My votes for the 1941 Retro Hugo Awards.

On the home front:  you can get an excellent idea of what Ray Palmer and Amazing Stories were all about with our The Best of Amazing Stories: The 1940 Anthology, published under the Amazing Stories Classics imprint by our licensee – Futures Past Editions. 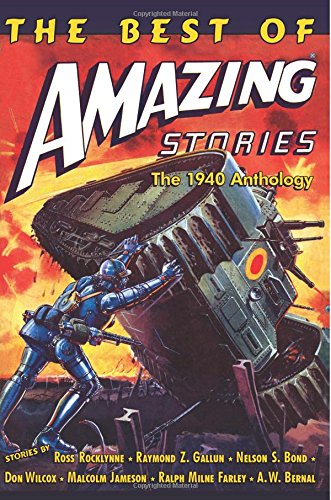 There’s also an excellent series of free ebooks that cover the 1940 works that are in the Public Domain that can be found here, just in case you want to read beyond the ballot.

Note: Category has 6 finalists due to a tie for 5th place.

Lets get the easy ones out of the way first.  But first:

In addition to looking at quality, I consider it valid to include consideration of historical importance for the Retros.  We’re not just taking a look back and judging what was the best in 1940, we’re also able to look at both the impact these works and people have had over quite a time distance, and we’re able to judge whether we think history has treated them appropriately.  We have a chance to address the injustices of time, if such exist.  But quality always remains the top consideration, for me.

If we go here, we’ll find Amazing’s roundup of eligible work resources, including a cover gallery.

Naturally, I’m tempted to be partisan and stick Paul in the first slot, but my appreciation for SF art prevents me from doing so.  By 1940 Paul was past his heyday and others were doing more interesting work.  Likewise, I was tempted to place Margaret Brundage in the top slot for all of the fine work she’d done previously (she is well deserving of a Hugo), but her offerings in 1940 are limited and not her best.  Finlay was much better at interiors and Bok, well, Bok probably deserves to win any year he’s nominated, but, and Cartier is interesting with a generally different take than most, but

Which in this case really is a stand-in for “best magazine”.

(First issues of 1940 edited by their respective editors.)

Dorothy McIlwraith, who edited Weird Tales during a shining period for the magazine probably deserves to be number 1.  However, Weird Tales is not Science Fiction (per se), and was never really a favorite of mine, and I’m therefore not as familiar with it as I am with the others.  That’s thin, but we’re supposed to vote on the merits of things we’ve actually read.

For this category, I’m going to go partisan and place Ray Palmer first.  Not because he edited Amazing (in truth, he took it in directions most of us disapprove of) but because of what he did with Amazing.  Almost single-handedly, he took a bottom tier pulp and turned it into a rival for the behemoth that was Astounding;  Amazing’s circulation actually eclipsed Astounding for a brief period under Palmer’s reign.  I think it safe to say that without Ray, Amazing Stories would have faded into non-existence by the time WWII had ended.

Fred Pohl was editing Astonishing Stories that survived on “gifts” from his Futurian friends and he did amazing things with virtually no budget, but there’s no doubt that the best of Fred’s work (as an editor) was still ahead of him.

Mort Weisinger was almost at the end of his run as editor of Thrilling Wonder Stories in 1940.  The magazine and its fiction had seen better days.

Campbell?  He needs to step aside, at least once.

For me, there’s really only two contenders:  Gray Lensman and Slan.

Laugh all you want, but I loved Smith’s Skylark series (even Skylark DuQuesne!), but was not as thrilled with the Lensman series;  perhaps I’d shed my affection for pulp era space opera by the time I’d gotten around to reading it (at, mmm, 12).

Slan on the other hand…I’ve re-read that any number of times.  For me, Slan is THE coming of age story, for Fans.  Jommy Cross will always be a hero of mine.

It comes down to two seminal, Campbell-era tales for me – Robbie by Asimov and Requiem by Heinlein.  Despite my great desire to give the top slot to the first-ever Robot tale, my heart belongs to Requiem, hands down.  D.D. Harriman’s determination has been a guide post for me for most of my life.

I don’t much care for Borges (yes, I know that’s a down-grade for me), but I do love me some Brackett, so

From here on out I’m going to favor votes over commentary.

Sturgeon deserves as much recognition as we can give him.  Farewell to the Master would be reinterpreted 11 years later as one of my favorite movies of all time (The Day the Earth Stood Still); Darker Than You Think is a genuine classic.

The Heinleins?  Proof positive that partisanship is not ubiquitous.  I’ve read both any number of times and they’re just not his best.

The Incomplete Enchanter is fabulous and influenced a lot of future works by many others.  The stories that make up that series are foundational for the genre.

I love me some Revolt in 2100, the 2nd American Revolution is a nifty concept (and Nehemiah Scudder is a perpetual bogeyman of the religious far right even today), but it’s gotten dated.  Magic never thrilled me.