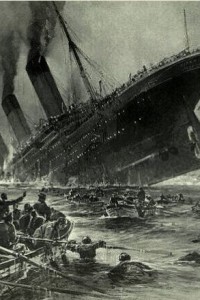 This year is the 104th anniversary of the sinking of the Titanic, which struck the iceberg on the 14th of April, 1912, and we remain just as fascinated by the tragedy as folks around the world were when the event occurred.  Numerous tragic sinkings happened before Titanic and many occurred afterward, up to and including the Costa Concordia in 2012, yet this is the one people research, write novels about and depict in blockbuster movies. There’s even an Australian billionaire building an exact replica of the Titanic, supposed to be launching in 2018.

Because the anniversary of the ship striking the iceberg falls on the date of my post, I’m going to talk about how Titanic inspired me to write my award winning science fiction novel with romantic elements, Wreck of the Nebula Dream.

Of course hundreds of books have been written about this tragedy in every genre from Young Adult to Nonfiction to Romance with zombies (really), yet only a few in the world of science fiction.  Some time travel tales, where the catastrophe usually can’t be averted. There was Douglas Adams’ mention of a ‘Starship Titanic’ in Life, The Universe and Everything. Later he created the “Starship Titanic” adventure game in 1998, and a novel entitled Douglas Adams Starship Titanic  was written by Terry Jones of Monty Python fame (who was a voice in the game, along with John Cleese). The latter book got pretty mixed reviews, mostly because it’s hard for anyone to match Mr. Adams’ tone and ‘voice’ as a writer. Here’s a post from the Amazing Stories archives about the novel.

The doomed ship Titanic is a particular fascination of mine, partly because there was a probably apocryphal family legend of my grandfather’s cousin traveling in Second Class and surviving the sinking. (The lady in question did share the same unusual last name but nowadays with the internet for research, I’ve come to the conclusion we’re not related.) Relative on board or not, I was thoroughly hooked since childhood by the tales of bravery and cowardice, and every emotion in between.

Titanic is the epitome of disaster. Premonitions. Too much speed on a clear night. Too much trust in the unsinkable technology. So many people, too few lifeboats.  The wireless operators staying at their posts, talking to the world on the internet of its time, Marconi wireless, yet no one could help. The Carpathia driving through the Atlantic, knowing they’d arrive too late. The Californian ten miles away, able to save everyone, yet unaware of the tragedy.  The musicians playing. The brave officers.  The lovers separated. Or staying on board together to drown.  The popular captain who’d never actually been in a sinking situation. The corporate executive who steps off the sinking ship into the last lifeboat and spends the rest of his life reviled. The steerage passengers, kept below too long. The rich, the famous, the children… I mean, the dramatic elements go on and on, yet it was all very real, and extremely sad.

Since I’ve done so much research into Titanic over the years, you might expect me to write a novel set on that ship. Two things kept me from it. (1) I feel Titanic is complete. Not to say I won’t keep reading books about it and watching TV/movies set on board, but as a novelist, the event feels done. My Muse isn’t inspired to go there. Not even with zombies, vampires or time travel! 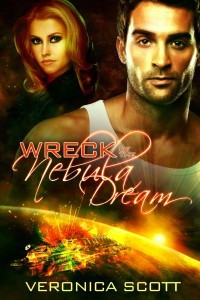 Which leads me to point (2): my Muse inspires me to write science fiction adventure/romance, with military heroes and smart, gutsy heroines, in perilous situations. So inevitably all that Titanic background and lore I’d gathered turned into science fictional catastrophe that strikes in the pages of Wreck of the Nebula Dream, set in the far future.

I looked to the events of Titanic for inspiration, not to do a literal retelling out in interstellar space. My plot includes things that would never happen in the cold North Atlantic. (No spoilers here!) But I also deliberately included two children among the small party trying to survive – Paolo and Gianna, who for me symbolized the many children who sadly perished on Titanic. There are some other subtle nods to the events of Titanic and a few outright similarities – the Nebula Dream is the newest, most advanced cruise liner of her time, with new engine technology, her captain and the company’s representative out to make a speed record at all costs…until….well, that would be  the story, now wouldn’t it?

There haven’t even been too many SF movies inspired by Titanic that I’m aware of. I think the scenes in “The Fifth Element,” where the fabulous cruise ship is breaking up, come the closest, although that catastrophe has a very different cause than striking an iceberg or an asteroid. I love that movie, by the way. We call it “Die Hard in Space” at my house. And there is definitely a romance between Bruce Willis’s Korben Dallas character and Milla Jovovich’s  Leeloo.

An old movie I love was the sort of low budget and oddly cast “Spacehunter: Adventures in the Forbidden Zone”, which opens with a catastrophe aboard a spaceliner. It’s only a brief plot device to get the three pretties marooned on a terrible planet where Peter Strauss and Molly Ringwald (???) can rescue them and have adventures. Ernie Hudson comes along for the trip and the terrific Michael Ironside is the villain.

The TV show “One Step Beyond” did a Titanic episode in 1959. In 1961, a short-lived show “The Way Out” did one and “Night Gallery” broadcast an episode called “Lone Survivor” in 1971, where the Lusitania picks up a lifeboat from the Titanic with one person on board. Oddly enough, Rod Serling never did a Titanic-themed episode for “Twilight Zone.”

So what would you have done if you were on the deck of the Titanic 104 years ago?

Here’s the story for Wreck of the Nebula Dream:

Traveling unexpectedly aboard the luxury liner Nebula Dream on its maiden voyage across the galaxy, Sectors Special Forces Captain Nick Jameson is ready for ten relaxing days, and hoping to forget his last disastrous mission behind enemy lines. He figures he’ll gamble at the casino, take in the shows, maybe even have a shipboard fling with Mara Lyrae, the beautiful but reserved businesswoman he meets.

All his plans vaporize when the ship suffers a wreck of Titanic proportions. Captain and crew abandon ship, leaving the 8000 passengers stranded without enough lifeboats and drifting unarmed in enemy territory. Aided by Mara, Nick must find a way off the doomed ship for himself and several other innocent people before deadly enemy forces reach them or the ship’s malfunctioning engines finish ticking down to self-destruction.

But can Nick conquer the demons from his past that tell him he’ll fail these innocent people just as he failed to save his Special Forces team? Will he outpace his own doubts to win this vital race against time?