Fire With Fire is quite good and serves as a nice example of how contemporary science fiction can blend a number of other genres seamlessly into one well-told story. 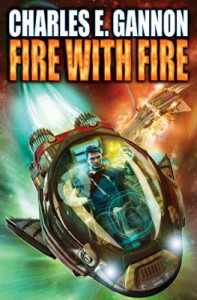 Fire With Fire, the debut science fiction novel by author Charles E. Gannon, is an engaging story that explores the idea of how humanity might react to first contact with an intelligent alien species.

In Fire With Fire, Cain Riordan finds he was not only put into a cryogenic deep freeze, which caused him to lose his most recent memories, but thirteen years have passed. The world has become a changed place and Earth has become smaller in the grand scheme of the Universe as humanity has developed FLT drives, allowing them to begin exploring the stars and settling distant planets. Given the turbulent times that came with interstellar expansion, the powers that be need a non-partisan investigator to look into the possible existence of intelligent alien life on a valuable planet that is in the process of being turned into a human settlement. But that is only the start of the political intrigue and suspense as Cain uncovering deeper truths about his brave new world.

Not only is Fire With Fire a well-written story, Gannon does a nice job of developing a smart plot filled with unexpected twists and turns that drive the story forward. Each new revelation leads to more questions that will keep you guessing about what may happen next, and the only way to find out is to keep turning the pages. The prose and the short punchy sections within each chapter create a quickened pace as the narration switches from character to character, developing much more depth within the story. The result is a wider view of a very complicated future.

Fire With Fire could have been told with just Cain Riordan’s narrative and it would have been just as good, but the authorial choice to give a variety of characters the opportunity to tell their own stories within the larger construct of the novel has the effect of creating a stronger and more dynamic future world. The only qualm here is that there was a fair amount of internal monologue that could have been expressed in other ways, but since it often served the purpose of explaining why characters were making the choices they made, it still worked within the overall story.

With the combination of suspense, mystery, and military intrigue, Gannon has created a science fiction novel that includes something for everyone. The only thing that felt a little off was the inclusion of several current day social hotspots and stereotypes that have cast long shadows into this future world. This is not to say that things such as sexism wouldn’t exist in the future, but that it is so easy to imagine that the worst parts of human society continue to exist. In many ways, the stereotypes that rear up tend to serve as social commentary on how entrenched humans are within our ways of thinking and behaving toward others.

In Starsight, the highly anticipated follow-up to Brandon Sanderson’s Skyward, we continue Spensa Nightshade’s journey as she strives to become the best fighter pilot in the Defiant Defence Force (DDF).

75 Years Ago today, the first ever Worldcon ended.

Plants have awareness and intelligence, arguescientists

Spanning Generations: SF That Can Excite Everyone