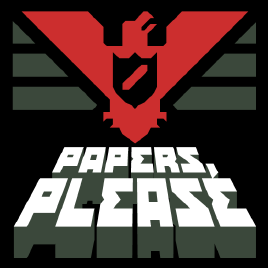 Papers, Please, a game by Lucas Pope for PC and Mac, endeavors to be boring. You’ll spend your hours as a border guard in 1982 Russia analogue Arstotzka, checking and double checking papers, living through terrorist attacks, insane directives from on high, and bribery attempts only to watch your family slowly starve to death as a swamp of rules drags you down into inefficiency.

And yet Papers, Please is the sort of game that’s so important, because it puts you in the shoes of someone who you might not be. Papers, Please is fun in the same way that filling in a spreadsheet is—that is, not—but while it’s not fun it is incredibly thought-provoking. It asks the age-old question: do videogames have to be fun?

My first exposure to videogames as anything other than fun came with preeminent PC gaming website Rock Paper Shotgun’s multi-part piece on the wonders of Pathologic, a Russian game about fighting a plague. Pathologic is brutally difficult, arbitrary, and overwhelming: rather than spend their capital to make a game you’d enjoy playing, Russian devs Ice Pick Lodge spent their time building a world that would beat you down and, when you tried to stand up, would beat you down again.

Pathologic unrepentantly isn’t fun, but it tells an incredible story. Instead of the traditional videogame narrative about becoming a living god, instead you play someone barely scraping by, someone trying to stay on the horse as it desperately bucks you off of it.

The world of Papers, Please brings to mind Pathologic’s unrelenting intensity. Surprisingly, for a game about cross-checking documents, it’s way more accessible than Pathologic, which trades on videogame tropes but makes them terrifying and oppressive. Papers, Please makes you feel like a good worker in the Communist system.

And from there, it helps you understand the complexities of things. It’s one thing for me, in a coffee shop in the middle of Massachusetts, to have opinions about immigration, racial profiling, soulless government workers, and border rights, but it’s much different when you’re placed into the role of one of those government workers. 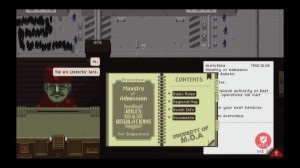 The crux of Papers, Please is the question: will you put personal success above the rights of your fellow humans? You’re paid by the number of border crossers you process correctly in a day. But, what happens when a young girl comes to you and tells you that a man following her is going to force her into prostitution? What about when a smuggler offers you piles of money to help him get contraband across the border? Or when a government directive comes down forcing you to racially profile?

These questions are what makes Papers, Please such a fascinating game, even if it’s not fun. It’s challenging, too, in the way that finding tiny discrepancies between nearly identical documents can be. But it’s about those questions, and they’re what make it interesting. Papers, Please shows videogames can be used not only to entertain, but to make you think about things bigger than yourself. More than that, it’s something they’re very good at: watching a despicable border guard in film wouldn’t be nearly as effective as placing you in their role, forcing you to ask these questions of yourself.

So Papers, Please carries a high recommendation if you’re interested in something more thought-provoking than the average game. Maybe it’s not fun, but that doesn’t make it something other than a worthwhile experience.