Big streaming news for the British Isles: FUNimation is trialling its FunimationNow streaming service to the UK and Ireland!

It’s difficult to even browse around the site from outside that area right now, but UK Anime Network’s tour of it appears to show that all simulcasts previously accessible from North America are now accessible there as well. That means you’ve now got access to Kumamiko, Endride, and My Hero Academia. 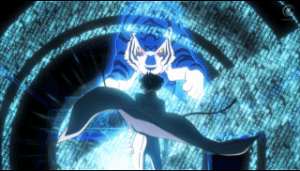 Bungo Stray Dogs premiere – Atsushi Nakajima is an orphan, lately kicked out of his orphanage and stalked by a spectral tiger. His luck begins to change when he pulls Osamu Dazai out of a river. Dazai, when not trying to commit a romantic suicide, is a member of a supernatural detective agency which is on the trail of the mysterious tiger. By the time the mystery is solved, Atsushi has found his calling as the agency’s latest recruit.

Most of you will not know that Atsushi Nakajima, Osamu Dazai, and other members of the Armed Detective Agency are named for major Japanese literary authors, nor that their powers and quirks are mostly references to their real-life counterparts. And you don’t need to! The show does an excellent job of establishing its characters as interesting and likeable people in its own right.

Throw in stylish visuals, and a nice balance of exposition and action, and what could have been a hopeless tangle of opaque in-jokes is off to a terrific start. The one warning I should give you is that Dazai’s obsession is played for laughs. 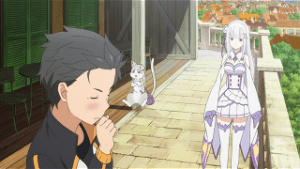 Re: ZERO -Starting Life In Another World- premiere – Re: ZERO‘s first episode is a full hour long, and that is a brilliant decision, because at the half-hour mark, it looked hopeless.

Subaru Natsuki is a shut-in pulled into a generic medieval JRPG world during a quick trip to the local convenience store. Being a gamer, he is highly trope-aware, so his first few minutes in the world are a whiny running commentary on how it isn’t meeting his expectations. Then a half-elf girl saves him from some thugs, he tries to help her in return and shows how clueless he is about the whole world, and they bicker a whole lot.

Just past the halfway point, they’ve got Most Annoying Anime Couple of the Year all sewn up and the viewer is starting to contemplate hoping they both die, the show suddenly gets much better. First, they do die. And then Subaru finds himself back at the time and place where he entered the world, and takes a completely different path through the day. And then dies again…

While it’s another “trapped in a game” show, it’s not the usual RPG but more like an adventure game where the protagonist has to figure out how to use all the objects available to him and the exact series of actions that leads to victory. And, in between whining and arguing, Subaru does have occasional moments where he seems like a good guy with positive talents. The fanservice is minimal, and there are hints of bigger things going on than just one guy popping into an alternate world.

It could all fall apart in episode 2, but this has at least earned a second look. 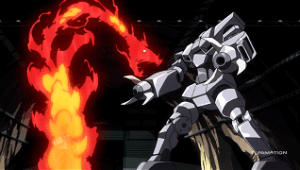 Concrete Revolutio #14 – It’s back, and with all the messy complexity you’ve come to either love or hate. This episode mostly takes place in 1971, and gives us a quick update on what everyone’s up to while filling in the missing piece of Detective Shiba’s transformation from enforcer of the law to terrorist.

The theme of innocence lost is back big time, as Shiba has an experience in many ways similar to Jaguar’s of seeing his younger self from the outside. Shiba, however, wants to go back to being that person, and embraces a terrifying absolutism in order to do it.

The story also revisits Kikko’s last encounter with Jirō from the first episode; the ongoing relationship between student protestors and kaijū; and the mad scientists experimenting on superhumans. Plus we get a guy and three alien parasites stealing a mech and jumping onto the back of a giant alien-human hybrid as it sails through a magic portal, which is possibly the most Concrete Revolutio moment that Concrete Revolutio has yet had.

This show is everything that it was before, and I’d love to continue this trippy ride all the way to the end. 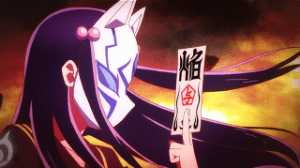 Twin Star Exorcists premiere – In a season full of unusually good-looking shows, Twin Star Exorcists still stands out. The scenes where its exorcists drop into the demon realm to kick evil butt are beautifully illustrated and choreographed. If the main thing you’re looking for is gorgeous but high-octane action, this is the show for you.

…but if you’re interetested in other aspects, umm, well. The main female character is introduced in the bath. The hero is introduced as he randomly hits on girls and then has a comedy boob faceplant. Most everyone else forms a kind of Greek chorus to explain why the hero is so awesome yet so tragic. The couple is brought together when the girl falls out of the sky onto the hero. (At least, contra the trope, she’s wearing clothes at this point.)

And while the girl spends most of the episode being a badass demon fighter, at the very end, she meets something that pushes her beyond the limit of her strength, to which the hero’s reaction is to patronizingly explain that she’s pathetic and useless, then defeat it in a matter of moments.

If you know someone who likes to complain that SJWs are destroying anime, definitely recommend this to them. If you like the action bits and have a very high tolerance for the rest, then go ahead and watch. Personally, I think I’ve seen enough. 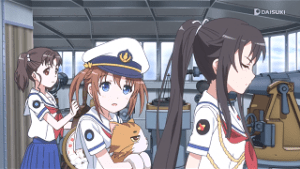 Haifuri premiere – Best friends Moka and Mike want to grow up to be Blue Mermaids, part of the force keeping the world’s oceans safe for commerce. There’s a lot more ocean in their day, because tectonic upheavals have sunk the coastlines, although not so drastically that anyone has felt it necessary to actually move inland, leading to some cool shots of drowned skyscrapers early on.

Anyway, jump forward a few years and Moka and Mike are entering Blue Mermaid high school, where they are immediately hustled onto contemporary-looking military ships and assigned ranks, and that is when the horrible truth becomes clear: This show was never really interested in exploring the ramifications of a world which has seen such wrenching changes. It’s all just an excuse for the latest exercise in mixing cute girls and military hardware.

So most of the episode is devoted to a very detailed sequence in which Mike’s ship is fired on. Controls are operated, ranks and names are recited, and communications systems are explicated. Eventually the girls decide to fire back, whereupon some people somewhere else make serious faces and announce that the ship has mutinied. Will this misunderstanding be cleared up? Probably not before several more episodes full of detailed command protocols and cute distressed expressions!

I blame the advertising department for this one. The show is perfectly clear on what it wants to be, and it’s a decent example of the genre; the disappointment is that it looked so much more interesting. 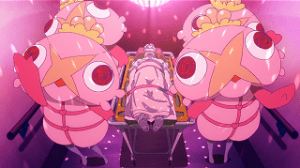 Kiznaiver premiere – Katsuhira Agata is unable to feel pain and barely registers emotions. When bullies beat him up for his lunch money, he hands it over just to minimize the amount of social interaction. One day, he wakes up on the roof of a strange building, where a woman subjects him to a long philosophical lecture about why he makes a terrible protagonist, and concludes by shoving him down a flight of stairs.

After an exceptionally trippy minute or two, Katsuhira wakes up again in a hospital, where it is explained that he and five other teenagers have been arbitrarily selected by an unknown authority to participate in an experiment where any injury to one of them is felt by all. Though they have nothing in common and their paths would have barely ever crossed otherwise, now they’re just going to have to learn to hang out together and be friends, or something.

I’ve never seen a show spend so much time explaining in such a straightforward manner that it has a lousy premise. Crowded out by all the exposition is any chance at getting to know and like the characters. Katsuhira’s one moment of attempted humanization is that he makes a special effort to look up the skirt of the woman who’s just pushed him down the stairs. Some of the others don’t even make it as far as being one-note ciphers.

Like so many other shows this season, Kiznaiver has a distinctive style that’s nice to look at. But if you listen to it, you can hear it telling you all the reasons why you should stop watching. 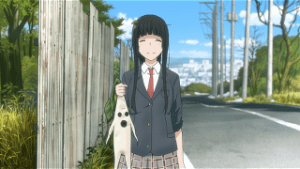 Flying Witch premiere – Makoto Kowata is a ditzy but independent trainee witch. At the age of 15, she’s considered an adult in the wizarding world, but her parents want her to finish high school, so as a compromise, she moves from the big city to the lushly illustrated countryside of Aomori Prefecture to finish out high school while living with a cousin.

There’s no high-stakes drama here, just a light, pleasant story about Makoto settling in and the reactions of those around her to the revelation that witches are real. Everyone is basically sane and decent; Makoto’s blasé attitude about dangerous magic is played for laughs rather than horror.

This show is not ambitious, but achieves what it wants to beautifully.

There are two more premieres coming– Onigiri and Big Order— but it’s time to start thinking about what to follow for the rest of the season. Concrete Revolutio is in for the duration, and Bungo Stray Dogs and Re: ZERO deserve a shot. From last week, I’ll catch up on Kagewani -II-, The Lost Village, My Hero Academia, and Kumamiko. (Sailor Moon Crystal has picked up any additional territories, sad to say.) Somehow, this will all get pruned down to five or fewer shows. Stay tuned!

Talking Titanic in Space 104 Years After the Tragedy