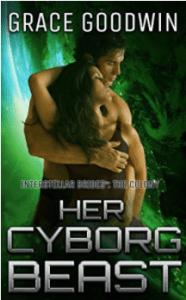 Grace Goodwin has a very interesting series going, with a central theme of a colony where damaged soldiers are forced to dwell after they’re rescued from the alien enemy Hive. Seems the Hive implant any captured soldiers with suspicious tech that can’t be removed. I’ve been enjoying the varied tales of the Interstellar Brides who end up on Colony one way or another and meet their ex-soldier match. The latest is Her Cyborg Beast, and here’s the plot: Caroline Jane (CJ) Ellison has a gift for analysis. When a Wall Street deal goes bad, the choice between prison or the Interstellar Brides Program is a no-brainer. She’ll go. She’ll leave Earth, her past, and her mistakes behind. The decision is logical, not emotional. Until she wakes up on another world with a huge Atlan Warlord, her matched mate, refusing to claim her.

Warlord Rezzer is contaminated. Weak. The Hive captured him and stole his soul, his very beast. A mate is out of the question when he can’t become what he was born to be, a beast, her mate, her protector. Forced into the Brides Program testing against his will, Rezzer has no intention of claiming the beautiful, sassy female who arrives on the Colony. The Hive stole his beast, but not his honor. He vows to give her to another, a worthy male, a beast who is whole — one not hunted by the Hive as part of a dangerous new experiment to win the war.

CJ takes one look at the wounded warrior before her and knows she will never be able to let him walk away. He’s hers now, her perfect match. And if that means she has to seduce the beast or face off with the Hive to save him…that’s exactly what she’s going to do. She lived her life following the rules. With everything on the line, it’s time to break them. 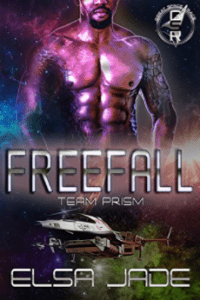 There’s an entire collection of six books centered around the concept of The Great Space Race, a reality show of the future which may or may not be on the up and up.  Everyone entered has their own reasons for being there and the authors not only had a shared concept, they made some effort to have characters from one book appear in some of the others. The books have been releasing all month and the most recent four are:

Freefall: Team Prism by Elsa Jade:  Scarred by life and scared by it, Amy Long finally found peace in quiet Sunset Falls, Montana…until a malfunctioning popcorn popper transports her across the universe.

She arrives accidentally—and nekkidly—on the honeymoon cruiser Blissed where the widely viewed and wildly entertaining Great Space Race is already in progress. Now if she ever wants to return to Earth, she has to pretend to be the famous intergalactic explorer who was supposed to be half of Team Prism, searching for the legendary Firestorm Queen’s Prism.

Can this unsuspecting Earther wrap her head around a universe of aliens and adventure? While she’s at it, maybe she’s gonna wrap her arms around the uptight but sexy drakling male who is her teammate…

Flare: Team Corona by JC Hay: They could go all the way, if they don’t go straight to hell.

All Kayana wants is respect. Jilted by her fiancée, turned out by her family, and rejected by her crew – esteem is in short supply. When she hears about the cash prize for winning the Great Space Race, she realizes it’s more than enough money to get her old life back. Or buy herself an asteroid someplace where she won’t care what people think.

Ax Turner just needs to hide, and the Race gives him the best opportunity to do so. In plain sight. Surely the thugs and criminals he’s ripped off won’t come after him while cameras are rolling on the galaxy’s most popular reality game show. And if they do, well, having a partner who’s able to fight and looks like a devil seems like a win… 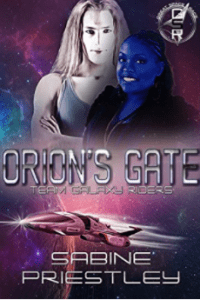 Orion’s Gate: Team Galaxy Riders by Sabine Priestley: The emotions evoked by the passionate alien empath could kill them both… Trapped in another galaxy and forced into a deadly contest, Armond Nolde wants one thing: Win so he can return home and continue his life’s work as an Earth Protector creating portals.

His assigned partner, Vin, is large, passionate and overly talkative. She’s everything Armond is not. An Empath, Vin is fascinated by the emotionless albino. He’s easy on the eyes and cold as space—or so it seems.

Armond soon learns that Vin possesses an intelligence that rivals his own. When he is forced to connect with his psi to save Vin’s life, she discovers his deadly secret. More powerful than any psi before him, his control is slipping. Threatening to unleash a deadly force.

If they bond it could destroy them both.

Ceasefire: Team Orion Nebula by Kayla Stonor:: Qui are the enemy. Kill them all. Save the human genome! Sworn to destroy the shapeshifting alien warlords who invaded Earth, Ahnna Sokovik must now partner with her nemesis in a nightmare reality show, the GREAT SPACE RACE. To survive deadly challenges—entertainment for trillions of fans—Ahnna must befriend her adversary and pray he doesn’t murder her in her sleep.

Fanatic, terrorist, xenophobe maniac… Ahnna cannot be reasoned with! Tierc Marcel, a Qui-human half breed, is faced with an impossible task, live alongside Ahnna, the gorgeous femme fatale who nearly slit his throat. … 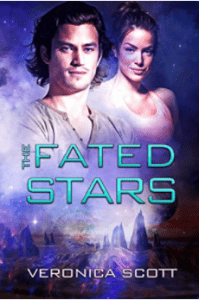 And I’m happy to say that I too have a new SFR release, with The Fated Stars. My daughters have been challenging me to write a badass female soldier for them, so the heroine of this new book is the top mercenary in the Sectors. Here’s the story: Larissa Channer, a tough no-nonsense mercenary in the Sectors, is celebrating success on her last job and a big bonus, with no slightest thought of taking on another assignment anytime soon. Out for a night of carousing with her friends at a third rate carnival on a backwater planet, she walks into the tent of a fake fortune teller and finds herself confronting the most intriguing man she’s ever seen. But something’s wrong, ominous currents lie beneath the surface of their encounter and Larissa can’t leave well enough alone.

Samell, a powerful, high born empathic priest, has been kidnapped from his own primitive planet along with a number of his people, and sold to the shady operator of an interstellar carnival. Kept enslaved, pretending to be a fortune teller while forced by his captor to steal information from the minds of all who come before him, Samell despairs of every breaking free.

Until Larissa walks into his tent and he recognizes the warrior who might mean the difference between life and death.

The situation becomes dire when Larissa and Samell come to the attention of the Shemdylann pirates who kidnapped him in the first place and the deadly Mawreg, aliens who threaten the Sectors. Can she save herself and the empathic alien noble, and derail the Mawreg plot against the Sectors? And will the soldier end up with her prince when all’s said and done? 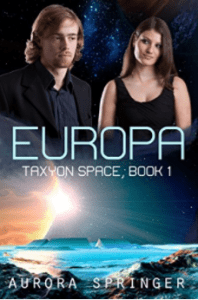 Another new release I’d been waiting eagerly for is Europa by Aurora Springer. She’s been sharing snippets of the book for a while now on a weekend blog hop and it’s all been quite intriguing! The plot:  What alien creatures lurk under the icy surface of Europa? Dr. Nikki Bell’s plan to discover intelligent life hits a rocky start when her spaceship crashes on the icy surface of Europa. Seconds before she blacks out, she spies a man’s face in the water beneath the ice. When she wakes on the submarine Station, nobody believes her story. Convinced the mysterious stranger saved her life, Nikki searches for him while she explores the ocean and its alien inhabitants.

Kiron Arqin Ramis chose exile as a Watcher on a remote outpost to redeem his family’s honor. He never expected to find an attractive Earther woman close to death. He violates the prime policy by rescuing her. Despite suffering the penalty, he strives to warn her about his hostile leaders.

Nikki’s unexpected meeting with Kiron triggers a chain of disasters in Europa’s perilous oceans. Can the daredevil scientist and scarred Watcher forge a new alliance despite their people’s antagonism?

Wishing you a very Happy Thanksgiving if you celebrate the American holiday this week and happy reading to everyone, everywhere.

EFF and John Scalzi team up to highlight the “right to repair”. Did you know auto manufacturers own the copyright on your car’s engine?