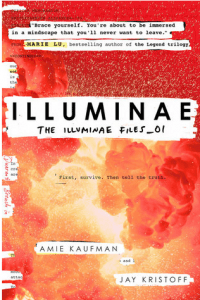 One of the few books I’ve ever read on the kindle that I then went out and bought as a hardback is Illuminae by Amie Kaufman and Jay Kristoff. The way the story is told through e mails, briefing notes, ship diagrams, an Artificial Intelligence’s inner dialog expressed as words in images, discussion between the AI and the main character Kady placed against interstellar backgrounds….it’s hard to describe adequately but it’s WONDERFUL. Trust me. And I wanted to see it displayed on the page and really be able to absorb the plot all over again.

I see Illuminae as somewhere between a regular book and a graphic novel, which is a cool place to occupy. Challenging to do well but these co-authors manage it.

This is a Young Adult novel but it has space battles, zombies, hackers, artificial intelligence and yes – wait for it – romance with a hardwon Happy For Now ending that satisfied me.  I really enjoyed this book, which I don’t think is unusual at all when it comes to YA science fiction these days. The best of the YA novels appeal to all ages, as any well told story should. The unusual format adds to the reading pleasure, once you wrap your head around it.

Here’s the story (courtesy of Knopf Books for Young Readers): This morning, Kady thought breaking up with Ezra was the hardest thing she’d have to do. This afternoon, her planet was invaded.

The year is 2575, and two rival megacorporations are at war over a planet that’s little more than a speck at the edge of the universe. Now with enemy fire raining down on them, Kady and Ezra—who are barely even talking to each other—are forced to evacuate with a hostile warship in hot pursuit.

But their problems are just getting started. A plague has broken out and is mutating with terrifying results; the fleet’s AI may actually be their enemy; and nobody in charge will say what’s really going on. As Kady hacks into a web of data to find the truth, it’s clear the only person who can help her is the ex-boyfriend she swore she’d never speak to again.

Told through a fascinating dossier of hacked documents—including emails, maps, files, IMs, medical reports, interviews, and more—Illuminae is the first book in a heart-stopping trilogy about lives interrupted, the price of truth, and the courage of everyday heroes.

Here’s a quote from the interview Jessie Potts of USA Today Happily Ever After did with the authors in October, 2015, talking about the unique way the book is laid out:

Jessie: How was setting up the forms and such?

Amie: It flowed a lot more easily than you might imagine. Illuminae’s made up completely of documents put together by a group of hackers — so it’s all e-mails, IMs, security reports, video transcript, schematics, movie posters, comic strips and the meanderings of a mad artificial intelligence. For each piece of the narrative, we’d consider a bunch of different options, and ask what they’d bring us — whose POV did we want to be in? Who knew what at this stage? Did we need to provide information, or an insight into someone’s personality or state of mind? How would the reader most easily digest what we were saying? The variety was heaps of fun to write, as well. One day you’d be a pompous IT guy, the next a frat-boy Marine.

Jay: I’m usually a pantser when it comes to writing, so this was the first time I’d done such intensive mapping, but you can’t co-author without a roadmap or you end up in two different states. We became the masters of GoogleDoc Fu. Lots of spreadsheets tracking death tolls and distance traveled and whatnot. The design process came afterward — it really began in earnest after the manuscript was complete. It was important to us that the story came first, and the design second. We wanted the alt format to augment the reader experience, but never be a crutch.

I remember a classic hard science fiction story that I’ve sadly forgotten the author and title of, which was told as an exchange of transcribed com messages between two former shipmates. The plot was something about an intergalactic cargo ship sailing into disaster for various, ever-worsening FUBAR reasons. The story had the sarcastic, tongue in cheek, yet serious style of the wonderful Christopher Anvil. It might even have been by him. It was the first story I ever read that wasn’t told as straight-forward prose and all these years later, I still remember it, partly for the format, which was highly unusual at the time.

When done well, as Illuminae certainly is, the tale remains in your mind, rather than slipping away after you close the cover, as so many otherwise really good books can do.

This is not a romance in any sense of the word, but the romantic element was present at an appropriate YA level , I loved it and so there you have my opinion for this week’s post!

I do! Let me introduce myself.  I’m an astronomer, a professor at the University of Wyoming, and a science fiction writer.  I’ve been blogging for a number of years at www.mikebrotherton.com, primarily about the intersection of science and science fiction, and I plan to do that here, too. Let me start by making a case […]