Devil or Angel is a highly enjoyable read with a lot of solid writing…and some confounding problems. 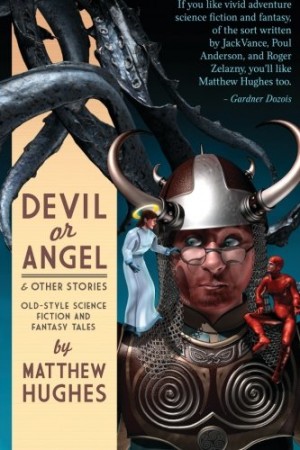 It is rare for me to put a book down without finishing it. The main reason is, of course, that I mainly choose books that I have a reasonable expectation that I will like (ie: books from authors whom I have already read and enjoyed, books that come highly recommended by people I trust, books with premises that intrigue me, etc). Even when I’m not enjoying a book, I usually find a reason to slog my way through it to the end (most often, as a negative example of how not to write).

I must say that I was tempted to abandon Matthew Hughes’ Devil or Angel & Other Stories, a self-published collection of previously published work, after the first story, having found it highly problematic. Fortunately, I persevered, and was slowly won over by Hughes’ solid writing and characterization and some terrific ideas. This experience validated my policy of reading books through to the end.

In fairness to Hughes’ writing, let me start with what worked for me.

In “Hell of a Fix,” Hughes makes exactly this argument. Finally!

Now, you might think that, in the absence of a deal, the story would grind to a halt. Fortunately, Hughes has a neat trick up his creative sleeve: in refusing the pleas of increasingly higher level demons to cooperate, Chesney Arnstruther, the protagonist, eventually precipitates a strike in Hell. No more will demons from hell perch on the shoulders of mortals and tempt them into sin.

Now, you might further think that this would leave the world a much better place, but, in fact, people soon become lethargic and unmotivated. In Hughes’ view sin drives humanity to achieve: greed makes people want to have jobs and make money, lust drives our relationships, vanity drives our need to succeed, and so on. I’m not sure that’s good theology, but it propels the story in an interesting direction: forcing heaven to negotiate between the parties to get Hell’s unions back to work again.

Each is a page or two long, just long enough to set up a situation involving Hughes’ travelling sage and bring it to an unexpected resolution. Although set in Hughes’ far future Archonate universe (the only story in the collection connected to his novel series), the parables in the story have a timeless quality to them, as does the best Sufi wisdom (to which Hughes compared the story in his introduction).

This was the highlight of the collection for me; I would be delighted if there was a complete volume of nothing but Liw Osfeo edifications.

I must admit that I don’t understand the attraction of stories about life on Mars now that we have a pretty good idea that if it did exist it likely never became more complex than amoebas. Nonetheless, “Ugly Duckling,” in which an anthropologist tries to learn something about an extinct Martian race before their homes are demolished was well realized and maintained my interest.

Short short stories are an art in themselves: how few words do you require to relate something meaningful? “The Hat Thing” is only two and a half pages long, but it’s amusing and clever.

The Not So Good

Hughes takes it as self-evident that his reader will recognize the positive qualities in the fiction he is trying to emulate, so much so that he does not feel the need to elaborate on them in the introduction. I wish he had. A lot of the science fiction and fantasy from that period was ridiculously sexist (a holdover from the pulp magazines of the 1930s and 1940s that featured scantily clad women being rescued from aliens by muscle-bound men). It was also almost entirely white and, arguably, pro-imperialist. In short, it contained a lot of baggage that would not be acceptable to many modern readers.

This is not to suggest that Hughes had a responsibility to defend the style of speculative fiction he wanted to write against these charges. What I am suggesting is that, had he simply discussed what he had admired about the fiction that served as his model, he would have quieted the alarm bells that went off in my head before I had even read a single story.

The lead singer of a rock band who is deeply into sex, drugs and alcohol. A gold-digging woman who latches on to him who just happens to be blond. Yes, there is often truth in stereotypes; however, it is only a small part of the more complex truth that is a fully realized human being. In any case, we’ve seen types like these so often that they have become trite, even if they appear in an original take on the afterlife.

The thing that irks me the most about this is that it is very easily corrected. To be sure, you can’t create a three dimensional character in a short story, but you can suggest depths to characters that you cannot fully explore. The easiest way to give a character a secondary trait that seems to conflict with his/her primary trait (the hard-living rock star who cries reading pulp romance fiction, say) or, at the very least, a trait that doesn’t fit the stereotype (the blond Caucasian gold-digger who enjoys making origami dragons).

Complexity makes fictional characters interesting, and it can be suggested with just a couple of lines or a short paragraph.

I was reminded of this while reading “Devil or Angel” because only two of the five band members in the story are named. The others are identified once by the instrument they play. Granted, everybody dies soon after they are introduced, and the three unnamed band members are never heard of again. Still, giving them names would help to give them a little character (since names often contain clues to a character’s ethnic, religious or other background); add a line or two about them, and they could actually be interesting.

This, I think, is a problem with a lot of the speculative fiction of the 1950s: the idea that the only information a piece of writing should contain is that which is necessary to convey the plot. This can be one reason characters in these stories can seem thin (sometimes to the point of stereotype): once you have established that the main character is a strong, heroic type, any other information about him would just slow down the story.

I’m not sure this was ever acceptable; even in the 1950s, this trend resulted in science fiction having a reputation for shallow writing. Now, simple things like naming minor characters and giving them some traits is recognized as an important aspect of creating a believable world in which stories are set. (I must also say that, in this particular case, the absence of names was glaring, an omission that immediately took me out of the story rather than keeping me in it.)

My desire to be analytical has, I think, imbalanced this review, so, to be clear: the title story notwithstanding, Matthew Hughes’ Devil or Angel is a highly enjoyable read with a lot of solid writing.

Do Not Disturb! Creativity in Progress

Israeli author and traveler Lavie Tidhar discusses the World SF blog, traveling the world for inspiration and his latest works.