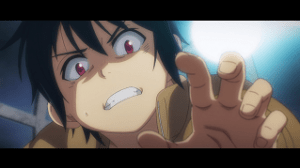 ERASED #7 – Satoru jumps back in time to 1988 again, and decides the hell with it, he’s going to step up and change history no matter how weird everyone thinks he is. This leads to having to semi-confess to Kenya what he’s up to, and probably rousing his mother’s suspicions as well.

Satoru takes matters into his own hands by arranging Kayo’s disappearance himself, providing Yūki with a watertight alibi, resisting the urge to murder Kayo’s mother, and setting up Kayo with a snug little hideout, which he, Kenya, and Hiromi then proceed to leave a really obvious trail through the snow to. Argh.

Because the trail is so obvious, the person sneaking into the bus could be the super-competent murderer, or they could just be a responsible adult trying to be helpful.

It’s time to step back and speculate who Nishizono might be in 1988. As it was pointed out a couple episodes ago, if he’s in government, he’s probably using his real name– in 2006. This doesn’t rule out him using an assumed name in the past, or being in a situation where people assume his last name is different. The man living in Kayo’s apartment, for instance, turns out to be her mother’s boyfriend, not her father. He doesn’t seem like the careful, plotting type though.

The only other adult males presently available are Yūki and his father, who were both still suspects after the culprit tried to redirect suspicion by killing Hiromi; Sawada, who was at the hospital while Nishizono was following Airi; and the teacher, whose family name is given as Yashiro. He’s the only one not definitively ruled out, and has a certain physical resemblance to Nishizono, yet a teacher should have had to establish his identity fairly well too.

There are a couple other small possibilities. One is a name change, in which case all bets are off. Another is that Nishizono is around under an alternate reading of his name. Kanji, the characters borrowed from Chinese, have been retrofitted to representing Japanese words in such a way that one character can have several different pronunciations. This still doesn’t work for Yashiro, whose name is written 八代 as opposed to 西園 for Nishizono. 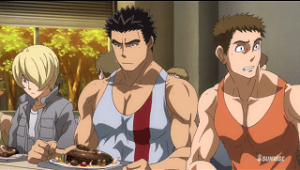 Mobile Suit Gundam: Iron-Blooded Orphans #20 – At last Tekkadan has reached its goal of bringing Kudelia to Earth, only to learn that it is the planet of is too much gravity and too much moisture and weird slimy alien food. Also, there turns out to have been a teensy little flaw in Kudelia’s plan all along, in that the ruler she hoped to petition is not just out of power but in outright exile.

The sight of the battle-hardened space mercenaries freaking out at the sight of fish is a much-needed comic interlude before the weight of reality comes crashing in again. Now they have to fight Gjallarhorn on its home turf if Kudelia wants a chance to really help Mars. And while Kudelia is now the face of a moderately successful revolution, it came too late for Savarin.

Meanwhile, Ein’s near-death allows for the explanation of yet another prejudice of the ruling classes: cybernetics are considered deeply wrong for vague symbolic reasons having to do with the long-ago war that produced the Gundam mechs. In parallel, Yukinojo reveals that he has such prosthetics, providing a reason for why he sided with the outcast kids back at the start of the story (aside from being the only completely trustworthy adult in the whole show).

With an opening to hook up a Gjallarhorn pilot with the normally banned super-special control system, Fareed gains a tool who has a chance at beating Mikazuki. 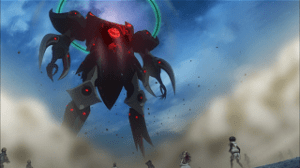 BBK/BRNK #7 – Fresh off of defeating all of Reoko’s henchpersons individually, Azuma and friends join up to take on the “headless” buranki. Unfortunately, new improved Ōbu isn’t strong enough, and Entei’s core isn’t strong enough either. It then develops that a buranki heart is compatible with any matched set of limbs, so an Entei/Ōbu mashup is quickly formed that can defeat it.

There’s a lot of new information about the bubuki and buranki in this episode. For a start, a set of limbs can function just fine without a head/heart component, only it becomes a horrifying alien monster that wants to destroy all life and remake the world.

The limb bubuki are very adaptable to their context. The new set of bubuki that Matobai brings quickly assume the same forms as the ones that he, Arabashiri, Tsuwabuki, and Hazama were wielding before, and Ōbu’s limbs modify themselves to match Entei when temporarily under Reoko’s control.

The heart bubuki, on the other hand, come in one standard model. That, plus the fact that they aren’t strictly necessary for a buranki to operate, suggests that they were developed separately to control the other bubuki. 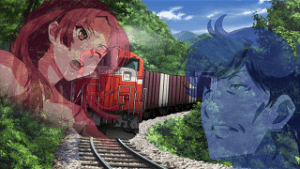 Active Raid #7 – It’s Hoshimiya’s turn in the spotlight, and she is revealed to be not only a major infrastructure geek but the inevitable Pink Ranger. In fact, with the debut of the proper full opening this week, it appears that every single person in Unit 8 has their own personal Willwear and will have to experience a slightly embarrassing transformation scene at some point.

Logos, or at least one member of it, isn’t above meddling in politics. Whether it’s at the behest of the prefectural governor or on their own agenda isn’t clear, but the end result is a complicated plan that ends in the murder of this week’s suit-operating patsy and the suicide of his employer. Well, apparent suicide…

This is the second episode in a row that’s ended with a sudden death. Dr. Kasumigaseki was old, and he’d just had a hard day refurbishing his old robot, and it fits narrative expectations that he could die peacefully after reliving his dream one last time. But after a second coincidental death, it seems like there’s more going on here. Perhaps there’s a deeper plot at work where Logos provokes incidents that are providing cover for murders.

Or we could just be dealing with a writer with a tendency to repeat himself. You never know. 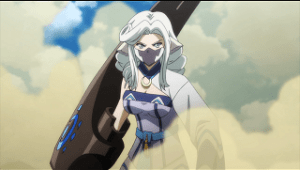 Utawarerumono: The False Faces #20 – Going up against Tuskuru is proving a much bigger challenge than Yamato has ever faced, because Tuskuru has its own magic/technology that can counteract Yamato’s masks. This leads to a lot of inconclusive skirmishing in which no one of any importance is really threatened.

The main point of this episode is to break out more characters from the first Utawarerumono. Benawi and Kurō both served with Hakuōro, the founder of Tuskuru and protagonist of the first story. And it’s revealed that Kuon is Hakuōro’s daughter.

This has rather less weight than it should, because Haku still doesn’t know a thing about the person he was named for and probably won’t bother to ask for a long time. If only a few minutes of pointless hijinks from the first half could have been displaced by some buildup. It’s just another missed opportunity out of many.