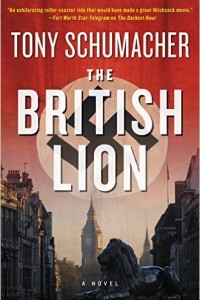 Last year I reviewed the surprisingly good The Darkest Hour by Tony Schumacher. Admittedly it featured an alternate history done to death (Nazi occupied Britain), but the strength of the book comes more from the story than the alternate history. The main character, John Rossett, is a British collaborator who one days awakens to the horrors he has helped commit and decides to risk everything he has to help one Jewish boy escape Britain. It was a pretty powerful, emotional story and it is difficult to top, but Tony took up the challenge and released a sequel to the novel titled: The British Lion. Is it as good as the first or does it suffer the same curse as many other sequels? Lets find out.

The British Lion begins shortly after the events of The Darkest Hour (so stop reading this review now if you don’t want the ending ruined). Rossett’s boss, Ernst Koehler, is desperate to save his career so decides to cover up Rossett’s actions by saying he was actually working undercover to fight the British Resistance. Rossett agrees to play along, not only to prevent the Germans from going after Jacob, but also to finally return to being a police officer. Things don’t go well for either man as time goes by. Rossett discovers he is hated by almost everyone due to his connections to Germans and Koehler begins to harbor doubts about what his people are doing to the Jews.

This makes the latter a perfect tool for a faction of Americans who kidnap his wife and daughter and tell Koehler that if he ever wants to see them again he needs to turn over a Jewish scientist named Ruth Hartz to them. Ruth is working on the atomic bomb for the Germans in Cambridge and the knowledge of that weapon can give the Americans an edge over the Germans. Koehler asks Rossett to help, who agrees because he knows what it is like to lose your family and wouldn’t wish that anyone. Things, however, go from bad to worse when Koehler’s wife is killed during the course of the kidnapping and his daughter escapes only to become a pawn of the different factions of the British Resistance who want Ruth so they can trade her to the Americans.

Lets get some nitpicks out of the way since they are minor issues and I have talked about them elsewhere. First, I don’t like the cover. Using swastikas for WWII alternate history books is used only for cheap shock value and it is done so often it has become cliche. To be fair, authors don’t usually have control over book covers, as Tony confirmed himself in the comments section of one of my videos and other editions of the book won’t feature a giant swastika. Still it annoys me that publishers can be so lazy sometimes with something that can say so much to a potential reader.

Second, I have said plenty of times elsewhere that a German invasion of Britain during WWII is incredibly implausible. Tony did go into more detail how it could have worked in an interview he did on my blog, so if you want to know more go check it out. That being said, implausible points of divergence like a successful Operation Sea Lion don’t always bother me when it comes to professionally published fiction. As long as the story is good, I can forgive authors for stacking the deck so they can get the scenario they want to play in. 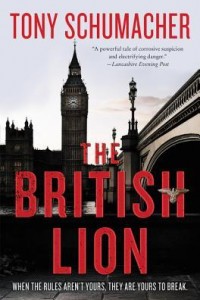 Lucky for Tony, The British Lion is good. In fact, its very good. The characters continue to be complex, the action is great and we get to see more of occupied Britain. What I think I liked best about the book is the anxiety it gave me as I read it. Let me explain: all the characters have their plans and motivations, but just like real life, things go wrong. In fact, things often went spectacularly wrong in the book and seeing how the characters improvised (or failed) was fun to read…and yet man did it get tense waiting to see what was about to happen to send everything topsy turvy. The British Lion definitely does both the thriller and alternate history genre proud.

I also enjoyed the tidbits of information we got about the rest of the world. We know that America under the isolationist President Charles Lindbergh is moving farther to the right and wants good relations with Germany. Japan, meanwhile, has conquered China, although one comment suggested that the Germans were fighting Soviets and Chinese out east so it makes me wonder how far the Germans got in Eurasia. More importantly, it means Pearl Harbor likely didn’t happen in this world, which brings up more questions in my mind, but I won’t bore you with all of them. We are starting to see some more world building from Tony and that’s good news to me. Alternate history has always been a genre that emphasizes good world building and if we see more books fleshing out the world Rossett inhabits, I’d be happy.

That being said, since The British Lion is a sequel, we find ourselves forced to compare it to The Darkest Hour. Is it as good as, better or worse than the first one? Well…and I hate to say it because I really did enjoy reading The British Lion…but I found that when comparing the two books that the stories were a little too similar. In both stories Rossett is trying to get a Jew out of Nazi-occupied Britain. Sure the exact individual, motivations and the stakes are different, but at least in the broad strokes both stories are the same. Again, I liked The British Lion, I really did, but if there is going to be a third John Rossett book, I would like to see something different. There are only so many times you can see the main character do the same thing before you get tired of it.

So I think I can say with all honesty that The British Lion is as good as The Darkest Hour, but I do hope we see Rossett do something different in the near future. Tony Schumacher is writing award-winnig level fiction here and I would love to see him continue to do it for a long time.

Review: One Year After by William R. Forstchen

As I mentioned last week, trying to draw general conclusions about the relationship between mainstream literary fiction and speculative fiction is difficult at best. For every “general” hypothesis, a slew of counter-examples can be raised which undermine its veracity. If, however, we think about both genres as falling somewhere on various probabilistic spectrums, then generalizations […]

And Thanks for All the Fish