There’s nothing wrong with approaching a well-known story from a new angle and throwing out preconceived notions we may have about it. Handled correctly it both keeps knowledge of the traditional beats from overwhelming the experience and compliments (if not enhances) the original.

The rewards of such an approach are obvious – taking advantage of the built in audience understanding of a familiar work while drawing on a desire for the new – but so are the risks. New takes can’t help but be compared to their original versions, giving them a higher bar to surmount that an original story wouldn’t necessarily have to deal with.

Joe Wright’s Pan is in just such a pickle as it reimagines the classic personification of childhood as a foundling left on an orphanage doorstep to come of age in the middle of the Battle of Britain. 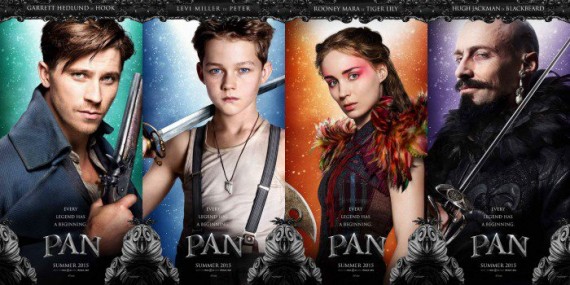 The opening of Wright’s take on the now classic Peter Pan story owes a lot to Andrew Adamson’s Narnia films and The Wizard of Oz, positing a slate grey world full of bombs and misery which will soon give way to land of wild color and wilder lunacy. Expertly melding the whimsy of fantasy with the seeming realism of cinema, Pan starts off on a high (literally) as Peter (Miller) escapes from the kind of orphanage where everything a young boy could imagine happening – the head nun really does have a booby trapped office for storing ill-gotten gains, she really is selling the orphans to pirates – is actually happening.

Landing on a flying pirate ship being chased through the London skies by Spitfires hunting German bombers, Pan briefly manages the anachronistic stew which typifies the best of British fantasy and which its American cousins rarely seem able to master. The first thirty minutes are so charming and effortless, anchored by an equally winning Miller; they portend a greatness the rest of Pan is unable to deliver.

The hat tips to other works the film starts off with are not the last or the least of such borrowing and it quickly becomes obvious that the ‘new’ angle Wright and screenwriter Jason Fuchs (Ice Age: Continental Drift) have struck upon has little new about it. The realization comes shortly after Peter arrives on a strange island he will come to know as Neverland to the sounds of thousands of slaves being led in a chorus of ‘Smells Like Teen Spirit’ by the irrepressibly malicious Captain Blackbeard (Jackman).

Neverland itself looks not so much new as outsize thanks to fantastic work from production designer Aline Bonetto (Jean-Pierre Jeunet’s designer of choice) and set decorator Dominic Capon. They bring strange life into everything from Blackbeard’s fairy dust mines to the flying pirate ship anchors and the secret fairy world, giving photographers Seamus McGarvey and John Mathieson ample opportunity to play with strange colors and palettes.

The visual effects work and 3D is nearly as good, except for the Neverbirds which horrifically betray their digital heritage. But it’s all only skin deep – a new gloss covering up a bog standard hero’s journey narrative as rote and uninteresting as Neverland is bright and colorful. 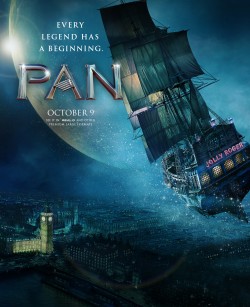 Wright and his collaborators have, barring the superb opening, kicked out the whimsy of Barrie’s original in favor of a very, very conventional adventure story featuring Peter as Chosen One, a secret prince prophesized to defeat Blackbeard and save Neverland if only he could overcome the emotional turmoil of his mother’s abandonment and learn to believe in himself.

It’s all very Spielbergian; in fact in many places Pan reminds strongly of Hook, Spielberg’s own chaotic visit to Neverland which in a search for its new approach also lost its way. Except it’s even more conventional at heart filled cues which should sound very familiar as Peter hooks up with a roguish captain and a stalwart princess to search for the hidden fortress the fairies of Neverland have retreated to.

The narrative laziness would be less obvious if anyone but Peter was at all interesting but strange conceptual choices and the archetypal characters the rest of the cast have been stuck with haven’t inspired the performances. Jackman knows how to chew scenery, but the decision to recast James Hook as some sort of western outlaw with a nasally gravel filled drawl living somewhere in-between Harrison Ford and Jack Nicholson makes much of Hedlund’s dialogue unintentionally hilarious.

But he’s miles ahead of Rooney Mara’s Tiger Lily who has a hard time not sounding bored, mainly because all of her dialogue is exposition – as a character she has no inner life of her own, she is entirely defined by helping Peter.

Though the film’s story technically meets the definition of ‘new’ little in it will offer up the feeling that word evokes. By the end its formulaic roots can’t be hidden anymore and Pan, for all its good intentions, breaks down into another story about a young man learning to believe in his ability to beat villains by sending a flurry of visual effects at them.

Wright and his young star give it their all, and they’re handily backed up by a number of skilled craftsmen, but best director in the world can’t make a good film of a weak script for all the plaudits Pan got in development, in execution it’s as plain Jane as they come. It’s all the more disappointing after the delightful appetizer of whimsy Wright began with that the bulk of the meal is a bland, boiled meat like substance.

It’s enough to make you seat back in your seat and tell the world ‘no, I don’t actually believe in fairies or magic after all.’

Author’s Note: Last week I wrote about one of my favorite Star Wars characters, Admiral Motti played by Richard LeParmentier. It is with disappointment and sadness that I learned of his death this week. (04/16/13) Besides Star Wars, Richard appeared in Who Framed Roger Rabbit, the James Bond film Octopussy, and Superman II, as well […]

Terraforming Terra: The Ministry for the Future: A Novel by Kim Stanley