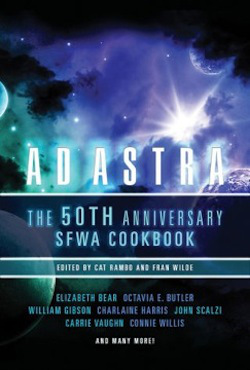 Ad Astra, The SFWA 50th Anniversary Cookbook, has been released as part of the Science Fiction/Fantasy Writers of America’s fiftieth anniversary celebration!

Yes, the organization founded by Damon Knight (almost as a challenge) has turned fifty this year.  And what better way to celebrate than to cook up some decidedly Ess Eff recipes?

Edited by SFWA President Cat Rambo, the book contains such esoteric fare as BBQ Elf and Momos, not to mention badger illustrations by MCA Hogarth and Ursula Vernon.

Read more about it at TOR!