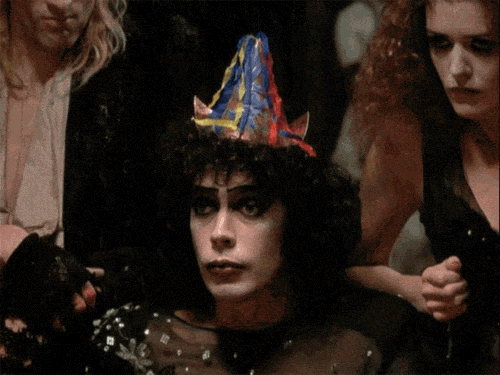 I’m an old hand at RHPS, having watched it for the first time in 1978 during a showing at Rutgers University;  shortly thereafter I was a regular attendee at the midnight showing in Hackensack NJ and hosting Rocky themed parties, complete with what we now call Cosplay.  (I did Frank-N-Furter, the girlfriend did Magenta;  pictures exist but will not be published here, though I have been told I looked pretty good in fishnets….)

The Rocky Horror Picture Show, in case you have somehow missed the world’s first and probably foremost cult film, began as a musical (The Rocky Horror Show) written by Richard O’Brien and performed in London.  Shortly thereafter, O’Brien and Jim Sharman turned it into a film for Fox, starring Tim Curry, Susan Sarandon and Barry Bostwick.

The story is both homage to late night SF and horror B-fare, passion play and an appeal for the other’s acceptance by society – or rather, giving society the boot and being who you are regardless of acceptance. One of the signature songs has the line “Don’t dream it, BE it” in its chorus. (As the film itself has proven, damning the torpedoes and letting it all hang out with pride and confidence is the path to acceptance.)

When the film version tanked in original release, it was offered as midnight fare by a couple of theaters (NYC, Austin TX) and quickly became a cult hit.  RHPS has been running as a midnight phenom in theaters across the country ever since.

One of the unique aspects of the film is its audience participation.  This began as callbacks from the audience during various scenes (for example, whenever Bostwick’s character – Brad – appears on screen, everyone yells “Asshole!”.  Later, when Brad and Janet (Brad’s fiance) – Susan Sarandon – are shown to their guest rooms, Janet’s is decorated in pink and the audience yells “Pink is for girls” and when Brad enters his, decorated in blue, the audience yells “and blue is for ASSHOLES!”.  Perhaps the most recognizable callback takes place during Tim Curry’s first appearance during the musical number Sweet Transvestite.  One of the final lines of the song has Curry singing “I see you shiver with antici…” and during the pause the audience yells “Say it!!!”, after which Curry completes the line with “pation.”)

Callbacks led to more;  toast, hotdogs, playing cards being thrown at the screen in response to various bits of dialogue, which eventually led to shadow plays – costumed members of the audience performing the movie in front of the screen.

Audience participation has gotten so extensive that numerous scripts have been published.  I’ve looked at a few recently and have discovered that there have been vast changes since my days in Hackensack;  during the performance of the song Over at the Frankenstein Place, the line in the chorus “there’s a light…” was accompanied by everyone holding up their lighters and flicking them on.  These days, only flashlights or LEDs are allowed (not nearly the same!).  The callbacks have changed dramatically as well.  I’m pretty sure that it was my pals and I that started the callback line “he’s got no neck!” (in response to Charles Gray as the Criminologist) which today shows up in various scripts in altered form (longer, more involved and, in my opinion, not nearly as funny as the original.  But this is of course something you have to see in person to gain the full effect).

RHPS is well connected to the SF community;  its themes echo those of fandom – acceptance despite otherness – and its opening song – Science Fiction Double Feature – could almost be the anthem for science fiction.  The film was displayed at the 1976 Worldcon (which is believed to have given it a major boost in exposure).

Today (as on nearly every significant anniversary) someone has announced plans to remake Rocky for television (we’ll see, though I believe its doomed to failure as RHPS is really one of those unique properties.  A sequel – Shock Treatment – came and went and has virtually no following at all.)  There are regular Rocky conventions; a few years back a stage revival was very successful in New York and a newly remastered version of the soundtrack has been released.

Today is Friday, the perfect day for the 40th anniversary;  theaters across the country will probably be turning people away in droves at midnight.  Boston (closest to me) has a showing, but I’ll have to be content with re-watching my 25th anniversary DVD.  Which is nowhere near to satisfying as The Rocky Horror Picture Show really needs to be seen with an audience (if you plan on going for the first time, be prepared to be called a “Virgin” the entire evening.)

For more Rocky goodness, check out this coverage:

NHPR’s retrospective.  Note.  during the discussion of the film, the interviewee refers to Frank-N-Furter (and the other Transylvanians) as “cannibals”.  (There’s a scene where one of Frank’s previous lovers has been prepared for consumption).  Technically, Frank, Riff-Raff and Magenta are aliens from another planet, so eating people is not cannibalism.  Other than that though, the piece is a pretty good discussion of the film and its cult status.

The BBC on RHPS

CNN Reports on the possible remake.  This piece has a nice “then and now” photo feature on the actors.

New version of the album.

And no SF oriented website would be doing justice by RHPS if it didn’t provide the lyrics for Science Fiction Double Feature:

I knew Leo G. Carroll
Was over a barrel
When Tarantula took to the hills
And I really got hot
When I saw Janette Scott
Fight a Triffid that spits poison and kills
Dana Andrews said prunes
Gave him the runes
And passing them used lots of skills
But When Worlds Collide
Said George Pal to his bride
I’m gonna give you some terrible thrills

*We always sat in the back row.  The convention back then was for us to stand and take a bow.  That was nice, but sitting back there also meant we never got rained on….

In this week’s viewing: Appare-Ranman! and Deca-Dence telegraph plot points rather badly, and more!

Even Scarlett Johansson parading naked across the screen can not save Under the Skin.

Is It Hindsight or Prediction When They Got It Right But No One Listened?