Entropy happens whether we want it to or not. Why are we so fascinated with helping it along?

When we were kids we used to like to build things.

Sand castles. Playing card towers. Lego vehicles. Even just piling random objects into a makeshift tower was fun and could consume our attention for hours,

But, inevitably, some other kid would come along. Maybe it’s a kid who is not as creative or one who has trouble mustering enough concentration to build something fine for himself. What happens? In one swift, devastating second all that you have painstakingly built comes crashing down in a fury of wanton destruction.

Maybe that kid is you. Sometimes we build something just for the sheer pleasure of seeing it all come down.

It’s the way of the world, sure. Entropy happens. In fact, according to the entropic principal it is the way of the universe. States of order will inevitably become chaotic and disordered. It will happen no matter what. But sometimes we seem to like to help it along.

And, it seems, we like to watch it happen. Furthermore, we will voluntarily pay good money to sit and watch the chaos and destruction play out in front of us, all while wearing special glasses to help make it all seem even more real. 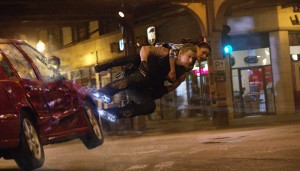 I began thinking about this while watching the recent 3D science fiction opus, JUPITER ASCENDING. The film is the latest offering from Andy and Lana Wachowski, the filmmakers behind THE MATRIX Trilogy. In this film a lot of stuff gets broken. Early on in the film aliens break Chicago.

Well, they’re not trying to, They’re trying to kill Mila Kunis who is being flown around by Channing Tatum in his magic gravity boots.

Okay. It’s a long story. It all makes sense (kind of) when you watch it. The point is, overexcited aliens blast away trying to kill one little girl and her beefy protector and end up managing to hit most of the structures in downtown Chicago with their flying ships’ weapons.

All I could think about while that scene was playing out was; Why do we always have to break everything? 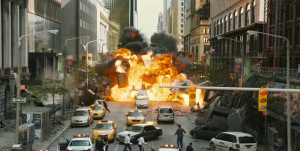 It reminded me of other recent films where cities fall victim to alien attacks. In Zack Snyder’s MAN OF STEEL Superman and his Kryptonian enemies manage to level most of Metropolis in an orgy of urban deconstruction. That scene made me cringe. Superman is supposed to be the hero, yet there he was, inadvertently knocking over high rises that take years of careful planning and painstaking construction to erect. Same with THE AVENGERS, although it wasn’t quite as bad. Six superheroes, including the Hulk, managed to fight off an invasion of giant alien creatures and at least try to mitigate some of the damage. But then there was SKYFALL, where Daniel Craig’s James Bond broke everything he got his hands on. Never lend James Bond any of your stuff because he will break it!

It never seems to occur to these heroes that maybe fighting it out in the middle of a crowded city is a really bad idea. They don’t even try to lead the invaders into the less populated areas.

Entropy happens. Entropy will happen. There’s nothing we can do about that. So why do we insist on helping it along? The sand castles have to come down. Our desire to see things fall apart, to see the process of entropy speeded up, overwhelms us.

I guess audiences go to movies like that to feel like a kid again. And it works. There you are, kid. Here’s a nice shiny CGI city that we made for you. Isn’t it nice?

Sit back. Eat your popcorn and your candy. Drink your soda. Watch us while we knock it all down. It’ll be fun.

Next week I’ll write more about art. In the meantime I have to go carefully and painstakingly build some.

Howdy friends and neighbors. How’s it going? Been kinda wrapped up with writing projects to post much here. But also since this is a blog that comments on subjects far and wide, it’s been hard to find something to comment on that wasn’t depressing. The news has been filled with stories of bombings, mass shootings, […]