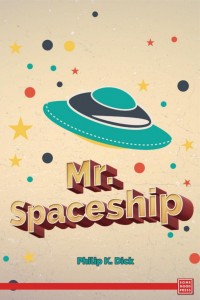 When one thinks of artificial intelligence, the common perspective is that of a computer with ever evolving abilities and the ultimate goal of self-awareness. As fans of science fiction, we’ve witnessed these traits in classic works like 2001: A Space Odyssey, Terminator and Star Trek. But in Philip K. Dick’s short story Mr. Spaceship, the idea of a thinking machine takes a unique twist.

Mr. Spaceship first appeared in the January 1953 edition of Imagination – Stories of Science and Fantasy. Published by Greenleaf Publishing Company and edited by owner William L. Hamling (who provided an essay titled The Observatory for the December 1950 issue of Amazing Stories), Imagination was known more for its pulp entertainment value than the thought provoking works of fiction that fandom has sought over time. Fortunately, Dick and a few other renowned writers occasionally provided stories that broke the magazine’s mold.

The story begins with struggling scientist Philip Kramer trying to bring his ideas of mind controlled interstellar ships to fruition. In the distant future, the human race has been in an ongoing battle with an alien race known as the Yuks. But man’s limited technology is no match against the organic ships of the Yuks, and an end to the conflict is nowhere in sight. Kramer’s fantastic idea of being able to control a ship by manipulating the quick reactions of a human brain linked to a ship’s computer could put the humans on a level playing field and the possibility of ending the war.

Kramer’s old college professor Michael Thomas is aged and dying, a perfect selection as the first brain contributor to the project. But it is discovered during the first test flight that the professor had made a few modifications to the ships data system prior to the death of his body, enabling the dead man’s brain to cut the link from mission control and take independent full control over the vessel.

Professor Thomas believed that the endless battle stemmed from an ingrained habit of war forged over thousands of years of violence, and the only way the human race can survive is to start over. So the ship controlled by Thomas’ brain kidnaps Philip Kramer and his recently separated wife Dolores with plans of starting over – colonizing a distant world. A harsh decision the estranged couple are left contemplating as the story ends.

The theory is interesting, but is the act of connecting man and machine actually a crude attempt at immortality? Perhaps this is man’s ultimate act of blaspheme, taking one‘s soul out of the hands of god and leaving fate to pulses of wires and silicone. Are these moral questions, or just necessary measures taken to sustain the survival of man?

Mr. Spaceship leaves the reader with more questions than answers. The often frowned upon belief that creating a machine with self-awareness can only led to hardship (as Skynet does in Terminator or Hal in 2001: A Space Odyssey) is tame compared to the possibilities of the human mind imbedded in a machine. At first I questioned the difference between a human piloting the ship as opposed to the direct connection of the mind, but Dick shows how instantaneous actions are more effective than the slower reaction time of man alone. Even a robotic pilot or crew member (like Lieutenant Data from the Star Trek universe) would have a delay based on reaction time. The physical requirement to press a button is still a measurable unit of time compared to direct control. The ability to connect and communicate directly with other machines gives the ship a much broader source of control. The human body cannot compete.

This unique twist on the idea of a thinking machine gives readers plenty to think about, even after the last page is turned. Given that this short story first appeared in the aptly named publication Imagination – Stories of Science and Fantasy, the finely woven elements of fact and fiction provide a dark background for a deeper, morally questionable dilemma.

Mr. Spaceship by Philip K. Dick is not a right protected work of literature, so it can be found in text format via numerous locations across the interweb. Check it out. As computers continue to get smarter and smarter thanks to the ingenuity of man, perhaps the next step will include the integration of man.