A recap from Amazing’s Mistress of Poetry

As many and most people are doing around this time of year, I too have been thinking about 2014 and how it went. For the most part it was an amazing year. There was some loss and painful things, but when I think about it, it was pretty great. And Amazing Stories and speculative poetry was a big part of that. So this is my 2014 in review as pertains to poetry and my part in it:

I published a total of 26 posts on Amazing Stories. All but 2 of them were focused on speculative poetry or poets. There were 7 spec-poetry Roundups, where I cruise the net and showcase several places where you can find great poetry and do a bit of reviewing of the poetry there. I published one 2-part Interview with Elizabeth Barrette, crowd-funding poetess extraordinaire. I reviewed 2 magazines (Mythic Delirium’s final print magazine and Liminality’s debut webzine issue). 10 collections of poetry by a single author, 2 anthologies (Where Rockets Burn Through and Cinderella Jump Rope Rhymes) and one post showcasing the nominees for the 2014 Elgin Award.

It was interesting that my interview from October 2013 with Amal El-Mohtar made it into Amazing Stories’ editor/publisher Steve Davidson’s year-end post of the most popular posts of the year. I’m sure this says more about Amal than it does about me. She’s an amazing poet, author and editor.

It was gratifying to see all but one or two of my regular posts make it into the TIME MACHINE list of the site’s 50 most popular posts for the week they first appeared, sometimes two – in the top 10 usually! The most popular posts in general, based on their appearance in the TIME MACHINE (consistently around 5th or 6th on the list) and on the numbers of shares of the posts were the Roundups. I can see why, there are always several poets and magazines, which I mention in any given Roundup, so the pool of directly, invested readers and sharers is much larger. That said, the reviews have also made it into the TIME MACHINE posts, usually found mid-list, which speaks to the community’s supportive nature.

Perhaps a somewhat unusual feature of my reviews on Amazing Stories is the audio. I choose 3 or 4 (sometimes more) poems from each collection and record them for your listening enjoyment. I recorded 73 poems in 2014! Actually, I don’t do this only for you – but rather, it helps me really delve into the poetry. I like to understand the collection as much as I can before reviewing it and the act of choosing poetry to record and then doing so helps me in a way silent reading doesn’t. Poet Robert Payne Cabeen (whose collection Fearworms I reviewed a couple months back) wrote, “I want you to own the poems….mak(e) them your own by reading them aloud. Set them free from the prison of the page. Give them life in the world of the senses.” That is how I came to poetry (by singing poetry set to music) and that’s how I enjoy it most. I hope you have too. 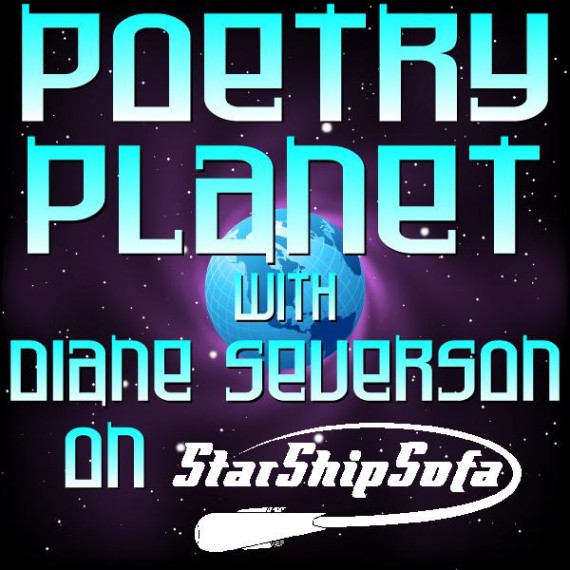 Outside of Amazing Stories I continue to produce Poetry Planet – my podcast segment for StarShipSofa.com – albeit very sporadically. This year, despite my best intentions, I only did three of them, but they were full of award-winning poetry. Literally. I did a podcast showcasing the SFPA’s Poetry Contest from 2013, the Dwarf Stars Award and the Full-length collection category of the Elgin Award.

I have 25 collections in my queue at the moment. I’m sure more will be added! I’ll only manage to review that many if I publish more often. I may just. About mid-way through 2014 I decided my posts were way too long and I was pleased with how easy it was to pare them down. Mostly, I did so just by not doing more than one collection (regardless of how short) per post. Otherwise, I just got carried away, I think!

I have had a themed Poetry Planet in the works for nearly 2 years, which always got bumped back for the more time-sensitive award showcases. That’s going to change! I have one more Elgin Award to finish producing, and then I’m going let Poetry Planet – Animals & Creatures take precedence. The Rhysling Award and the Poetry Contest 2014 will also get shows and then as a book-end piece I’ll do Robots & Androids. Who knows maybe I’ll manage Future Humans as well!

Lofty plans – we’ll see how much I can realize! Will you join me?

Can you hear me, Major Tom?

Rockets and Missiles: Past and Future by Martin Caidin is literally a blast from the past. It is a delightfully historical account of man’s progression into space – because rockets are cool.