Not only does SF Poetry exist as a full-fledged entity, but there are also people who identify as SF Poets. AND they have their own little association too.

It wasn’t so long ago that I discovered the existence of Science Fiction Poetry. I’d only done three story narrations for my favorite podcast StarShipSofa when the host, Tony, sent me some poetry by Laurel Winter to record, which aired on Aural Delights No. 26. I was instantly captivated. You can read more about that in my very first post for Amazing Stories “Science Fiction Poetry”. At any rate, since that moment, I’ve had the pleasure of introducing many people to SF Poetry, who probably, like me, had had up till then no inkling that it was even a thing. However, it wasn’t until after the birth of my son, and my hiatus from narrating, when I decided to create a segment for StarShipSofa showcasing SF Poetry (“Poetry Planet”), that I discovered there’s a whole community of SF Poets. They are not writing into the ether. Not only does SF Poetry exist as a full-fledged entity, but there are also people who identify as SF Poets. AND they have their own little association too. Now, when I discovered this, I joined the Science Fiction Poetry Association immediately because there didn’t seem to be any credentials necessary. I wanted to learn everything I could about the genre and this centralized place seemed like the best place to start.

I’ve met several poets along the way who didn’t realize that there was any sort of collective or that SF Poets were so supportive of one another. One such poet is Robert Payne Cabeen. He approached me when he heard Poetry Planet and as a result discovered that SF Poetry was a thing. He asked me to listen to two of his poems that ran on the Tales to Terrify podcast “Dr. Volmer” and “Clowns”. He had been writing Horror poetry in the vacuum for quite some time when he discovered the podcast hosted by Larry Santoro. We got to corresponding, and Larry and I introduced him to other SF poets and markets and organizations. I encouraged Bob to submit something for Poetry Planet and as a result he finished an android poem he’d been working but had put aside. “Rule 44” the result. So, in a way, I feel a certain responsibility that we can hold a book full of these poems and others in our hands today. That book is Fearworms. 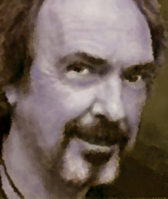 Some official stuff about Cabeen: “Robert Payne Cabeen is a screenwriter, artist, and purveyor of narrative horror poetry. His screenwriting credits include Heavy Metal 2000, for Columbia TriStar, Sony Pictures, A Monkey’s Tale, and Walking with Buddha.

Cabeen received a Master of Fine Arts degree from Otis Art Institute, with a dual major in painting and design. Since then, he has combined his interests in the visual arts with screenwriting and story editing for a broad range of entertainment companies including Warner Brothers, Columbia/TriStar, Disney, Sony, Nelvana, and Universal.”

Fearworms contains 12 mostly long poems, all of them narrative in nature and the book comes in at just under 100 pages including all the stuff besides poetry. The poems rhyme and are composed in metered verse. I’ve characterized these poems as “deliciously creepy” and they are. Cabeen writes the sort of horror that fascinates rather than repells. I believe others have said that if you generally don’t like poetry, you may find yourself changing your mind while reading this book. The rhyming verse draws you in making you feel comfortable, even safe because of it and then he whammies you with some truly horrific images to go along with it. Many of his poems tell a disturbing story, full of action and mayhem. “Clowns”, “Dr. Volmer”, and “Krampus Comes to Town” are excellent examples. By following the link you can listen to them and others as narrated by the most perfect voice for these, Robert Neufeld. Cabeen tells me an audio book is also in the works. The two of us talked extensively on the aural nature of poetry, and I think his poetry lends itself perfectly to reading aloud. I’m particularly fond of the android poem “Rule 44”, it being Science Fiction and all and also that I inspired Bob to finish it. It is certainly the most poignant of the collection. A Robot on a survey mission in space longing to sing for his co-astronaut but forbidden to do so:

They let us have emotions, too—

From joy to deep despair.

We’d give them love and care.

But soon, they sensed they’d gone too far

And did a heartless thing.

And now, I cannot sing. 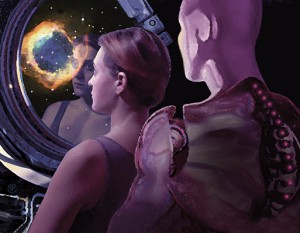 Rule 44 is slated to be part of a Poetry Planet edition on “Robots & Androids”. But don’t hold your breath – it might take a while for it to come out.

Bob asked me to record two poems for this review: “Where Are You Now?” and “Whitestone Grove Hotel”. I enjoyed doing them both, but what Robert Neufeld seems to do so beautifully and effortlessly, I found difficult. The regular rhyme and meter of these verses, with repetitions as well, makes it so so difficult not to end up lilting every line. There’s the risk they might sound trite. That said, I think that they are written in tradition meter with rhyme is what makes them so insidious. You are lulled into a sense of security until the first gruesome thing happens.

“Where Are You Now?” is a list poem. Everything has its place in the world, but the subject of the poem is nowhere to be found:

“Whitestone Grove Hotel” is definitely not a place for the living and yet we are alive when we do so. The horror mounts as we are introduced to the Hotel’s “amenities” little by little: 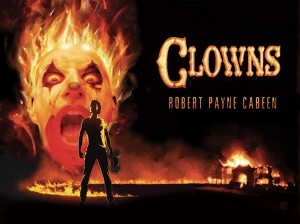 The pages of Fearworms – Selected Poems are adorned most lavishly with graphics and artwork by Cabeen himself, who is, as it says in his bio above (just in case you missed it), a trained artist. I suspect due to his work in the movie industry his artwork is evocative of cinema posters. His poems are epic and tell an in-depth story and the artwork reflects that. They are vivid and grotesque and multi-layered.

Fearworms – Selected Poems is scheduled for release on 15 December 2014. To find out how to pre-order a signed copy, visit fearworms.com. You can also get updates from the Fearworms Facebook Page or Twitter (@fearworms).

Our Chinese bloggers looks at Clarkesworld’s Chinese in translation project with this take on Xia Jia’s story.

Women’s Weird: Strange Stories by Women, 1890-1940, edited by Melissa Edmundson is yet another fine example of publications bringing back important, influential work.

One of the planets around TRAPPIST-1 may have an ocean