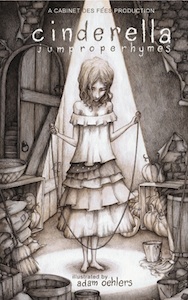 This week I’d like to introduce you to a beautiful and fun little volume called Cinderella Jump Rope Rhymes brought to you by Cabinet des Fées. You know, I do a lot of stumbling around on the web and find the darndest things! Then I promptly forget how I got there. This is one of those things, although the path may not be so convoluted, because I have known about Cabinet des Fées and Papaveria Press for a long time. What I didn’t know about was this existence of this book of poetry.

With poetry contributions by Francesca Forrest, Sonya Taaffe, Samantha Henderson, Erik Amundsen, Rose Lemberg, Nadia Bulkin, Julia Rios, and Kyle Davis what could be better? The inclusion of artwork by Adam Oehlers that’s what! Just have a look at that cover and the other artwork on this page.

If you grew up in the USA and jumped rope at least into the 1980’s you may be familiar with the Cinderella Jump Rope Rhyme in its original form. The most popular version is:

Went downstairs to kiss her fella

By mistake she kissed a snake

How many doctors did it take?

You start jumping and count until you miss.

Now jump to 2012 when Erik Amundsen put it out to the universe to create new verses of the rhyme. What is collected in this chapbook are the bizarre imaginings of these wonderful poets. Cinderella isn’t condemned to wearing only yellow and she gets into some pretty serious stuff. I’ve recorded a brief selection for your listening pleasure:

The illustrations by Adam Oehlers create at least half of the charm of this book. Basically black and white, they depict Cinderella in many guises based directly on the Jump Rope Rhymes. He says in the interview that he imagined there are many Cinderella’s all inhabiting the same world (cloned? Or just all girls with the same name?) His artwork combines the fairy-tale nature with the often macabre tone of the rhymes. The artist was interviewed by the editor Francesca Forrest and there’s a lot more depth to discover there. You can also see a few more examples of the book’s illustrations.

If you are looking for something to contribute to, to give back to the “community” (in the broader sense) in this festive season you will be happy to know that 50% of the proceeds from the sale of this book go directly to animal charities. The producer, Cabinet des Fées, says:

“In tribute to all of the animal friends and helpers without whom our fairy tale heroines and heros would themselves be lost, CdF has decided to fund animal charities with this publication. Fifty percent of all profits will be donated each quarter, beginning with the quarter ending June 30, 2012. The remaining profits will go toward the maintenance of this website, and to fund Scheherezade’s Bequest planned print volume.”

Cabinet des Fées is a global journal, which produces a micro web cum print Zine called Sheherezade’s Bequest (edited by Donna Quattrone and Virginia M. Mohlere) and the webzine Demeter’s Spicebox (edited by Nin Harris) and focuses on Fairy Tale fiction and non-fiction. 50% of all their proceeds go to various charities. Cabinet des Fées publications are published by Papaveria Press, a micro-press founded in 2001 which produces gorgeous hand-made poetry volumes (among them Speaking in Pearls by Jane Yolen and the award-winning but sadly sold out limited edition of Amal El-Mohtar’s The Honey Month (happily available as a paperback, but without the honey sample!)

Cinderella Jump Rope Rhymes can be purchased at The Book Depository, Amazon.com, Amazon.co.uk, as well as at other online sellers. Digital editions from the publisher’s website, and from Amazon.

I hope that’s enough to keep you busy stumbling around the ‘net for a week or so!