Dietrich’s first book is the short novel The Seals of Abgal. It’s a combination of Sumerian and Norse mythology. Now that’s not a combination you see everyday. 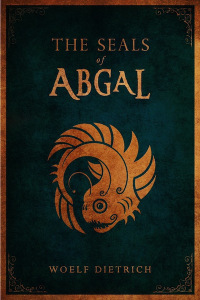 The Seals of Abgal
Woelf Dietrich
print $7.99
ebook $2.99
available through 16 vendors, including the author

One of the things I love about electronic books is that, unless a publisher puts geographic restrictions on a title, I can read books written by people from all over the world. These are often books I would never be able to read otherwise, and as a result I get to enjoy the work of new authors with unique voices.

Take, for example, Woelf Dietrich. He lives in New Zealand. Do you have any idea what shipping to the US costs for books from that part of the world? Hint: it’s often more than the book itself.

But an ebook, that’s another thing entirely. Dietrich’s first book is the short novel The Seals of Abgal. It’s a combination of Sumerian and Norse mythology. Now that’s not a combination you see everyday. Like I said, unique voices.

Sebastian Kaine is a rare book dealer in New York. His uncle is a very wealthy rare book dealer, and after his father’s death, he’s decided to enter the family business rather than be a lawyer.

Too bad he didn’t realize that collecting and selling antiquarian books was such a hazardous occupation.

The book opens with Sebastian regaining consciousness on the basement floor of his shop. He’s in a great deal of pain. There are two men who are looking for a particular book. Mr. Noodles is the heavy. He doesn’t take kindly to people making fun of his name.

The really scary guy calls himself Seir. He smells like something dead. Seir is looking for a book called The Seals of Abgal. It was, he claims, never meant to fall into human hands. Containing seals which can be used to summon the gods of the Sumerian pantheon, it’s been lost for millennia. Seir thinks it’s been found and is in Sebastian’s possession.  He wants it, wants it very badly.

Sebastian insists he’s never heard of the tome, but it’s clear from the way he’s responding to Seir’s threats that there’s more going on that Sebastian is revealing.  Just exactly what those things are, Dietrich reveals little by little, kind of like a flower unfolding its petals.  The alert reader will pick up on some of the clues, but there are still enough twists that even a jaded reader should experience a surprise or two.

There are a great number of fantasy novels on the market these days that have a good, even compelling story, but they suffer from pedestrian prose. Not so The Seals of Abgal. Not only does Dietrich tells a suspenseful story that’s different from most urban fantasy, he’s an accomplished stylist. His prose flows smoothly, carrying the reader along.

Oh, and the Norse connection? That’s far enough along in the book that you’ll need to read it for yourself. I’m not providing any spoilers.

I read an electronic version of The Seals of Abgal on the Kindle app on my phone. It worked flawlessly, without any problems. All the line breaks occurred where they were supposed to. The cover art fits the story well.

The Seals of Abgal is the first in a new series. I’m looking forward to further installments. If you’re a fan of urban fantasy and are looking for something a little different, then this is one you’ll want to check out.

Amazon Wants to Mine Data From the (Literal) Stars