It’s almost Christmas, so what better way to enjoy the holidays than sitting by the fire and checking out Adam Roberts book I Am Scrooge: A Zombie Story for Christmas. 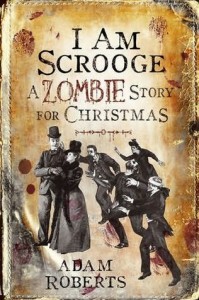 I Am Scrooge: A Zombie Story for Christmas is a cute little tale by established British author and critic Adam Roberts. Having written several parodies in the past, tackling this Christmas standard using his unique twist on humorous horror was bound to raise a few literary eyebrows – as well as a few dead and not so dead characters.

The book was first printed in 2009 by Gollancz, the science fiction / fantasy imprint of Orion Publishing Group. The copy reviewed here is a 2012 print from Gollancz. At only 153 pages, it is a quick read.

Though this story is a direct reference to the Charles Dickens classic A Christmas Carol, Roberts also gives a nod to the 1954 story I am Legend by the iconic writer Richard Matheson. This gesture is not just evident in the title. Scrooge’s belief that he is “the last human being alive” resembles the same sentiment of Matheson’s lead character Robert Neville.

Roberts’ unique vision of mixing a ghost story with zombies includes a bit of irony as both elements could be considered members of the “walking dead.” But one does hold a significant advantage over the other as pointed out by the Ghost of Christmas Present.

“Understand this about Zombies. They feed upon mind. They devour mentation itself. If they come upon you then they will break open your skull and slurp up you brains. With me, should they chance upon me, and because I am wholly ideational, they would devour me entire.”

And here lies the problem with the story. The vulnerability of the ghosts is an acceptable conflict, but the often over used premise of zombies hunting brains inevitably impedes the believability of the plot. Yes there are many elements of humor throughout the book, some of which is over the top and a bit distracting, but the demand for “braaaiiins” takes it to an extreme level of silliness that the rest of the story struggles to overcome. 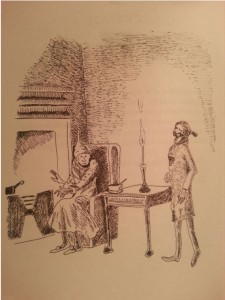 The illustrations in the book are credited to Zom Leech. There aren’t that many sketches, but the few that are included are fun black and white representations of the events of the text. The one noticeable downfall in regards to the illustrations is the lack of images of the story’s main character. One sketch leading into the first chapter could be an image of Scrooge, a man in a night cap sitting near a fireplace as a zombie approaches, but it is not defined and no other pictures of him are evident. Scrooge’s lack of representation in the artwork is strange and a little disappointing.

As far as horror stories go, I Am Scrooge: A Zombie Story for Christmas by Adam Roberts is just a cute little read for fans of the genre looking for something during the holidays. It’s not too gory for the joyful season, yet it yields just enough loyalty to the original Dickens plotline to keep the characters true. It does cross the line trying to be funny at times, but for somebody looking for a twist on a seasonal classic, it just might do the trick.