The subject of Armageddon has been and always will be a popular theme in science fiction. I’m not sure if this is due to the wide range of plausible causes of destruction or simply a sign of doubt by society regarding the stability of mankind. In either case, many readers tend to gravitate toward these type of stories, so it only makes sense that a lot of new writers have tried to break into the field by joining the subject’s popularity. This is either good for the genre or a sign that we are all doomed.

Unfortunately, not every writer has mastered this genre, leaving a big gap between the short list of good stories and the longer list of, well…stories that aren’t so good. I mention the specific subject matter of Armageddon because it is the basis of the story titled ‘If I Forget Thee, Oh Earth…’, which is a wonderful example of “how to” when it comes to writing good science fiction. This is why I like this story and this is why I decided to post something that young and upcoming writers might find helpful. 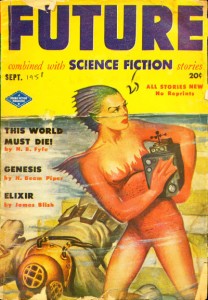 Written by the iconic Arthur C. Clarke and first appearing in the September 1951 issue of Future Combined with Science Fiction Stories, the edition of the story reviewed here comes from the 1978 Puffin Publishing anthology “The Worlds of Arthur C. Clarke – Of Time and Stars.”

‘If I Forget Thee, Oh Earth…’ is story about the aftermath of doomsday. But it is also a lesson in some of the literary techniques that have become the backbone of successful writers. If creative writing instructors do not have this story in their study guide, they should seriously consider adding it because it covers many of the basics.

The story is centered around a ten year old boy named Martin who lives in a colony on the Moon. When his father takes him on a spiritual journey across the lunar surface to view the remnants of a war torn and uninhabitable Earth in the sky, the boy reflect on his lack of knowledge about the planet and yearns to experience the same life his ancestors did so long ago.

As a learning tool, the story has many of the basic elements of writing. I’m not just talking about the “show, don’t tell” aspect we’ve are all had pounded into our brains over the years. I’m talking about the attention to details. When young Martin looks into the lunar sky and sees “unscintillating points,” he remembers a rhyme from one of his father’s books.

How I wonder what you are.

Well, he knew what the stars were. Whoever asked that question must have been very stupid. And what did they mean by “twinkle”? You could see at a glance that all the stars shone with the same steady, unwavering light.

This short passage is filled with information about growing up on the moon. The boy’s naivety about the simplicity of a poem written for children shows the disconnect between a romantic past and a harsh future. But more importantly, the reader gets to visualize the starry non-twinkling sky from the lunar surface as opposed to view of the stars through the atmospheric contamination we  are limited to today here on Earth. For someone never having experienced the vision from the ground, twinkling stars would sound ridiculous.

Another important element many writers overlook is the use of our senses. These are important measuring sticks we can easily relate and compare to, helping the reader experience the story better. At one point, Martin mentions the smells of life “everywhere” within the colonial dome, but in the cabin of the lunar vehicle, Martin touches on some other senses.

The only sound was the faint whisper of the oxygen feed and an occasional metallic crepitation as the walls of the vehicle radiated away their heat.

Here, the reader can imagine the near silence, the life support system keeping them alive and the harsh reality of what lies just inches away in the vacuum of space outside the vehicle. This is a recurring feeling of isolation Clarke successfully instills throughout the story.

Eventually, Martin realizes his father brought him on this pilgrimage to understand what humanity has lost and hopefully someday will be able to regain. The title ‘If I Forget Thee, Oh Earth…’ is a direct biblical reference to “if I forget thee, O Jerusalem” and the Babylonian destruction of Jerusalem. And like the religious teachings that have been extended down through the generations, Martin too will bring his own children on this journey as will their children, to teach them about exile. Again, we are shown the tension of isolation.

For a tale with less than 1800 words, Arthur C. Clarke has put together a powerful tool for educating new writers on the basics of good storytelling. Take a moment and read it if you get a chance. The story can be found in many locations across the interweb. But don’t just look at it as a good story full of moral undertones with an Armageddon theme just to make it exciting. Anybody can do that. Look deeper and appreciate the art of writing. You might be surprised what you’ll find.

The First Rule of Time Travel