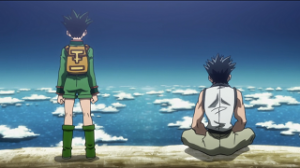 Hunter x Hunter finale – As the title of the episode says, this isn’t a recap, but more of an assessment of where things stand and where they might go next. Ging opening up to Gon about his motivations leads to the revelation that this is not merely an alternate Earth, but a world sitting in the midst of a cosmos with dramatically different rules. And it’s there that the manga is aiming next– if it can make it. Right now it’s on an extended break once again.

This is an excellent ending, leaving room for the show to continue if it has the opportunity but still providing a feeling of conclusion. If this is the last TV has seen of Ging and Gon, then it’s a good enough place to rest. Still, I hope we get more.

How do you summarize a show 148 episodes long? It’s long enough to have bad stretches (seriously, you can skip the Chimera Ant arc) but also to have enough good material to outweigh it. I recommend it to anyone who loves a good adventure, and would tell the new viewer to start right at the beginning, when a fresh-faced Gon is stepping away from the world he’s always known to a much wider one, ready to take anything it throws at him. Which is ironically right where it’s ended up again. 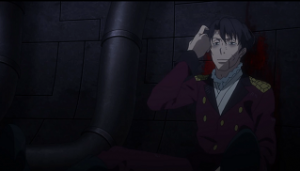 Aldnoah Zero semi-finale – Whaddaya know, the assassination finally happened after all. And that’s the only closure we’re going to get for this half of the show. Inaho might be dead, or he might have cleverly stashed a pack of fake blood in his suit for just such an eventuality. Saazbaum might be dying, or he might pull through and become Mars’s answer to Adolf Hitler next season. Just about everyone else might have died in the uncontrolled plunge down from orbit, or any one of them might turn out to be really popular with the fanbase and have a miraculous survival written in. And Slaine, why the heck did Slaine shoot Inaho? Because Inaho inexplicably turned on him after they worked together before? Or just because the plot needs a new unquestioning tool?

Aldnoah Zero hits halftime as an incredibly frustrating show. The most frustrating part is it didn’t have to be bad. It had a great setup. It had interesting characters to work with. It didn’t have to flub the backstory reveal. It didn’t have to turn Inaho into an annoying twerp. It’s fine having a teenage draftee who can paraphrase Clausewitz, for example, but having him ask a rhetorical question just so Asseylum can get it wrong and he can slap her down, then pull out the Clausewitz, turns him from a helpful genius into that insecure person who’s more about putting people down. Which hardly jibes with the values he espouses in the previous episode. It’s just bad writing. 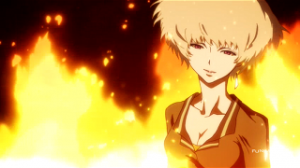 Terror in Resonance #10 – Five has found her way out at last, and can die content, knowing that Nine is alive and free, and blissfully unaware that freeing Nine has inadvertently doomed Tokyo to atomic horror. Not that she would care, for all that she’s spent her life as a virtual slave with a limited life expectancy.

Lisa is doing somewhat better with her love interest, finding her assertiveness and snapping Twelve out of his funk. And she even gets a date at Faux Tokyo Disneyland out of it. (The specific place where they sit on the bench isn’t an exact match to any part of Tokyo Disneyland, but there are elements to the architecture and the music and the stuffed character that are highly reminiscent of it. Besides, that was clearly Space Mountain at the right when Twelve pointed across the bay.)

So the gang’s back together and back in action, free of FBI-or-whoever-they-are interference, and all they need to do is disable an airborne prototype nuclear weapon on a tight time limit. Should be a piece of cake for a couple of super-geniuses, right? You know, I wouldn’t put it past this show to let them fail.

Meanwhile, Shibazaki visits the originator of the Athena Project and gets a right-wing rant. All that Mamiya says about having a loser’s attitude and needing to claim true independence is taken straight from the mouths of Japan’s conservatives. This show has now waded with full force into nearly the most contentious political territory possible. 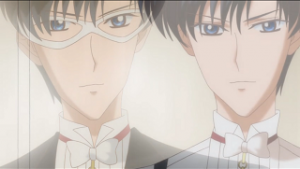 Sailor Moon Crystal #6 – All right, points for not dragging out the Mamoru/Tuxedo Mask thing any longer, because many series would have tried to drag it out a lot longer, but I have problems with its ideas of true romance. Tuxedo Mask is clearly a nice guy because he knows everything about Usagi and follows her everywhere? Please, could Usagi get a pep talk about healthy boundaries?

Whiile everything else is wrapping up, this show is still assembling the pieces. New this week are the big reveal of the main villain, a cool hideout, and what looks to be Sailor Moon’s main weapon. And there’s still one more guardian for her to find, and next week is going to be more of a proper introduction to Mamoru Chiba.

Keeping the biweekly schedule in mind, this series is really only at the midpoint of its first season. Even so, it seems like it should have gotten further than it has by now.