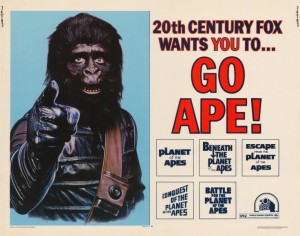 “WHERE man once stood supreme – now rule the apes!”

I remember that evocative, if oddly phrased, sentence on the back cover of a Planet of the Apes Annual in the 1970s

The release of Dawn of the Planet of the Apes is an opportunity to tell younger audiences about the days when people like me were Apes crazy. Yes, not only were there films before Star Wars, but there were even science fiction franchises before Star Wars.

I was a huge Apes fan. In fact, in 1977, when TV here in the UK began running stories about a new science fiction film that was doing astonishing business in America, I was determined to remain unimpressed. I remember telling my brother that the ape creature in this Star Wars film looked nowhere near as good as the simians in Planet of the Apes.

I was 10 years old and eventually, I succumbed to the lure of George Lucas’s film as surely as anyone else. Today, I write a blog about it. But we shouldn’t forget how important the Apes franchise was in its time – and it’s fascinating to wonder what paths SF cinema might have been taken if ape had not been supplanted by wookiee.

The first Planet of the Apes (1968), directed by Franklin J Schaffner, is rightly regarded as a genre classic. Though it can be somewhat talky, and its satire is a little heavy-handed at times, it remains a powerful film, full of memorable imagery, some chilling moments and of course the greatest ever pull-back-and-reveal ending. It has rightly been seen as reflecting the civil rights struggles of the 1960s, but I think it also says something about our resistance to evidence that challenges our world review. Dr Zaius, the orangutan who knows something about his planet’s forbidden history, reminds me of those Victorian scientists who tried desperately to reconcile the discovery of fossilized dinosaurs with their belief in the literal truth of Noah’s Ark.

The Apes films were successful enough to lead to a pretty good TV series as well as an animated show set in an alternative version of the ape-dominated future. What’s more, the films and TV series between them inspired an awful lof of merchandising – action figures, play sets, board games, comic books, everything that Star Wars would bring with it before too long. Star Wars was remarkable because so much merchandising had never before been attached to a single film; but the longevity of the Apes franchise enabled it to enter the popular culture in a very similar way. 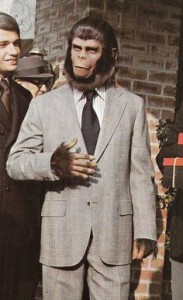 The Apes series had two qualities that were not often present in post-Star Wars SF. Firstly, it was intelligent. Yes, there were plot holes (how did those chimpanzees in Escape get the space ship out of that lake and flying again, when even Charlton Heston couldn’t?), but each sequel found a novel way to pick up the series and take it in a new direction. Secondly, was it often astonishingly downbeat. In the early films, we see the Earth devastated, then destroyed altogether, and then the sympathetic apes are gunned down in 1970s America. The bloody revolution of the apes in the fourth movie is cheery by comparison. These are films made in the days when many people believed the world was one button-push away from oblivion, and even children like me lapped up their gloomy vision of humanity’s future.

Had Apes remained the dominant SF franchise, then the genre might have looked different than it does today. It might not necessarily have been in better shape commercially, but it might have been open to a wider range of ideas.

Star Wars didn’t end the Planet of the Apes series; the cycle had already fizzled out by 1975, thanks to diminishing box office and the early cancellation of the television series, although both versions were still popular on TV. But the success of Star Wars did eclipse Apes, so that it’s easy to forget how big the franchise once was. In the memorably mangled grammar of that original tagline, where Star Wars now stands supreme, once ruled – the Apes!