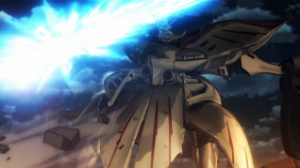 Aldnoah Zero #4 – A plasma sword seems rather wasteful, but maybe the Martian technology allows for such amazing amounts of energy that it’s easy, and hey, it provides an opportunity to destroy an attacking mecha in a completely different manner than the one in the last episode.

Now that everyone’s safe for the moment and heading out to sea, let’s take a look at some of the symbolism being invoked so far. The ship is named Wadatsumi for a sea god. Wadatsumi (or Watatsumi) can also metaphorically mean the sea itself, as in the title of the book Kike Wadatsumi no Koe (Listen to the Voices from the Sea), which happens to be about students who served in the Japanese armed forces during World War II.

There’s a mention of an Appaloosa Division, which is probably named as an allusion to the usefulness of the Appaloosa horse in helping the Nez Perce fight the US government. Throw in that the Martian royals have been established to be white, and it start to fit right in that the show chooses to show a city in the US being blown up over and over and over again. Although if you really want to show a blow being struck against the descendants of Europe, then New Orleans, with its strong traditional associations with black American culture, is not really the ideal city to pick. 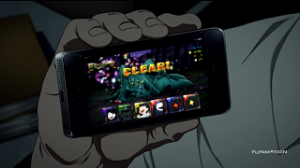 Terror in Resonance #3 – Let’s start with the obvious: that secretary’s “suicide” will turn out to be connected with whatever facillity Nine and Twelve escaped from, and Shibazaki has to be Lisa’s missing father.

Then the mysterious: I’ve never heard the story about Jocasta being descended from a dragon before. As for Arahabiaki, he’s a god who probably predates the arrival of the Yamato people (the dominant ethnic group in Japan today), but is now a major figure in the Shinto pantheon. People carry around little iron talismans of him as a charm for safety.

Meanwhile, as the police try to work out the latest riddle, Twelve promises Nine that he will minimize contact with Lisa, but a brief contact has already made major changes in her life. Having been inspired to start doing something rather than just hiding, now she’s decided to strike out from home. To her father, perhaps? 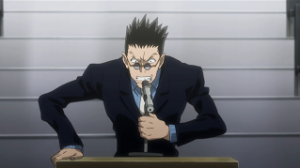 Hunter x Hunter #140 – Killua and Alluka are allowed out of the Zoldyck compound under certain rules, because there are always rules in Hunter x Hunter. Meanwhile, desperately trying to secure a valid vote, the Zodiacs have called a general meeting of the Hunters’ Association, which is almost immediately derailed by personal issues.

It’s stomping on the nostalgia pedal hard this week. First, Killua’s escort is two of his friends among the family servants, not seen since early in the series when Gon, Kurapika, and Leorio came by there to free Killua from his family’s control (or so they thought). The happy reunion is cut short, though, by the arrival of two more servants, including the one who has the audacity to address Killua as a small child rather than in the traditional form of a servant addressing her superior. And then Nanika resurfaces, reminding everyone that this is serious business.

And then we get the return of Leorio, who Gon and Killua parted ways with just about a year ago in story time, a year and a half in TV viewer time (yes, things really did slow down that much in the Chimera Ant arc). Leorio, who still has no use for coolheadedness, subtlety, or the niceties of the Hunter challenge which Ging issued to Gon way back. Who had only the barest beginnings of Nen training last time we saw him, and now is able to land a punch on one of the five most powerful Nen users in the world.

I get the feeling that Ging could have dodged, and allowed the punch to land because he does feel some guilt over not going to see Gon. Still, an impressive return for a favorite character. 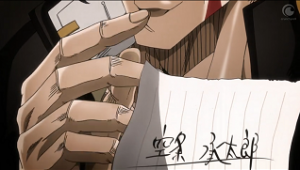 JoJo’s Bizarre Adventure: Stardust Crusaders #17 – Jōtarō may be a badass who can beat just about anyone in a fight, but he’s an orderly badass who takes careful notes about exactly how much butt to kick later. Compare that to the modern dark action hero, and JoJo feels especially ’80s this week.

Next time: camels! Probably not Egypt yet, but at least they’ve probably made it to the Arabian Peninsula.