Titan Books recently re-released the movie novelizations of all three books in the original Alien saga. If I could express my happy dance in words, I would. But I’ll have to limit my excitement to the image of a smug faced old man doing a Snoopy boogie.

At fifteen years old during the summer of 1979, I was too young to see the “R” rated film Alien on my own and my parents had no intentions of letting me go. The Ridley Scott directed story was written by Dan O’Bannon and Ronald Shusett, and the members of fandom were eagerly anticipating something special. Dejectedly, I was one of them.

Luckily, my parents paid little interest in the books I read. So when I discovered the novelization of the movie Alien was coming out from Warner Books, snatching it up was a no brainer. It was written by Alan Dean Foster, and I had already experienced his work for the first time the previous year with the Star Wars follow-up story Splinter of the Mind’s Eye. As the school year ended and the annual trip south to visit the grandparents arrived, so did the book. So while the small towns and farmlands blurred by out the window of Dad’s trusty ol’ Buick, I dove into the pages of deep space, where “no one can hear you scream.”

And here it is again. This time, the book is printed by Titan Books. But they don’t stop with the iconic installment that started it all. The novelizations of the two follow-up films were also written by Foster, so Titan has come through and provided them as well and all is good. 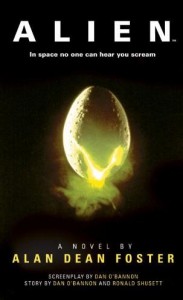 In Alien, the seven person crew of the commercial tug spacecraft Nostromo is awoken from deep sleep to investigate a distress signal from a nearby planet. After finding a downed alien spacecraft, the team investigates the scene. After Kane, one of the crewmembers, finds a nest of pod-like eggs, a creature erupts and attaches to his face.

Back aboard the Nostromo, the creature finally detaches from Kane and he seems fine. But as the crew gather for dinner, Kane suffers cramps and convulsions just before a new creature emerges out of his chest cavity. “His shirt split like the skin of a melon, peeled back on both sides as a small head the size of a man’s fist punched outward.” Some may have been impressed by the film version of this scene, but Foster’s ability to make it just as chilling (if not more so) on paper satisfied my literary taste buds and erased my fuss over not being able to see the movie.

From here on (we are about 2/3 through the book at this point), the alien creature hides aboard the ship, methodically killing off the crew one by one as he continues to grow in size. Eventually, our hero Ellen Ripley ends up being more than the beast can handle as she sends him out the airlock of an escape pod. Yea Ripley! 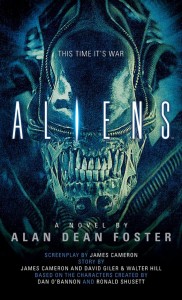 In the sequel aptly titled Aliens, Foster works this time with the story written by James Cameron (who also directed the film), David Giler and Walter Hill. Like all classic horror films, the reader is in constant conflict with the logic of some of the characters. Luckily, Foster held my hand and got me through it. A band of colonists has gone missing on planet LV-426 (the original site where the first alien had been found). Why would anyone in their right mind colonize a planet known for dangerous aliens? It’s because big corporations make it so. Once again, our hero Ripley must return to the scene and save the day. Oh, how we’ve grown to love Ripley. 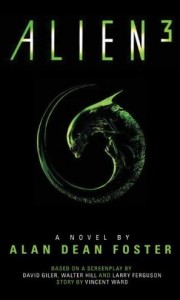 Finally came Aliens 3, which was based on the cinematic story written by Vincent Ward (the film was directed by newcomer David Fincher who went on to direct the award winning film The Social Network). By now, I was already growing tired of the films but still looked forward to the books. This time around, Ripley finds herself crashed on a prison planet. But the alien that had stowed away in her escape pod is not the only danger. A queen alien is growing inside Ripley, and she must make the ultimate sacrifice to save humanity. Poor Ripley.

Just as fans of the franchise have their favorite films and favorite moments, fans of the novelizations will have favorites also. For me, it is the very beginning of the original Alien book (as if you didn’t already know by now). The waking moments of the seven crew members as they come out of stasis defines their characters and sets the tone for all of the stories.

“You must understand that they were not professional dreamers. Professional dreamers are highly paid, respected, much sought-after talents. Like the majority of us, these seven dreamt without effort or discipline. Dreaming professionally, so that one’s dreams can be recorded and played back for the entertainment of others, is a much more demanding proposition. It requires the ability to regulate semiconscious creative impulses and to stratify imagination, an extraordinarily difficult combination to achieve.”

As each character wakes, the reader becomes instantly attached emotionally. But in a way, the passage above also reflects the art of writing a novelization of a cinematic piece originating from the minds of others. Aside from his countless other brilliant works in science fiction, readers are left without any doubt that Alan Dean Foster is the master of movie novelizations. He is a master of “dreaming professionally, so that one’s dreams can be recorded and played back for the entertainment of others.” Visually, the Alien saga is as ground breaking as it is memorable. But literally, Foster’s “creative impulses” is what makes Alien, Aliens, and Alien 3 good reading material. I may not be able to re-read these books from the back seat of Dad’s Buick, but the dreams they produce are just as fulfilling. Even 35 years later, I get to read them all over again – and again.