Frozen is coming to Once Upon a Time. Get excited. 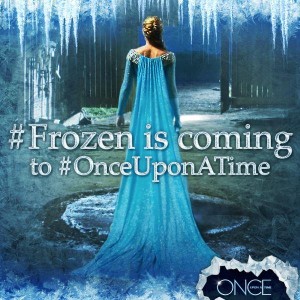 I am falling back in love with Once Upon a Time. I was getting bored with the whole Neverland storyline, but the show has grabbed my attention again. It’s all fairytale and really the kid version of myself should love this show, where as the adult me should be finding it a little cheesy. However, somehow they have managed to make a show that plays on those beloved characters from our childhood and made them grown up for us as adults.

This season we had the wicked witch from Oz and the season cliffhanger left us with a peak at Elsa from Frozen. This is really exciting as Disney is introducing one of its newest characters into the mix of fairytale classics. Now we didn’t see her from the front, so we have no idea who will actually play her in season four. In fact even the cast were unaware of this twist in the show. It would be fab if Idina Menzel (who voices the character in the film) played her in the TV show, but I doubt that will happen.

What do you think of this new twist? Are you excited for Frozen in Once Upon a Time or do you think Disney has gone too far?