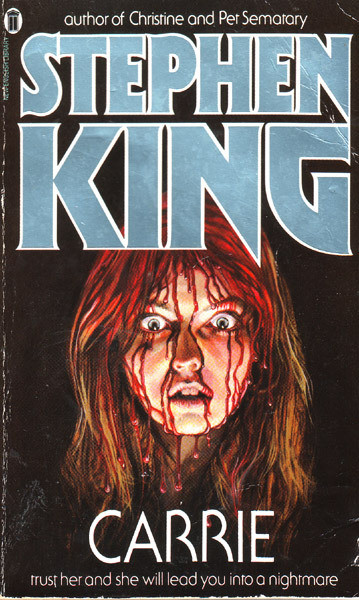 April 5 marked the 40th anniversary of the original US publication of Stephen King’s first novel, Carrie. Writing that makes me feel old. Not that I read Carrie in 1974, but I became aware of the book soon after its UK edition hit the shelves. I was 12, and not quite ready to tackle the horror within those pages. What I noticed more than Carrie was the almost completely black, and decidedly disturbing, cover for King’s second novel, ‘Salem’s Lot. One local bookshop always had a copy on display just inside the entrance and I remember being both intrigued and not quite brave enough to pick the book up.

I’m not even sure which was the first King novel I read. I think it must have been ‘Salem’s Lot – eventually. Meanwhile the film version of Carrie hit UK cinemas and was too terrified to even think about seeing it. Which I couldn’t have done even if I’d wanted to, as the BBFC (the British Board of Film Censorship, as it was then) awarded Carrie an X certificate. Which didn’t mean, as it would in the US, that it was pornographic, but that it was suitable only for audiences aged over 18.

The blood-splattered poster alone convinced me that I wasn’t suitable for Carrie. I was staying well away. Yet even without my custom the film played on and on, returning sometimes on a double-feature or cropping up on late night shows. I noticed all this because I lived a few minutes walk from a road which was home to seven cinema screens. When the films changed on a Thursday, as they did in the ’70s, I could go up into the tower – more about the tower in a bit – and with the aid of a pair of binoculars focus on the Gaumont and see what the new titles were.

It all gets a bit hazy, but what turned me around to seeing Carrie was, indirectly, the music of John Williams. Like every other geek male of my age I’d come to love Williams’ music via The Towering Inferno, Jaws, and some little films called Star Wars and Close Encounters of the Third Kind. One day in October 1978 I spotted a US import LP of something called The Fury – music by John Williams, directed by Brian De Palma. I’d already seriously fallen in love with cinema as an art form while watching De Palma’s Obsession, and been stunned by the score by Bernard Herrmann. The soundtrack for that film was the first full price LP I ever bought.

So De Palma and Williams had worked together. I already loved the work of each individually. I bought the soundtrack of The Fury that day without having heard a note, or knowing a thing about the film. That was quite some investment back then. But it proved a good one, because I loved the music instantly and unconditionally. And of course the fact that De Palma had made Obsession and The Fury meant I was going to have to get over my qualms about that Carrie poster.

It wasn’t long before Carrie turned up at the Gaumont again (in a huge 1100 seater auditorium with an enormous screen), and this time I saw it and loved it. Saw it is an understatement. It was playing on a double feature with Piranha. Two Sunday afternoons in a row I went and watched Carrie then the Joe Dante movie then Carrie again. Carrie was terrifying but brilliant. In some ways the ending was even more terrifying when you knew what was coming, and there also the added joy of watching unsuspecting members of the audience fly out of their seats and headbutt the ceiling.

But what about King’s novel? I’d already read ‘Salem’s Lot, then The Shining, which I borrowed from the library in hardback. So by the time I acquired a cheap secondhand paperback of Carrie I was already a big King fan and I remember three things about reading his debut for the first time. One is that I read it in the tower. We lived in a purpose built apartment in a modern church building. When the church wasn’t in use I had free reign of the entire site, which included a striking brick tower with a glass observation room at the top. It provided a fantastic view over the centre of Bournemouth and out over Bournemouth Bay from the Isle of Wight to the Purbeck Hills. I spent many hours up there revising for exams or reading.

The second thing I remember is that I read Carrie pretty much in a single session, presumably with a break to eat at some point. And the third thing is that, much as I found the book thrilling, gripping and almost impossible to put down, I also found it disappointingly straight-forward compared to ‘Salem’s Lot and The Shining. Clearly, great as it was, it was a first novel, and the books which followed were better. But still, what a first novel. I’ve read Carrie twice more since and it’s a great book. King was on fire, and did we but know it, revolutionising an entire genre.

So, did Carrie have any influence on me? Well around 1984 I was watching the film on its UK TV premiere with a girlfriend (the ITV network actually showed it uncensored at about 10.30pm on Sunday night). She had already seen the film on television while overseas, so I assumed she knew how it ended. Just for a laugh, at the vital moment, I grabbed her foot. She nearly flew off the sofa in abject terror. In the country she had seen the film in before it had been cut. The famous ending had ended up on the cutting room floor. I ended up in the doghouse.

But more fun than that: back in the summer of ‘79 I had not just free reign of the church itself, but when it was not in use, of the church hall next door. This building had windows looking out onto the pavement of one of the busiest roads in town, a major thoroughfare for holidaymakers walking to and from their hotels and the seafront.

With a friend we thought it would be rather fun to take turns crouching down below the window while the other advised when some targets, aka grockles, aka tourists, were just about to pass by. At the appropriate moment whichever one of us was below the window would suddenly thrust a bare arm up against the glass, knock loudly then slowly drag an outstretched, desperately grasping hand back down below windowsill level. The reactions of shock and surprise, including some screams, were gratifying. Shame we didn’t have any tomato ketchup.

Then one day there was a knock on the church hall door. Outside were two police vans. The police marched in, sat us down and interrogated us for 20 minutes. I counted five vehicles and 17 police officers. For two teenage boys playing a prank. One policewoman had the decency to look embarrassed. It must have been a quiet day. Eventually they went over to the church and checked with my father, who told them who we were and that we were entitled to be there. We pretended we had been playing table tennis. It was all a big misunderstanding.

So, me Carrie and Stephen King. It was the beginning of a beautiful friendship which continues to this day. Some of King’s books have been brilliant, some disappointing, but he remains the only author I began reading almost 40 years ago whose new work I still look forward to today. So bring on Mr Mercedes and Revival, with many more to follow. And, Carrie White, happy 40th. And RIP.

The Philip José Farmer Centennial Collection from Meteor House is one of the most comprehensive collections highlighting the authors wide range of talent.

The Ghost Club: Newly Found Tales of Victorian Terror is a unique collection from William Meikle, as if told by some of the most classic voices in literature.

CLUBHOUSE: Review: “North by 2000+” an anthology by Henry A. Hargreaves