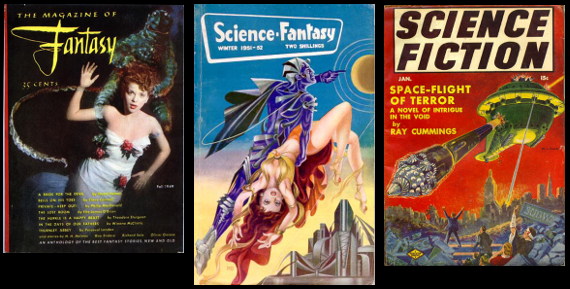 Several recent articles and reviews from various places and on various topics have gotten me thinking about two seemingly divergent subjects:  the definition of science fiction and the use of genre classification as a marketing tool, as opposed to an aid to the reader.

I’m agin ’em.  Ursula Le Guin’s keynote address upon receiving the American Book Award speaks strongly against the incursion of sales forces into the creative arts and she notes that advertisers and marketers are now routinely a (dominant) part of the editorial team at publishing houses.

This is due, no doubt, to the mistaken belief that one can corral art into a box and, upon doing so, one can tweak and tailor that box to appeal to a particular subset of the population, taking sales from the realm of wish fulfillment into the land of certainty.

Based on the logic of this thinking, what we are really looking at are publishers attempting to swallow their own tails.  Here’s the equation:

The process is inherently divisive.  It leaves no room for expanding the niche.  It self-limits the demand by cutting off exposure of the product even before it is out in the world.  It’s purpose is not to sell, but to service a known quantity.  The only significant number of new readers gained by an author will be those already within the niche.  In order to remain within the niche, the author must tailor their work to fit its requirements, rather than writing in an unfettered manner.  The author gets classified and ossified. The reader misses out on other works that might have some of their sub-genre in them, but not enough for them to qualify for the niche.  Works that service two or more niches can not find a home. Readers in general begin to have fewer points of contact for discussion among themselves – particularly if they favor one niche over another.  Further, this easy classification and the reward of always being able to count on finding new works within one’s comfort zone stunts the reading experience.

Every dedicated reader has had the experience of reading the unexpected and is usually well-rewarded for having done so.  However, rather than being encouraged to continually step outside our comfort zones, we’re being encouraged to sit back, relax and exert no effort.  All will be taken care of for us.  Stay in your rut, you’ll be just fine.

The major point, and the major fallacy of this methodology is that it concentrates on sure sales at the expense of building a wider market.  The price we pay is a lack of experimentalism and the growth of the art.  The price the publisher pays is diminishing the chance of publishing the next break-out bestseller.

I don’t like the divisiveness imposed upon us by the use of sub-genres, but I do find the higher level classifications useful.

I used to be happy with the combined Science Fiction & Fantasy.  I found it a useful guide to finding the books I was interested in reading at the library and the bookstore.  The world of literature consisted of two types of books for me:  those I was interested in reading (SF&F), and those that would steal time away from reading what I was interested in.  (Full disclosure:  I’ve read a lot of “the classics of literature” – as an English major I had to;  I’ve read a lot of myth and fable, as they form the underpinnings of all stories, particularly SF&F, and I’ve read a lot of non-fiction on a wide variety of topics – what author hasn’t?  The world of literature still only consists of two types of works as far as I’m concerned:  SF&F and those books that take time away from reading SF&F.)

The SF&F genre classification stood me in good stead, taking me from Abbot to Zoline and everything in between.  Some of it I really liked, most of it was worth reading, some small percentage was not. None of it ever deterred me from reading more.

The point is that this method of classification did not deter me from engaging with anything that was even remotely related.  It was a broad classification that was well-suited to the purpose of getting readers to sample a wide selection of authors and themes.  Sub-genre nichification says “everything else under the label of SF&F is NOT this particular sub-genre.”  Higher level classification (SF&F) says “everything under this label will probably have some appeal to you.”  You are left being encouraged to discover your own likes and dislikes, from a very broad range of offerings, not encouraged to find one thing you like and sticking to it.

(As an aside:  it may very well be that the demise of the magazines is due in some small part to this push for marketing niches;  the ‘zines have only ever classified within very broad ranges – and therefore are not capable of appealing to a sub-genre interest.  Specifically, they may publish stories that appeal to a niche, but not enough of them and not consistently enough to be classified as belonging to a particular niche.  They therefore can not command enough market share to sustain themselves.)

However, these days, I’m beginning to think that we need to add one more broadly classified genre to our top level, one that I think will aide greatly in discussion of various works, help eliminate some arguments and allow us to more precisely identify what we’re talking about.

I propose that we now place Science Fantasy on a pillar and stick it smack-dab in between Fantasy and Science Fiction.

I don’t view this as being divisive or pigeonholing, but rather a better title for what we are actually experiencing out in the reading world today.

As should be apparent to any engaged genre reader, the lines between fantasy and science fiction are blurring these days and have been for a while.  As should be pretty obvious to anyone with a shred of critical analytic ability, the vast majority of multi-media fare identified as belonging to our genres is neither fantasy nor science fiction, but rather a hybrid.  (Judging from sales of games, television shows and film, this hybrid enjoys the strength and robustness often enjoyed by hybrids in the natural world. In terms of metrics, it could be strongly argued that the unnamed Science Fantasy is the dominant form these days.)

I’d argue that the one single identifying factor that defines the purity of the Science Fiction genre is the role of and plausibility that the science inherent in a work manifests.

I’d argue that the one single factor inherent to all works that can be defined as pure fantasy is the creation of an internally consistent super-natural world.

What then do we call all of the works (the vast majority of what we are reading today) that fall between those two poles?

In fact, just about everything in theaters, on television and in our game consoles that’s labeled as Science Fiction or Fantasy is, in actually more properly defined as Science Fantasy.

There’s a great liberation to be had by adopting this label;  readers no longer have to excuse themselves for liking something that isn’t “pure”.  Authors will no longer have to justify their decisions to use or not use the latest knowledge.  No one need ever waste time arguing over the method of John Carter’s arrival on Mars.  We can take a guilty pleasure (liking a story that’s just plain fun, regardless of how many check boxes it misses) and bring it out into the light.

I think we’d all be a lot better off, in our discussions, our descriptions and our classifications if we accept that there is a world of literature that falls between the two poles of Fantasy and Science Fiction, of stories that are every bit as worthy of our attention, by ending the necessity of trying to fit everything into two ill-fitting classes.  Lets start talking about our genres as –

Intelligent robots have been part of the SciFi lexicon since before Fritz Lang’s seminal file Metropolis. While it’s fun to imagine what the world would be like with intelligent machines, the sad truth is that “strong” Artificial Intelligence (AI) will probably never happen. I recently read an interview in The New York Time Magazine recently […]