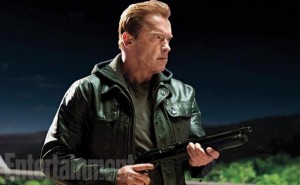 Arnie is back and the new Terminator film Terminator: Genisys has had its trailer released. Now I don’t know if this is just in the UK, but this was completely overshadowed buy another infamous character, that of Bond. James Bond. Of course he’s a British institution, so our media went a little crazy at the announcement of the new film’s title and cast. But, they completely missed the other exciting news, that of the new trailer, with Arnold Schwarzenegger back where he belongs.

The action in this looks pretty awesome, and Arnie even fights himself, the Terminator we saw in the very first film – cool! After everything that has happened in the previous films, everything has changed. Skynet plans to attack John Connor from the past and the future, so this time round the film very much focuses on both times in this franchise.

Check out the trailer below. Terminator: Genisys is in cinemas in July 2015.