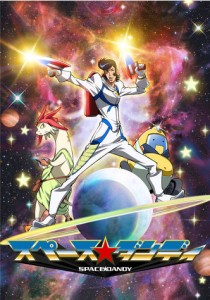 When it was announced that Cowboy Bebop director Shinichiro Watanabe was going to be coming out with another science-fiction anime, I was understandably excited. And then it was announced that the world premier of said anime, Space Dandy, would actually be on American television, dubbed in English. Let me reiterate—it was aired in the States before it was aired in Japan, already dubbed. This is a really big deal. The process to get a license and find actors to bring an anime overseas can be a long one, and it’s usually only attempted when a Western licensing company has faith that an anime is going to be worth the effort in terms of viewership.

Funimation seemed to have that faith in another Watanabe work; with both Cowboy Bebop and Samurai Champloo being extremely successful on Adult Swim over the last decade, it was plain to see that American late-night audiences were ready for more stylish, sophisticated cartoons from overseas.  And with BONES animation studio (Fullmetal Alchemist) pumping out the art, they were probably convinced that they had a sure thing.

And they were right. Space Dandy is everything I was hoping it would be: completely absurd, entirely self-aware, and beautifully rendered with a score that is groovy and danceable. It’s very reminiscent of those few light-hearted episodes of Bebop—“Toys In The Attic,” “Mushroom Samba,” “Cowboy Funk,” and just about anything that has to do with Ed—though there is no illusion of a serious story lying in wait for Dandy. 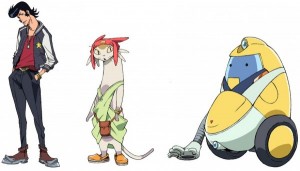 With his companions QT the robot and Meow the catlike alien, Dandy is on the search for unregistered lifeforms. Once again, like Spike from Bebop, he relies on hunting down others to earn his bread. In the episode that aired on this past Saturday night “Live With the Flow, Baby,” a villain has been introduced, a mysterious ape-like man named Dr. Gel who believes that Dandy is the key to some unknown power. But even this pursuit seems like a farce, meant to make a mockery of other anime within the science-fiction and shonen genres.

The animation is colorful and attractive, with similar physical elements as the characters in Cowboy Bebop, but the vibrancy of Samurai Champloo, albeit in a bright and sunny color palette. This is fitting, seeing as our hero pilots a ship called the Aloha Oe, complete with at least one surfer dude figurine. And the entire series has a sort of lurid truck-stop vibe, including a chain of titty bars, aptly named “Boobies.” Dandy as a main character would be pretty loathsome with his womanizing and his lax attitude, but there is definitely a glimmer of satire here, especially as he’s balanced out by QT, who is entirely fed up with his antics—a robotic voice of reason. Add Meow and his duck-and-run attitude into the mix, and this is a trio that’s going to be loads of fun to watch over the next twelve episodes. 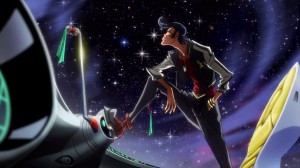 Space Dandy will be the first time I’ve kept up with a dubbed anime as it aired in about a decade, and I have high hopes for it. Funimation has a really good track record where dubbing is concerned, and they’ve picked some very talented voice actors who fit the bill quite nicely. I often have trouble getting into science-fiction anime, as most of them are weighed down by a heavy storyline. It’s nice to have a fluffy space romp in the mix every now and then, a series that reminds us that space is fun and cool and not just another venue for mankind to wage endless wars. I mean, the next episode is called “The Search For the Phantom Space Ramen, Baby.” No pretense, no hidden message—just good, weird, silly fun from Shinichiro Watanabe.

New Fiction: How Gaia and the Guardian Saved the World