What happened last nite to our favorite broadcast geeks? Find out in our weekly recap. 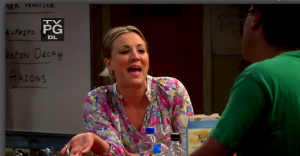 In the first episode of this season, Penny admitted to Sheldon that she was in a low budget horror film, Serial Apist, which Howard, of course, found on-line within minutes of meeting Penny. Two episodes ago, Penny agreed to be in the sequel, in which Wil Wheaton starred as the serial ape. This episode, “The Anything Can Happen Recurrence” opens with Penny describing the sexual exploitation she’s experiencing on the film set. It is clear that the writers are enjoying giving her scientific jargon to read as she describes how killer ape DNA is taking over her body, except for her cleavage. Sheldon, still reeling from his disillusionment with his study of string theory continues to look for a new field of study, asking Leonard for advice so he can dismiss the fields Leonard thinks might be interesting. Sheldon’s belief that he can simply switch from string theory to the study of axions, proton decay, or dark matter as if he were switching from working at McDonald’s to Burger King rather than changing his focus for a scientific study which requires completely different areas of research both plays to Sheldon’s arrogance and the common belief that scientists are all generic and interchangeable. The cold open with Leonard suggesting the reinstatement of Anything Can Happen Thursdays, although none of the three can come up with something to do. 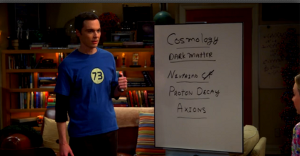 Returning from the first commercial, Sheldon tries to come up with something fun, Leonard wants to do something different, and Penny is interested in something free. Sheldon comes up with the idea of eating pizza, but eventually suggests participating in a Lord of the Rings reenactment group in Griffith Park. Leonard suggests going for a walk in search of a new restaurant.

Howard and Raj are hanging out at Howard’s mother’s house, where Howard’s mother is not feeling well. As with the Sheldon, Leonard, and Penny (SLP), the two are trying to come up with something new to do and Raj suggests watching a horror film, The House of 1,000 Corpses, a film outside his comfort zone, but a movie Emily wants to watch the next night. Clearly, the writers are setting her up to fit into the fannish vibe that underlies so much of the show, but rather than just making her another clone of the men on the show, they are using her to add in a different aspect of fandom with the introduction of horror/gore films. As they are about to watch it, Howard’s mother calls for help getting out of the tub, and Raj indicates that his friendship with Howard only goes so far. 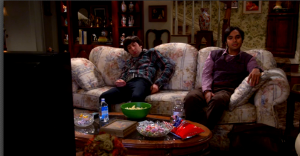 Returning to the A storyline, Sheldon is concerned about the idea of visiting a restaurant without checking out on-line reviews of it, not only exhibiting his need for control, but also a demonstration of how the use of the internet actually has changed the way people interact with the world around them, although Sheldon should easily be able to check on-line reviews from his cellphone as soon as Penny or Leonard chose a restaurant. Leonard’s suggestion of an Asian fusion restaurant leads Sheldon to point out that he is trying not to think about science in a joke that borders on the offensive with its stereotypical portrayal of Asians. Penny, meanwhile spots Bernadette and Amy having dinner together despite Bernadette’s claim that she was working late and Amy claiming to be ill. Rather than pass the restaurant by, Sheldon knocks on the window in his typical three-fold knock, asking them why they had lied through the glass.

Howard returns from helping his mother to find Raj reading the description of the film and appearing less than thrilled about watching it with Howard in preparation for his viewing with Emily.

A return to the restaurant allows SLP to confront Bernadette and Amy. The two explained that they needed a break from Penny and Sheldon because Penny has only been talking about how miserable her experiences with Serial Apist 2 have been and Sheldon is driving Amy nuts trying to select a new field of study. They just needed a night away from the constant negativity. When Penny asks Leonard if she is really complaining that much about the film, Leonard tries to ignore the question, causing Penny to grab Sheldon and go off on their own to gripe to each other, support each other, and find something to do. 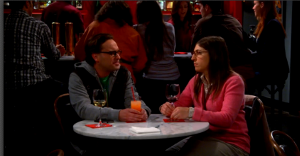 Following the second commercial break, Sheldon and Penny are eating at the Asian fusion restaurant, which upsets Sheldon’s need for order. Penny expresses her concern about how much she might be complaining about the film, but Sheldon assures her she isn’t, just before comparing anything she says to the adult voices in a Charlie Brown special.

Raj is having difficulties with House of 1,000 Corpses, and pauses it to describe some of the horrors from the film (which I am not particularly familiar with and, therefore can’t say how accurate his descriptions are) and which Howard compares to his mother’s dining habits. Raj tries to figure out why Emily likes gorefests like the Rob Zombie film and if there is something wrong with her. Howard doesn’t think it makes a difference because the key is that she’s dating Raj and that’s what’s important. Rather than look at the serious question, which concerns why certain fandoms appeal to different individuals, the writers go for a quick joke before moving on, which is unfortunate, because it did give the writers a chance to look at an aspect of geek culture which they’ve mostly ignored by making the four primary male characters all share the same aspects of geek culture throughout the series.

Returning to Bernadette and Amy, who are now joined by Leonard, the woman are trying to figure out how they can make amends not just for their lies, but also for their basic need to get space from Penny and Sheldon. Bernadette’s comment about dressing up as a Catholic Schoolgirl hints at the geek culture the four men enjoy, both in its role playing aspect and its costuming aspect, although not necessarily in the same way Bernadette is thinking of either activity. When Leonard comments on the honesty in his relationship with Penny, it elicits snickers from Amy and the implication from Bernadette that Penny lies to Leonard, who Penny earlier described as gullible.

Penny picks up a fortune cookie and suggests that what’s inside might give Sheldon an answer, harkening back to her revelation in the first season that she believes in psychics and superstitions. Sheldon gently corrects her, pointing out that the only cookie with something inside that actually solves all of life’s problems is an Oreo or a Nutter Butter. Neither of their fortunes are accurate for their personalities, and although Penny feels her fortune is good, Sheldon scoffs, pointing out that if it were good it would actually apply to her.

Raj is still struggling through the horror film and Howard pauses, again to recap the gruesomeness of the film. When Raj laments that Emily doesn’t like “traditional” feminine films, Howard points out that Raj fulfills that role in the relationship. When his phone rings, he learns from Penny that Bernadette is not working late, which he interprets as meaning that Bernadette’s guilt will cause the sort of roleplaying and cosplay that Bernadette referred to earlier. 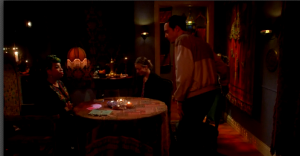 Penny finds a psychic and drags Sheldon into it.

Howard calls Bernadette and tells her that he knows and elicits a reluctant promise of cosplay from Bernadette. Penny texts Leonard that she has taken Sheldon to the psychic and Amy admits that she is jealous of how close Sheldon and Penny are.

Sheldon’s encounter with the psychic begins, he insults her abilities and profession, again, a call back to Penny’s comment early in the series about being nice to people who serve you. Penny explains that Sheldon is trying to find a new field and he claims his real question is about the next Star Trek film. The psychic ignores all of their insults and byplay and suggests they begin. In response to the Psychic’s statement that Sheldon is having problems with a women, he demonstrates a surprising amount of self awareness. While Penny is happy to interpret everything that the psychic says as accurate, Sheldon points out that she is just playing the odds in everything she predicts. When the psychic suggests that Amy is the key to Sheldon’s personal and professional happiness, he decries it as malarkey and leaves in a huff. 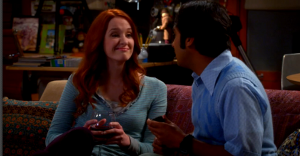 The next night, Raj is finally watching House of 1,000 Corpses with Emily. Raj admits that he watched it the night before and he found it disturbing and wonders what it says about the type of people who watch them. Emily agrees, but tells Raj that she’s turned on by these sorts of films, thereby fetishizing her fandom, similar to the cosplay/role-playing Bernadette does with Howard. The two snuggle up and the scene changes.

And a buttoned up Amy shows up at Sheldon’s door, opening her coat to reveal a school girl costume. Sheldon suggests that unless she is carrying the film Gravity, he really doesn’t understand what she is trying to do. 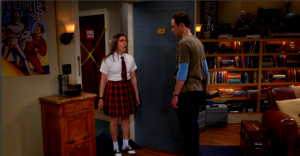 As has become more common with The Big Bang Theory, the focus of the episode and the humor has continued to move away from geek culture and the science and more into the realm of relationships. The lab and the university has tended to remain off stage as the characters interact in more mundane settings…apartments, restaurants, IKEAs, although in this episode the psychic did offer a setting which many fans of geek culture, if not strict science, do have an affinity for.

Today’s Fiction In Amazing Stories: The Pixie by Steven M. Long and The Jester by Michael J. Sullivan

The tale of an A-hole AI: the conclusion

An Olive Branch for the Puppies