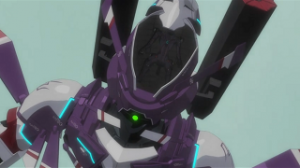 Gargantia on the Verdurous Planet #12 – Is it an act of insubordination if you refuse the orders given by your superior officer’s ghost? Or does that mech fight just count as damaging government property?

There’s only one episode left, and you can feel it. Not just in the climactic fight as Ledo formalizes his separation from the galactic army, but in how rushed it’s starting to feel. Wait, human sacrifice? Where did that come from? Did Striker take over a pre-existing cult and redirect it, or did she that ritual introduced as a way of getting rid of troublemakers? But if the point is to raise her subjects’ tech level so that they can make better weapons, why create a superstition like that? I really wish Gargantia had time to explain. 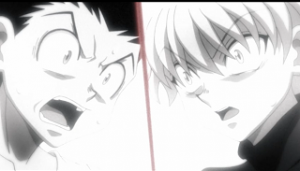 Hunter x Hunter #85 – If Kite was such an awesome fighting expert, you’d think he’d know that giving away a valuable possession just before a serious battle means guaranteed death. But now it’s too late, and it’s clear just how dangerous Neferpitou and (presumably) the other royal guards are, especially after only three Hunters are deemed strong enough to take them on directly, and one of them is the head of the Hunter Association.

And oh yeah, remember the eggs to produce the royal guards were laid before the Queen started eating Nen users. Now Pokkle and Kite get to contribute their abilities to the new king. He’s really going to be something.

Meanwhile, it’s back to training for Gon and Killua, and time for some reflection on one of the last things Kite said. A Hunter should always be hunting something– if Gon ever manages to track down Ging, what would he want to do next? 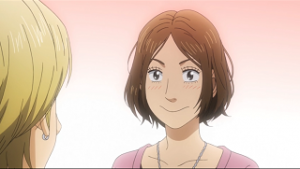 Space Brothers #63 – Well, it looks like the season ender will be Sharon’s terminal diagnosis. At least it’s not the series ender. Even though the news back in the spring was that it had only been renewed for one more season, Crunchyroll has it listed as a continuing series for the summer.

So we can look forward to seeing Mutta in the cockpit of a T-38 (the thought of which scares me, for some reason, more than anything Space Brothers has shown so far), maybe more of Kazuya’s plotline, and Vince’s further ideas on torturing his trainees.

For now, Sharon’s illness brings it all back to the point of the story: space! Serika wanted to become an astronaut because the possible key to understanding and curing her father’s disease was growing protein crystals in microgravity. He didn’t live long enough to see her become one, but now she’s going to be fighting to make it to space as soon as possible for her hero’s sake.

Diane talks with James Scott about his heroine, Holly, and the award winning Electric Woman series.

At the Table of Wolves is another alternate history in which people with superhuman powers affect the course of World War II, but it doesn’t compare to MJ-12 Shadows.