Created by Forrest J. Ackerman (the “Ackermonster”, Science Fiction’s #1 Fan) in 1957 and published by Warren Publishing, Famous Monsters was published in response to Universal Studios release of their “Universal Monsters” package of films to television “syndication”. (The country went Monsters Big Time – posters, model kits, Halloween costumes, local Chiller Theater television programming and the world has just never been the same since.

Warren Publishing launched a host of related zines – Spacemen (short-lived) being the most genre related companion.  Famous Monsters itself launched a bundle of competing titles, all focused on movie magic, makeup and special effects, as well as the stars and the stories.  Famous Monsters was itself famous for 4Es wordplay.

Today the magazine continues as both an online and specialty print publication, continuing Ackerman’s legacy (with his cooperation prior to his death). 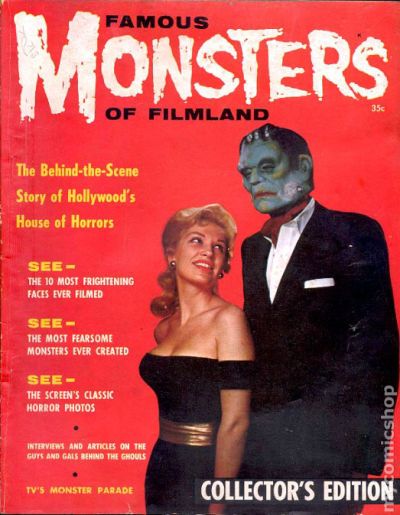 (back issues can be purchased here).

The website features film and television reviews, regular featured columns, issues of the magazine and news as well as a social networking component.