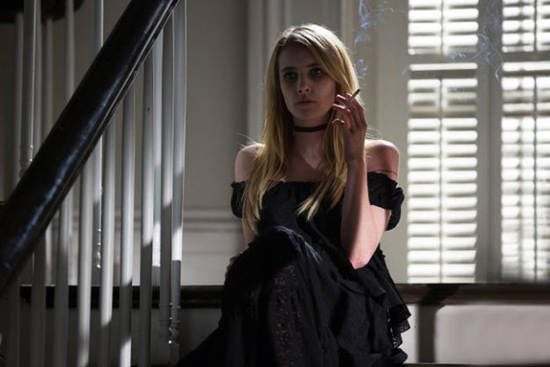 In “The Dead,” the seventh episode of American Horror Story: Coven, Queenie spends a good deal of the episode wearing a t-shirt bearing a skull ringed by the motto “I Can’t Get No Satisfaction.” That’s the problem facing many characters in this episode: they simply can’t find a way to be satisfied, can’t be happy.

For some of them—like Madison and Kyle—the lack of satisfaction comes from their status as recently resurrected. In a voiceover that sets the tone for the episode, Madison talks about herself as a Millennial, suggesting that “our one defining trait is a numbness to the world” and going on to reveal that she feels, literally, nothing since returning from the grave. Eating doesn’t sate her, burning her flesh triggers nary a nerve ending. There’s a hole inside her, she says, and it can’t be filled. Kyle’s frustrations are different in their detail—he can’t communicate, especially with Zoe (who tries to teach him language)—but lead to that same restless dissatisfaction. It should be no surprise then (spoilers, kids) that the pair find solace first in discussing their experience of death and then in Kyle plowing Madison up the side of an armoire, an act that Zoe, still toting a guttering torch for Kyle, walks in on.

Other characters can’t find satisfaction because they don’t truly know what they want. Hank, Cordelia’s cheating, witch-hunting, turncoat husband is one of them. After last episode’s revelation that he’s a plant by Marie Laveaux, sent into the lives of the Goode women to destroy their coven (to say nothing of Cordelia seeing evidence of his cheating due to her newfound second sight), he’s absented himself from Miss Robichaux’s school, seemingly holed up in a hotel. He’s not indifferent, though. He calls Cordelia, drunk and tears in his eyes, asking when he can come home. The depth of his dilemma are revealed when the camera pulls back to show that despite his sorry state and that he appears to be authentically lovelorn, he’s surrounded by a witch-killing arsenal and promising to see her soon (Hank seems saddled with all the portentous, cliched lines).

At the end of the last episode, Fiona had been charmed by the Axeman of New Orleans, leaving us unsure whether he fate would be one of satisfaction or violence. The Axeman, it turns out, poses no danger to Fiona and the duo spends what ought to be a satisfying night together. Despite enjoying herself so much that lights explode throughout the apartment where they had their tryst, Fiona is angry in the morning. When she begins to verbally slash at the Axeman, he immediately recognizes her problem: “You’re afraid of your pleasure,” he tells her, rightly guessing that she’s repulsed by how it makes her vulnerable. (That’s not the only thing that’s repulsive: the Axeman goes on to tell her that, as a spirit haunting the coven, he’s been watching her since she was a girl, first as if she were his daughter, later falling in love with her and leering by her side during her most intimate moments.) The intimacy is too much for Fiona and she turns from a relationship that seems to promise her something satisfying—turns away from it, at least, until the episode’s end.

“The Dead” also does a fine job of resurrecting something else: Zoe’s deadly sexuality. As we saw in Coven’s first episode, men who have sex with Zoe end up dead. Needless to say, she’s a woman who literally can’t get no satisfaction. That aspect of her character had completely slipped my mind (in fairness to myself, it seems to have slipped the show’s mind, too), but Madison remembers. After her assignation with Kyle, she finds Zoe, fresh from a shower, and reminds her of a key detail: Kyle has already died; Zoe’s deadliness isn’t likely to phase him. This leads to exactly what you’d expect: a threesome. At least, Zoe should be a bit more satisfied in next episode.

Moving Pictures, Silent Films; Haunted Houses on the Screen Seeing as how Western society is predominantly visual, it stands to reason that we begin with the presence of Haunted Houses in movies and on television. Being a visual culture, and owing to rapidly plummeting attention spans, movies and TV shows stand to reach the greatest […]