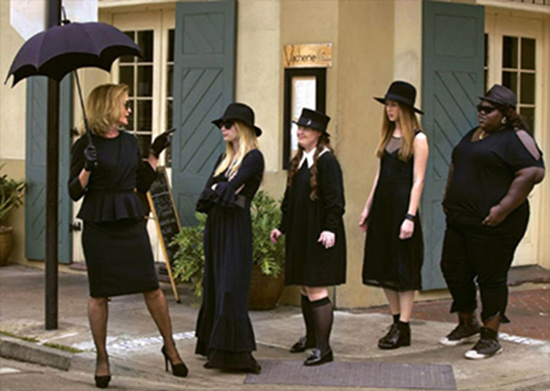 Depending on your position on The Walking Dead, American Horror Story may be the premiere horror series on American television today. With its two previous seasons, Murder House and Asylum, it has established itself as a source for stylish, sexy, disturbing season-long horror stories. But with the debut of its third season, Coven, American Horror Story owes a greater debt to the X-Men than The Craft.

Coven, as the name suggests, is about witches. In this case, a group of teenage witches attending the historic New Orleans finishing school, Miss Robichaux’s Academy for Exceptional Young Ladies. Based on the events of this first episode, though, it could easily be a version of Xavier’s School for Gifted Youngsters, except instead of mutants, its students are sexy teenage witches.

The core tension of X-Men is the philosophical split between one-time friends Prof. Xavier and Magneto. Xavier embodies an conventionally liberal, assimilationist approach to how mutants should exist in the world. Magneto, on the other hand, is confrontational, radical, a separatist. Their ongoing debate, and the battles that it spawned over decades of comics and movies, centers on how mutants—people born with exceptional powers that make them threatening to ordinary humans—should live in the world. That question, with witches replacing mutants, runs throughout this episode, too.

After opening in 1830s New Orleans and a house of horrors presided over by Delphine LaLaurie (Kathy Bates), who will play a greater role as the season progresses, we’re introduced to Zoe (Taissa Farmiga). In the middle of having sex for the first time, Zoe’s boyfriend has an aneurysm and dies. This event prompts her mother to disclose a truth about their family: that many of the women in it are witches, born with great, but also dangerous, powers. These powers, in this case, caused Zoe to accidentally kill her boyfriend. To protect her, and help her learn to control her powers, Zoe is sent to Miss Robichaux’s. If that sounds familiar, you’ve read X-Men comics. Mutant power manifests in a frightening way and family ships kid out is a fairly standard way to get a new mutant into the school. This scenario seems to happen most often with female mutants, Rogue being Zoe’s the closest parallel (Rogue’s powers prevent her from having skin-to-skin contact with other people, while Zoe’s powers mean that she can literally screw people to death).

At the school, Zoe meets her classmates: Madison (Emma Roberts), a spoiled movie star who used her powers to kill a director after he criticized her work; Queenie (Gabourey Sidibe), a “human voodoo doll”; and Nan (Jamie Brewer, who also appeared in Murder House), a clairvoyant. The school’s headmistress is Cordelia Foxx (Sarah Paulson, who appeared in both previous seasons). Foxx is essentially Prof. X; her philosophy is that witches must hide their true nature from the world, that it’s too dangerous for them to be open, and that they must learn to control their powers. While Prof. X and Magneto’s bond was simply friendship, the Magneto in Coven is a closer relation to Cordelia Foxx: her mother. Fiona Goode (Jessica Lange, another recurring actor in the series) is the reigning “supreme,” the most powerful witch in the world, and someone increasingly of the opinion that witches can’t cower in the shadows. (This dynamic is also, somewhat predictably, played out between the generally cautious Zoe and the wild child, Madison.)

There’s more to the episode than just this X-Men riff, though. Fiona is obsessed with aging and death, driven to find a way to remain young and vital. Cordelia hates her mother and is actively trying to kill her. Plus, there’s lots of clunky dialogue and oddly staged, but compelling, camerawork.

First episodes of new series (as the first episode of each season of AHS basically is) are always difficult: they require introducing new settings, new characters and their situations. In this case, that means introducing each witch’s special gift (in Coven, witchcraft seems not to be a generalized skill set, but rather a specific [mutant?] power unique to each witch). We learn what each girl can do during a meal stocked with lines like “I get it, you’re clairvoyant” and “I don’t feel anything, I’m a human voodoo doll” land like hunks of unchewed food spit onto a plate. In another scene, Fiona tells Cordelia “a storm is coming.” In the pantheon of dialogue cliches, that ranks near the top (along with “and so it begins” in my copy). While AHS hasn’t sported David Milch/Shonda Rhimes-caliber dialogue in the past, this is conspicuously weak sauce.

Also initially worrisome are some of the directorial choices of camera angles. This episode is packed full of odd angles: sideways shots that put characters perpendicular to the floor, overhead shots that are upside down, other odd, off-kilter moments. At first, these seem like bits of artifice, showing off for their own sake. As the episode progresses, though, and these shots become more frequent, they accrue into a sense of the unusual, the disturbing. In an episode that is otherwise largely straightforward and fairly light on its horror tone (with the exception of the very unpleasant torture scenes in 1830s New Orleans), they’re effective.

Still, with a few exceptions, we’ve seen more mutant hijinks than horror in this season of American Horror Story so far. I don’t imagine that will continue to be true, but once you’ve seen the X-Men inside Coven, it may be hard to unsee them.

A New Generation of Star Wars