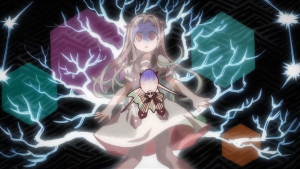 Toilet-Bound Hanako-kun finale – Just when Nene has started to entertain the idea that maybe she actually likes Hanako, as in likes him, along comes another magical creature with a cold splash of reality. Hanako is manipulative, dismissive, and treats her like nothing more than a janitor half the time. Wouldn’t Nene prefer to be a princess under the sea, celebrated for her beauty and strength, doted on by the noble young men of the realm? Not, apparently, if she has to spend the rest of her life as a fish.

It is an unfortunate part of the bargain that when a manga is brought to TV, the adaptation will get as far as it can and then just stop, leaving everyone hanging. This finale at least finds a way to temporary closure, looking back on Nene’s adventures and the slow change in her attitude toward Hanako.

Whether any of the dangling plot threads are picked up again is entirely up to the Japanese domestic market. An anime show typically only serves as an advertisement, with the real money being made on collector DVDs and other merchandise. I hope it sells well in this case; I’d love to see more of this. 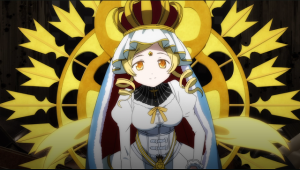 Magia Record: Puella Magi Madoka Magica Side Story season finale – Yachiyo decides she needs to interfere, but only so she can tell Iroha she’s breaking up the band. Even this is not enough to placate the Magius organization, so Iroha has to convince Yachiyo to allow a friend group in her life and dodge a thousand blazing rifles as a superpowered Tomoe Mami comes after both of them.

In this case, we’ve already been promised the second half of the story (probably in July or October), so it’s worth considering the answers we’re left with in the meantime. Apart from the fact that anyone who starts holding mass rallies and ranting about übermenschen is probably not the person you want to trust to save the world, what’s really going on with the Doppel power? Why does Yachiyo say it’s dangerous? Why do some of the magical girls have to apparently be bespelled to go along with the Maguis organization? What really happened to Ui and Nemu? And finally, is the downside to Yachiyo’s wish really what she thinks it is?

You can bet that Yachiyo’s survival power hasn’t killed Iroha yet, at least, and we should see them crawl out of that hole just as soon as the series resumes. Till then! 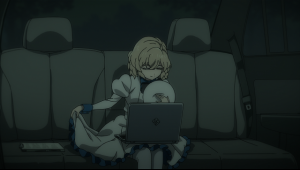 In/Spectre finale – At long last the Steel Lady is gone and Rikka is temporarily defeated, but there’s still a whole episode to go, so it gets filled up somehow. Saki goes back to her life, Kurō admits that maybe he is a bit attracted to Kotoko, or maybe resigned to it being his fate to be with her, and somewhere out there, the Internet rages on.

That sure was a whole lot of show for not much story, and if there is one thing I can praise, it is the fortitude of everyone involved in stretching that story out across 12 episodes. I really liked the show this was originally, with the eccentric, hyper-confident genius and her sidekick solving the problems of the supernatural sort. To see it turn into talkfest about how to pwn someone on the Internet, with a protagonist trapped in an endlessly repeating jealous-girlfriend schtick, has been a huge disappointment. A huge, slow disappointment.

This is one to hope that the DVDs don’t sell well, because there’s still more out there. The series of novels behind this runs to at least 12 volumes. Maybe they’re better as prose, but this is a story that should never have been animated.