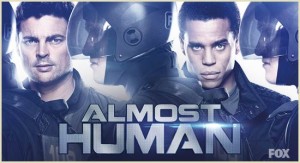 If you’ve seen the new TV show, “Almost Human,” you’ve seen the homages it pays to “Blade Runner”; “I, Robot”; and, in my opinion, “The Island of Dr. Moreau,” among others. Yes, we have the unlikely cop partners in John Kennex (Karl Urban) and Dorian (Michael Early), the lab worker who’s more comfortable with cyborgs than humans (Rudy Lom), and the tough police boss (Lili Taylor as Captain Maldonado), but what intrigued, and dismayed, me was the tech…the cyborgs.

In the Almost Human universe, many sex workers are cyborgs. However, several human sex workers have recently gone missing, and John and Dorian are sent to investigate. They speculate that someone is incorporating human DNA into cyborg prostitutes, which is illegal. And when Rudy began to take apart one of these cyborg prostitutes, noting that human skin has pheromones that increase attractiveness, in that moment, I asked myself, ‘What does it mean to be human?’ That was the overall question, of course, of the show. But then I began to see a disturbing pattern.

The owners of the club where the cyborgs plied their trade were male. The two main characters were male. All of the sex workers, human or cyborg (from what I saw) were female. Many of the cyborg prostitutes were also women of color. In fact, one of them had to be ‘terminated’ for having human DNA. Given that she was programmed with minimal intelligence, she quietly acquiesced to having her existence extinguished.

What implications do these portrayals have?

I did not see any main recurring characters played by women of color who were not sex workers. And the cyborg harlots were repeatedly subjected to dehumanizing acts, such as having their skin removed. Given the close resemblance of cyborgs and humans, would being able to commit such an act without ‘killing’ anyone further devalue human life?

I realize this universe is dystopian, and disturbing images are sometimes meant to act as a commentary on society, but are the writers trying to portray a horrible future as a result of our actions today, reflect the racism inherent in Hollywood, or promote the degradation of women through the use of technology?

I’ll be watching next week to see which way the writers are leaning in this regard.

Marketing 101: Walk Before You Run

Astronomers Just Spotted One of the Biggest Black Holes Ever