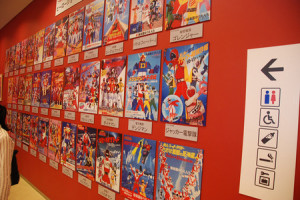 Remember how we took Baby to Korakuen last week? While trotting from the merry-go-round to the Pixie Cups, we passed a display of vintage posters, as seen at left.*

What a treat was in store when we got home and poked around on Youtube. The best of the videos we found was this one. You simply have to watch it. 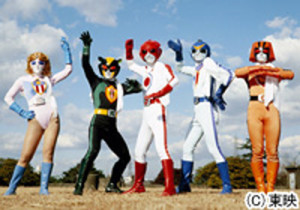 Battle Fever J was a forerunner of the Power Rangers: four guys and a girl in superhero suits, saving the world from “the mysterious deity Satan Egos.”** The characters are Battle Japan, Battle France, Battle Cossack (why?), Battle Kenya (insane!), and Miss America.

In this iconic image, Miss America does the beauty queen/ballerina wave; Battle Kenya prepares to pounce; Battle Japan gets to look relatively normal; Battle France is caught trying to do the Walk Like An Egyptian dance; and Battle Cossack, of course, is about to break into a Cossack dance.

In real life (in the show), Battle France is a hairdresser. Of course he is. And Miss America? What’s she doing there? Well, it appears the show was partly inspired by Marvel’s Captain America. The producer asked Marvel if they could use Captain America, and Marvel said, “No dice. We already sold the TV rights to Universal. But you can have Miss America—her comic’s not selling very well, anyway.”***

So this (left) became this (right).

That mask looks like a prototype version of one of those freaky robots.

Miss America’s real name in the show was Diane Martin, which was the actual name of the actress who played her. Ms. Martin must have been one of if not the only American woman on Japanese television back in 1979. It didn’t work out too well, evidently. She was soon sidelined and then replaced by a Japanese actress. She acted in one movie in 1981, and then vanished from the internet’s ken. I feel oddly sorry for her.

Aw, no. Shurrup. How can you feel sorry for anyone who had the fantastic good fortune to be involved even for a few episodes with the glory that was Battle Fever J? Those kung fu stunts! Those costumes! The weaponized disco dancing! For two short years, all things hackneyed, nugacious, proto-Gundam, peri-007, and pre-X-men came together in a dazzling series of small-screen donnybrooks. The sentai franchise has never again quite achieved Battle Fever J‘s sublime kookiness.

Battle Fever J attracted some controversy in its day. The problem was that the Battle Kenya character’s costume was black, and this was taken to be racist. This criticism missed the point, of course. The whole thing was racist! Openly, naively racist, in the annoying but completely non-malicious sense of the word that will be understood by any gaijin who’s ever been stared at/run away from/randomly complimented in a small Japanese town.  It’s just as well the show reached the end of its run before the idea got around that having characters of one race play characters identified with another race is also racist, because all the characters in Battle Fever J are portrayed by Japanese people, with the brief exception of Miss America, of course.

I sometimes feel that a certain spark was lost when the Japanese pop culture establishment gave up the art of the blatant rip-off. There was a weird alchemy in the DNA of Battle Fever J: this is what happens when you take an all-American concept like the superhero and feed it into a mentality steeped in total war and manzai. In a way, Battle Fever J was a visual cover version of the original Batman TV show.

The Japanese don’t do that any more. What’s on TV for kids now? I don’t actually know because we don’t have a television, but One Piece springs to mind. This is a wacky, wildly original series that flowered from a single manga author’s imagination. Of course this sort of thing is marvelous, but it’s a shame that the other can’t coexist with it. Sophistication has its costs, among them a needless horror of the truth summed up in the old axiom:

He writeth best who stealeth best ideas both great and small;

For the great soul who wrote them first from Nature stole them all.

*I did not take this picture. It was taken by the owner of Plum Research Diary, who kindly posted it on his/her blog.

**Quoted from the show’s Wikipedia page. This is worth a quick peruse in its own right. Hilariously, some stuffy Wikipedia editor type has placed a note at the top of the page: “This article may be written from a fan’s point of view, rather than a neutral point of view.” I ask you! Who the hell else is going to write an article about a shambolic 1979 Japanese TV show?

***However, Marvel did not sell Toei the action figure rights. So Miss America was the only Battle Fever J character who did not have her own action figure, much to the puzzlement of small fans.