While I’ve been reading SF for ages, I haven’t participated much in the fandom aspects of the genre. I’ve only been to one other convention and I only made it for a single afternoon. Needless to say, three days seemed like a marathon. 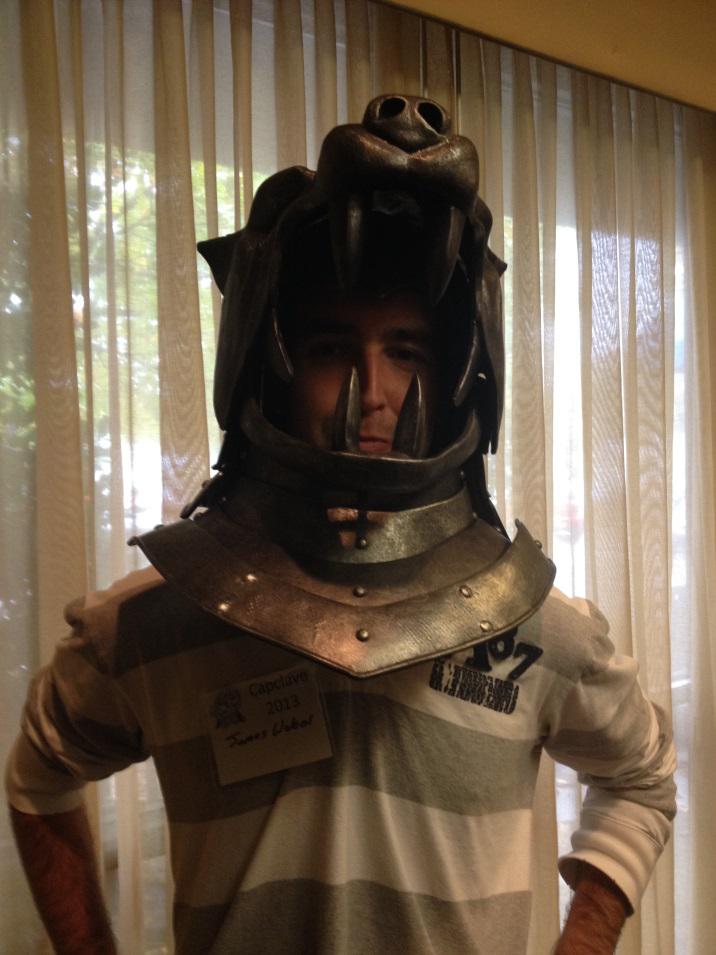 Ahh, where to begin? In my mind the plan was simple.

And now, as I attempt step two, a full three days after the completion of step one, I see that it is not so simple. Do I report on the panels (there were a lot of them)? Do I describe my experience meeting George R. R. Martin? What about all the other authors I met? What about the Bar? Isn’t that where most Con Reports seem to take place? And the other fans? What do I say about them . . . ?

I suppose the short answer to this question is yes, I tell you all of that and hopefully a little bit more.

Day 1: Get over yourself! You’re a fan like everybody else!

In order to explain that header I need to give you some concept of what I expected to take place at a convention. While I’ve been reading SF for ages, I haven’t participated much in the fandom aspects of the genre. I’ve only been to one other convention and I only made it for a single afternoon. Needless to say, three days seemed like a marathon. I’m in pretty good shape but the most I’ve ever run was half a marathon (13.1 baby!). I drove the 35 minutes to Gaithersburg with my mind shifting shapes between Tony Montana after a mountain of cocaine (I’ll Crush Those Cocka-Roaches!!) and a . . . something that’s really timid. The writer/editor part of me was like “Oh how convenient that they grouped all these other writers and editors together in one place for me to make connections with.” but the part of me that’s seen The Matrix over 100 times (and that estimate is conservative) was like “What if they find out I don’t watch Dr. Who? I’ll be jettisoned out of the building!!” So, just as I opened the front door of the Hilton, both aspects of my persona came to full maturation. I was a changed being.

I was a Timid Montana.John W. Campbell

Turns out I wasn’t at the front door of the Hilton at all (the front doors open on their own; it’s very ‘Next Generation’). I was at the side door. I gave the security guard my best Timid Montana grin, which I imagined nearly stopped her heart (and not in a good way) and made my way to the registration table. From there, it was pretty smooth sailing. I walked around the Dealer’s room, attended a few panels, texted people I’d met at my last convention to see if any were in town. None were and sadly I was all business with any new friends I met. I still didn’t know what these ‘Cons’ were about.

At least not at Capclave. I also didn’t stay the night in the hotel during the convention. This is probably my biggest regret. Now I know, book your stay in advance! Anyway, I went out Friday night with some friends from school which left me sufficiently hung over on Saturday. However, I think I made a good showing. Still nerded out for just about 4 hours at various panels and readings. The dealer’s room loved me on Saturday. Walked out with two anthologies (one edited by Robert Silverberg, the other by John Campbell Jr.) and nearly dropped $50 on a George R. R. Martin anthology as well. Alas, they were sold out by the time I made it over there.

I think the most striking part of the day came towards the end. I listened to a reading by John Hemry who’s published under the name Jack Campbell (so many Campbells!). I’d been hearing John’s name around the convention. Everyone seemed to be buzzing about how ‘different’ his writing style is. I had attended a few panels about writing good Military SF. Apparently the secret lies in reading good military history. They recommended Sun Su’s Art of War, and a book about the limits of a human in terms of the load they can carry into battle (alas even my stellar memory and the power of google cannot recall the title), and another book about logistics and supply chain. All very interesting concepts and things which I had never really considered as a reader let alone as a writer. This appeared in my mind to be the State-of-the-Art in Military SF.

So, as I listened to Hemry read, I was struck by a couple of things. The first was that all of his characters seemed to have ethnic sounding names (in this case I think Spanish or Mexican?) and Hemry put on an accent while reading the dialogue (nice touch there). The second thing that struck me was how true Hemry was to this conception I had recently formed of what ‘good’ Military SF should be like. It was like all of these panels had been talking about him the whole time (maybe they where?). Sadly, I’m not sure it was what I’m looking for. It seemed too technical. As an SF reader, that isn’t hard to run into. What put me off was that the technical side was not the science involved but with the characters. Explain to me the minute detail of a particle accelerator and the parts I don’t understand will shroud the story in an air of mystery which is still fantastic. Explain to me the mechanics of a man getting demoted and it just reminds me I have work on Monday. But, I believe in second chances. Hemry looks to have a lot of short fiction out. That’s my jam so maybe I can give a better report next time.

Day 3: Please Mr. Martin, Will You Sign My Baby?

Finally, day three!!! The home stretch. And this time I was ready. Up early, and decidedly not hung over. Sunday was panel day and a friend of mine was supposed to give three of them. Of course I wanted to see them all but only saw two of his and then a few others. My business side (Business Montana?) wants to say that my favorite panel was the one on constructing Ebooks which was amazingly useful. My Timid side, which I will heretofore call my ‘fan side’ because it was no longer feeling timid, knows the panel I enjoyed the most was the one entitled Robot Love and Alien Dating. I won’t lie, I blushed. I also heard the words ‘dinosaur’ and ‘erotica’ used to describe a sub-genre. Again, I blushed.

When I wasn’t at panels, I was listening to authors read from some of their works. I had gone to some readings on Friday and Saturday, but I feel that the readings I attended on Sunday were by far the best. Specifically, James Morrow read from a chapter of his upcoming book (due out 2015!) which I felt was quite humorous. I’m not familiar with any of James Morrow’s other work but I think I’ll have to pick some up. That is assuming I make it through the mountain of books, novellas, and short-fiction anthologies I picked up (also assuming I ever finished this post!). It will certainly be fun to try though.

I dedicated my last hour of the convention to standing in line. I was rather embarrassed because pretty much this whole weekend was dedicated to George R. R. Martin and I didn’t have single work of his to get signed. I had read a good deal of his short fiction but all of that was on a Kindle. No physical books required. I suppose worst case scenario, he could have signed some portion of my body which I would have been forced to never wash again. I think best case scenario I would have presented him a child to sign, which I still would have been forced to never wash again. I went to target and bought A Game of Thrones in paperback.

All in all, I had a great time at Capclave 2013. I was a bundle of emotions the entire time (which I hope this post was able to accurately portray) but I think to a certain degree, so was everyone. When I look back at it now, I realize how convoluted my whole perception of a Convention really was at the start. All the maneuvering, planning, and expectation . . . wasn’t the real reason I was there. Everything really came together for me as I stood in line that last hour waiting for Mr. Martin. I talked with the lady behind me about Zombie novels and whether or not Orson Scott Card is a pedophile. I got my picture taken in a giant helmet (perfect replica of the Hound’s armor from GoT). I blinked in my picture with Mr. Martin.

Capclave was a chance to build connections with people sure. But these connections were really more about sharing experience. About which book in The Wheel of Time you were still stuck on. About someone spilling opium on your hardback of GoT at Bonnaroo. About getting your picture taken in a giant helmet!

SF Signal is a phenomenon.  This past year at the Chicon 7 Worldcon, the website was nominated in two categories – Best Fanzine and Best Fancast – and walked home with the honors in the Fanzine category, the first website to do so, and in its very first year of eligibility.  1,922 Hugo ballots were […]