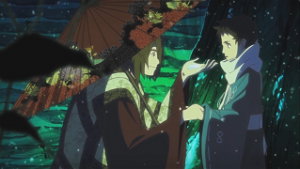 Kyousougiga #5—Yakushimaru’s childhood, version 2: He was the son of a local noble whose entire household was massacred and his house burned to the ground. Yakushimaru attempted to commit seppuku, but was found and adopted by Myōe. Then Myōe marooned him and his conjured siblings in Looking-Glass Kyoto, but not before somehow learning about DNA—despite it being the mid-1800s—and forcing Yakushimaru to become his stand-in.

This leaves Koto-the-girl as the only character likely to be the biological descendant of Myōe and Koto-the-rabbit. This also leaves some disturbing questions about how far back Myōe was planning the trip through the metaverse that took him to the Shrine. Did he take Yakushimaru in because he already anticipated a need for someone to take his place? Was he already Inari by then? How could he have anticipated what Koto-the-girl was going to name her spirit assistants, anyway?

About those names: A-un is a term formed from the first and last signs in the Japanese syllabary, and used figuratively to mean a close or inseparable pair. It also has something to do with a traditional pair of guardian statues seen outside Japanese temples, which are sometimes known as Agyō and Ungyō. 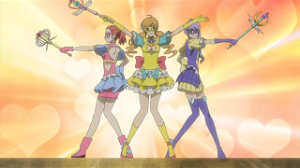 Samurai Flamenco #5—Trying to prepare a quick description of this show for the anime panel at Orycon, I realized that every episode since Masayoshi won Goto over can be summarized as “yet another person is sucked into the growing whirlpool of insanity.” This week it’s a threefer: two new Flamenco Girls and the revelation of how big a part Masayoshi’s grandfather played in the genesis of Samurai Flamenco.

The only headline characters left to be pulled in now are Masayoshi’s manager, the editor of the Japanese equivalent of TMZ, and the old guy who hasn’t even been introduced yet. Who do you want to bet will be next? I’ll guess the old guy.

In the meantime, Mari’s escalating her tactics just to ease her boredom, to the point where she’s scaring the very people she wants to help, and she’s developed a major crush on Goto. I’m starting to think this is leading to a climactic scene of Masayoshi having to rescue his friend from the clutches of a supervillainess. 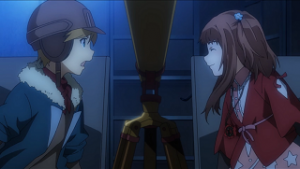 Galilei Donna #5—The message this week for young viewers is that if you care deeply about science, your peers will admire you and you will make unexpected friends. Or, alternatively, that being a total geek or sticking by your geek friend will get you killed. In either case, no automatic weapons at the dinner table!

Rather than steampunk, this week it feels eerily like the characters were dropped into the Chicago of Fallen Angels, complete with lawless bandits and a new Ice Age, but not yet at such a level of desperation that people are burning their own city to stay warm.

I guess it’s because this show is aiming at younger viewers that it’s concentrating on the goshwow aspects of the story, like the magical airships and the story of Galileo and his unnamed paramour (?) rather than the work of decoding where the next sketch is. I find that disappointing, but that’s not to say it’s objectively a problem, just a personal reaction. 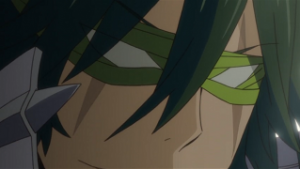 Kill la Kill #6—Things took a turn for the conventional this week with the introduction of chi (or qi if you prefer the Chinese transliteration), which is the standard all-purpose magical ability powering many a martial arts movie. Satsuki has enough of it to blow away an entire gang just by glaring at them, and presumably this is the power that the Goku uniforms enhance.

This episode invites us to think about just where the Life Fibers are coming from. Geographically, they’re probably from whatever operation Mrs. Kiryūin is out of town overseeing. But how exactly are they manufactured? What are they spun from? I have a feeling that answer is going to be extremely unpleasant.

Whatever Happened To Egoboo?