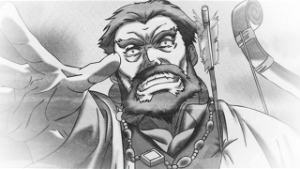 Yona of the Dawn #22 – Yona nearly sacrifices herself to get the signal firework launched, but after Sinha and Jeaha rush to her aid and take out the crew of the cargo ship, she’s back on her feet again. And when she spots her enemy, she’s able to do what would have once been unthinkable for her– she executes him without hesitation. Poor Yan Kumji doesn’t even get a chance for a villainous monologue. Which is as it should be.

After the apparent climax of the episode, it’s time for everyone to head back to town and celebrate and relax and get spectacularly drunk. Yona lets her guard down as much as anyone, wanders off, and just happens to bump into holy crap, that’s Soo-won. All right, writers, you got me there.

Because by the standard rules of the fantasy genre, it’s not time for the big confrontation yet. Yona hasn’t collected all her dragons. (At this rate, the Yellow Dragon is going to have to wait for the show to be renewed for another season.) It’s not even clear that the dragons could help her in a direct fight with Soo-won– after all, he’s also a descendant of the emperor their ancestors swore to protect– but they would have been very useful storming the castle. And now she’s been discovered, cut off from them and Hak.

A story that can surprise you like this just when it seemed to be following the obvious path is a rare treasure. The writing has been good throughout this series, and it’s at its very best now. 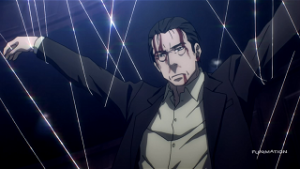 Death Parade #9 – Tatsumi and Shimada do indeed share a connection, but it’s more than symbolic. Tatsumi really is Shimada’s intentional victim, but in a weird sort of altruism, Tatsumi is willing to accept it as the price of a step toward justice. Both of them are irredeemable and heading for the void.

But all this is just to finish setting the scene for the moment this series has been building up to all along, when the Dark-Haired Woman finally snaps and denounces Decim and the entire system of judgement. It is, as she says, as though it’s deliberately designed to bring out the worst in people so as to find excuses for throwing them away. For the first time, she tries intervening directly to change the outcome, but Shimada is far too riled up by then to listen.

It’s not enough to say the system is unjust, though; the next question is, what would you replace it with? Nona sneaking emotions into her latest arbiters is part of her answer, and it’s time for us to see the rest and how the Dark-Haired Woman fits into it. 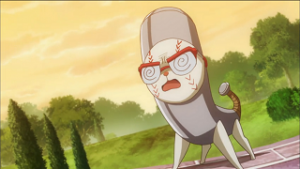 Cute High Earth Defense Club LOVE! #22 – When Yumoto comes down with a cold, his big brother fears the worst. And rightly so, because before anyone knows it, Yumoto has succumbed to the fearsome power of moe.

What is moe, I hear someone ask? Well, the typical moe character is an exceptionally childlike girl. She’s even more cute and big-eyed than the average anime character. She often wears glasses and is usually comically clumsy. She is very shy and speaks in a tiny, quavering voice. The overall effect is of someone entirely unable to care for herself, but so gosh-darned adorable that you want to protect her like a little sister.

Well, that’s the idea, anyway. Many anime viewers actually find moe annoying as heck, especially since these characters have become so common over the last several years. This would apparently include the writers of this show. I say go for it, gals.

On a more serious note, between the ending of this episode and the preview of the next one, it sounds like both the Journalism Club and the student council are working for the same overlord. No chance of playing them off against each other, then. And I wonder if anyone’s going to get around to opening that new door? 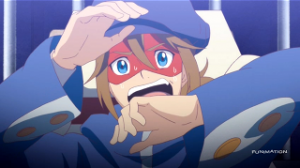 Yatterman Night #9 – For longtime fans of the Yatterman/Time Bokan franchise, the crowning moment of awesome in this episode would be when Galina puts on the trademark Yatterman mask. Truly, he has very nearly become like the legendary Yatterman-1! Meanwhile, the Dorombos are reduced to being the hapless victims for an episode so that he has someone to rescue.

In fact, looking back at the last few episodes, what we have is a show slowly morphing from its unconventional start to something approximating the contours of the other shows in the franchise. As Galina becomes more and more like the original hero, Voltkatze and Elephantus are fading to echoes of the one-dimensional comic-relief henchmen from the past shows. No doubt it’s stirring strong sentimental associations for many viewers, but it’s a pity to see characters that were so well-written at first being reduced this way.

One thing it’s still got over its predecessors is the number of problems it tries to solve with nudity. There cannot possibly have been this much nakedness in the entirety of both past Yatterman series. Honestly, they should have let the translators go ahead and call it Yatterman After Dark. 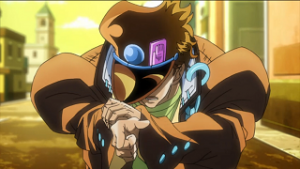 JoJo’s Bizarre Adventure: Stardust Crusaders #33 – Yes, Jōtarō only just learned to summon his Stand a month or so ago, but it was clear from the start that he’d been honing his juvenile-delinquency skills for many years. True to form for someone who only fights little kids, Alessi can’t even stand up to a reasonably assertive 12-year-old. A couple good punches are enough to knock him silly and return our heroes to their proper ages, because… uh… well, come to think of it, the exact mechanism of Alessi’s Stand was never explained, because the story was too busy getting all the mileage it could out of the poop jokes and the boobs.

But anyway, everyone’s an adult again, and Polnareff leaves his earring behind with the lady who has captured his heart rather than put her in further danger. Because in a hyper-macho setting like this, unknowingly giving a guy a hot time while under the impression that he was a lost, scared little kid is totally the same thing as romance.

Next up, if they continue to follow the sequence from the opening, will be Osiris, god of death and dismemberment. That sounds like a recipe for a change of mood.

The evolution of contemporary art through science fiction