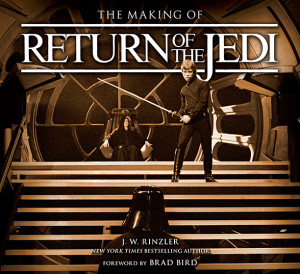 The latest making of book from the original Star Wars films has finally arrived. This book is one that you will keep on your coffee table with pride (I know I have). I was lucky enough to be sent a copy ahead of the release (available now at Amazon.co.uk) which, quite frankly made my September! Flicking through the pages of this book makes you feel like you were there on set with the cast and crew. This book is in honour of the 30th anniversary and is the wonderful creation of bestselling author J. W. Rinzler. Rinzler was given access to the Lucasfilm archives and found the most fascinating revelations from behind the scenes of the film. The book is full of previously unpublished photos, concept artwork, script excerpts, on-set interviews, storyboards and commentary. Here is a sneak peak to a few of the pictures in the book:

It is great to have such an in depth insider look at one of the most famous sci-fi films of all time (and personally my favourite Star Wars film). Now all I need to do is get the back catalogue and clear some bookshelf space…

Source: The Making of Return of the Jedi: The Definitive Story Behind the Film by J.W. Rinzler. Foreword by Brad Bird. Published by Aurum Press, £40.

I was 8 years old, and I had gotten my greedy little hands on a copy of The Hobbit. I read it by nightlight early in the morning before my family awoke. The Lord of the Rings followed shortly after, and I even wrote my grade five book report on the plot structure of the […]

Steve’s second Halloween column this month, in which he tries to do teeny-tiny reviews of 27 movies. Let us know if he succeeds or falls flat on his face.