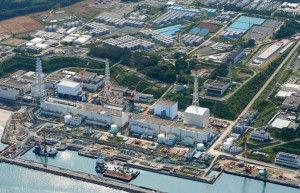 While the amount of radioactivity released into the environment in March 2011 has been estimated as between 10 percent and 50 percent of the fallout from the Chernobyl accident, the 400,000 tons of contaminated water stored on the Fukushima site contain more than 2.5 times the amount of radioactive cesium dispersed during the 1986 catastrophe in Ukraine.

And that’s not to mention the spent fuel rods stored in a pool on top of Building 4, which is doing a slow-motion Leaning Tower of Pisa impression. If I were a Tepco executive at this point, I would strongly consider hiring bodyguards.

But when I worry about this stuff out loud, my aunt V. often reminds me that when she was a child, the United States was exploding nuclear bombs all over the Nevada desert, often in secrecy, with a fantastically cavalier attitude towards the health and environmental risks obtaining. This has not prevented millions and millions of Americans who were children then from attaining a ripe age in good health. No incident is just like any another incident but I accept (with teeth gritted and nails digging into my palms) that my concerns about Fukushima Dai-Ichi are probably closer to paranoia than prudence. And I still endorse nuclear power as a worthy alternative to fossil fuel.

Nuclear weapons, of course, are another story. The book you should be reading right now, if you care even a little bit about, er, not getting mushroom-clouded or dying a horrible death from nuclear fallout, is Command and Control, by Eric Schlosser. Yeah, the Fast Food Nation guy. Schlosser opened a lot of eyes, including mine, with his takedown of the fast food industry, and now he’s done it again with an account of sixty years of foul-ups, life-endangering secrecy obsessions, and near-catastrophes in the nuclear defense industry. You may have noticed news reports that it’s now confirmed that the 1961 Goldsboro B-52 crash actually came within a hair‘s breadth of turning the Eastern Seaboard into a cinder park. One little electronic toggle switch saved us. How many of you guys would never have been born if that bomb had gone off? I wouldn‘t have. It was Schlosser who pried that little detail out of the Air Force. Read this book and make noise.

Of course, sad to say, Eric Schlosser is probably preaching to the choir. I know I am. Nuclear apocalypse was the doomsday scenario of my childhood. Perhaps reflecting the fact that the actual risk of nuclear war between the superpowers had waned by that time–the fear of a thing often seems to wax and wane in inverse proportion to the likelihood of its actually happening–post-nuclear scenarios in children’s literature grew seriously grisly in the 1980s. Have you ever read When the Wind Blows, by Raymond Briggs, he of Snowman fame? My eyes got all hot just from typing the title. As a child I almost, almost had to get my mother to put that one into the grate, too (see anecdote at the end of this post). In the end I held out, but I doubt I will be sharing When the Wind Blows with Baby.

Another memorable downer was Children of the Dust, by Louise Lawrence. This one, like Brother in the Land by Robert Swindells, is a book where the goodies die and nothing good comes of it. That gave me a shocking jolt. It would be many a moon before I met George R.R. Martin’s masterwork, but when I got to the scene in A Game of Thrones where Ned Stark is executed for being a good guy, I felt a shiver of recognition. Flashback to the nuclear-apocalypse nightmares of my childhood. It’s the same spirit of nihilism that informs them all (1) and it’s not necessarily a good thing to inflict on a preteen. Give us a little bit of redemption with our horror, ya know? In the end of Children of the Dust, it turns out that mutated human beings, impervious to fallout because they’re covered with silky UV-blocking fur (or something), will inherit the earth. I did not consider this to be a happy ending. It was more like the final turn of the screw.

I haven’t read a nuclear apocalypse story in a long while now. Are there any being written? Zombie apocalypse stories seem to have taken their place. (Here’s what I wrote a couple of months ago about the zombie apocalypse.) The gap between fantasy and reality is widening. And yet the risk of a catastrophic nuclear accident has grown no less since that B-52 crashed in North Carolina. Time and chance catch up with us all, not only the Ukrainians and Japanese. Moreover, the North Korean, Pakistani, Chinese, and–soon–Iranian bombs now menace world populations as much as US and Russian arsenals do. So where are the authors grappling with scenarios of multipolar nuclear war, or envisioning what happens after an accident while workers at Fukushima Dai-Ichi are trying to remove spent fuel rods from the pool on top of Building 4 with a remote-controlled crane? Those are stories we ought to be reading … stories I want to read.

But maybe not twice. And not late at night when the wind is blowing.

1. I’m only tentative about GRRM’s nihilism. It all depends how the end of the series plays out. This is an author known for leading readers up the garden path and then spinning them around and pushing them into the fishpond, so some sort of redemption may yet be in store for Westeros.