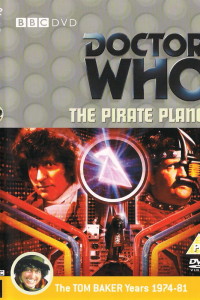 Back in 1978, a young comedy sketch writer sent a script to the BBC’s flagship SF show, Doctor Who. Far from setting hearts fluttering with excitement, its demands for special effects such as time sinks, flying cars and planets that devoured other worlds caused frustrated executives to scream in horror. However, script editor Anthony Root and director Pennant Roberts knew they had a gem on their hands and they pushed to produce the script. Roberts said the draft script was

“sparkling and original and had some wit and style and that was certainly something that you cherished”.

That script was The Pirate Planet and the young scriptwriter was ex-bodyguard and chicken coop cleaner, Douglas Adams. It’s still one of the most bizarre and astonishing shows ever transmitted in Doctor Who’s fifty year history.

Today, editors and publishers would be desperate to find a new script or novel with Adams’ name on the cover. His unfinished works are being rewritten and sequels are being added to his oeuvre all the time. Yet there is nothing like coming across Adams’ work for the first time, in all its brilliance and wit. It’s like the shock you get on diving into water that is much colder than you expected.  This is a man who can compare the riddle of human existence to a puddle and still make it sound profound.

As readers, we too can now enjoy the same stunned awe as the Doctor Who team on seeing an Adams work in progress. After his horribly untimely death, his works were collected into a final volume, The Salmon of Doubt, which includes fragments from his last novel, a Dirk Gently adventure. Even by Adams’ notorious inability to meet deadlines, The Salmon of Doubt was a bit late.  Twelve years late. But who cares? Adams was a genius. Just look at the synopsis he sent to his editor: 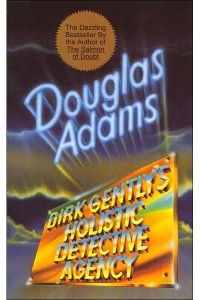 Dirk Gently, hired by someone he never meets, to do a job that is never specified, starts following people at random. His investigations lead him to Los Angeles, through the nasal membranes of a rhinoceros, to a distant future dominated by estate agents and heavily armed kangaroos.

Dirk Gently is Adam’s feckless, hard-smoking detective, whose work relies on “the fundamental interconnectedness of all things”. In his first appearance, Dirk Gently’s Holistic Detective Agency (1987), Gently investigates a time-travelling mystery that involves aliens, Cambridge dons, and the dodo. For an author who is often criticized for a free-form approach to plotting, it also features perhaps the best and cleverest resolution of a parallel universe storyline ever written. Oh, and the hero doesn’t even bother to appear until page 89, no doubt because he spends most of his time in bed.

This is a trend that continues in Gently’s second appearance, The Long Dark Tea-Time of the Soul (1988) where the ever-idle protagonist lies around smoking in bed and worrying about the contents of his fridge. As always, everything is connected and it all makes sense in the end. 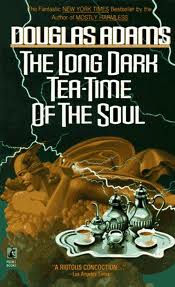 There is a big leap in style between these two novels. The first book was set in a SF universe (albeit with the hysterical interlude of a reluctant poltergeist) whereas The Long Dark Tea-Time of the Soul features Norse gods and magic. Nevertheless, there is some terrific writing in the second book and it is very funny, particularly Dirk’s friend ‘The Great Zaganza’ who writes horoscopes for the newspaper wherein he always leaves cryptic and abusive messages for our hero. 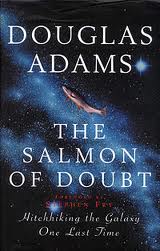 This brings us back to The Salmon of Doubt, rescued and reassembled from Adam’s Apple Mac computers by his friends and collaborators after his death. It’s a tantalising glimpse of what could have been. The setting of the Gently books follows the trajectory of their author’s own peregrinations. Dirk Gently’s Holistic Detective Agency is set in Cambridge, where Adams was born and spent his university years. Following his sudden success with The Hitchhiker’s Guide to the Galaxy, the second book is much more London based, especially the area round Islington where he made his home for much of his career.The Salmon of Doubt, on the other hand, takes us into a jet-set world of intercontinental flights to the homes of millionaires in California and New Mexico. This was the milieu in which Adams worked in his latter years, a rich and famous man, but one still tortured by doubt and writer’s block.

Like other geniuses such as Michelangelo and Leonardo, much of Adams’s work lies incomplete but the works in progress still have greater power than thousands of lesser efforts made by less demanding artists. Not only do his books have the power to reshape your view of reality, but he is also one of the few authors who deserves that cliché that always appears on the jacket of comic novels, no matter how drab they really are. The Dirk Gently series, like all of Douglas Adam’s novels, is truly ‘hilarious’.

The Artful Collector: Vulgaris Triumphus? on Judging (SFWA) Magazines by Their Cover

As I am preparing to self-publish my first novel, I thought I would talk to some friends who have gone down this road ahead of me, to see what they did, what they think now that it is done, and hopefully offer some inspiration to those of us taking the road less travelled. I got […]

February is a month on hold, when time is frozen, waiting for something to happen. It’s so bad that the greeting card industry had to create a holiday just to keep from having to shut down for the month. Fortunately, all that stasis makes it a perfect month for reading; thankfully, we’ve got some excellent […]