One of the most difficult things to get a handle on is what to expect in the way of income from publishing.  The first problem is there is a wide range. Some authors sell a few hundred books, while others can sell in the millions. For any new author it’s best to set your sights for “the midlist” because by definition that is where most authors will land. After all it’s called “mid” for a reason.

For years, I’ve used Amazon Rankings (both on a per book as well as per author basis) as a way of trying to determine “my place in the world” lower ranks indicate that you are selling more than person xyz but all that really provides is a relative idea of who sells better than whom but it doesn’t help to determine actual sales numbers.

The industry standard for analyzing book sale is Nielsen Bookscan.  They report “point of purchase” sales information which is important as it indicates actual sales to people as opposed to shipments to bookstores. Before Nielson it was the “books shipped” that publishers looked at but they never knew how many books were sitting unsold on shelves, and how many would be coming back in the form of returns.

Over the years Nielsen has added more and more outlets to its data gathering such that now it records about 80% of the books sold. Prior to the addition of Walmart data (added in January 2013) their reporting rate was estimated at around 75%.  Amazon grants access to their own Bookscan data for any author via their free Author Central program. This was a great perk as Bookscan subscriptions are very expensive ($5,000 – $10,000).  But thanks to the IBPA small publishers can get access to Bookscan for a much reduced price and I recently splurged so I could get better educated on the industry as a whole.

Bookscan prohibits the re-publishing of their data but it does paint an interesting picture of the standard book release. It confirms what I’ve heard in the past that the majority of the sales come very soon after release and then fall off greatly.  From looking at the Bookscan data I’ve been able to get a pretty good feel for debut releases, solid titles from midlist authors, and blockbuster sales. I think that by removing the names of the authors and the titles in question that I can share some of this data in a very generic way.

First I’m going to share data for a debut author: 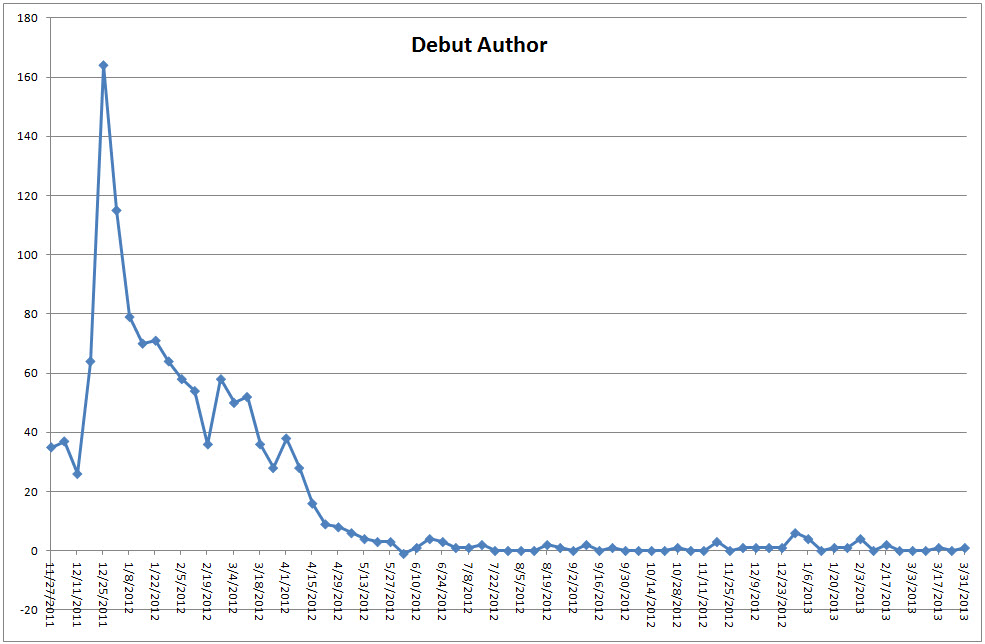 As you can see there is generally a single week’s peak and about 13 weeks of moderate sales. This particular book was released in early December 2011 with the paperback about six months later. As you can see once the paperback came out the hard cover has sold next to nothing.  Assuming this author sells 70% print and 30% ebook we can estimate their total income on this title as follows:

Given that advances for debut fantasy authors run $5,000 – $10,000 this author seems to fall squarely in the mid-list. It should be noted that at this point this book has pretty much run its course.  Sales for the trade paperback for the last 6 months is under 20 sales and the paperback not much better at 73 sales. It will probably get another boost when the second in the series comes out but I think it will probably top out around $10,000 over its life.

Now I turned my attention to a more established author. In this case I chose an author who has been releasing at least 1 book a year since 2004.  The following graph comes from their 11th release from one of the established fantasy publishers and the paperback hasn’t come out yet. 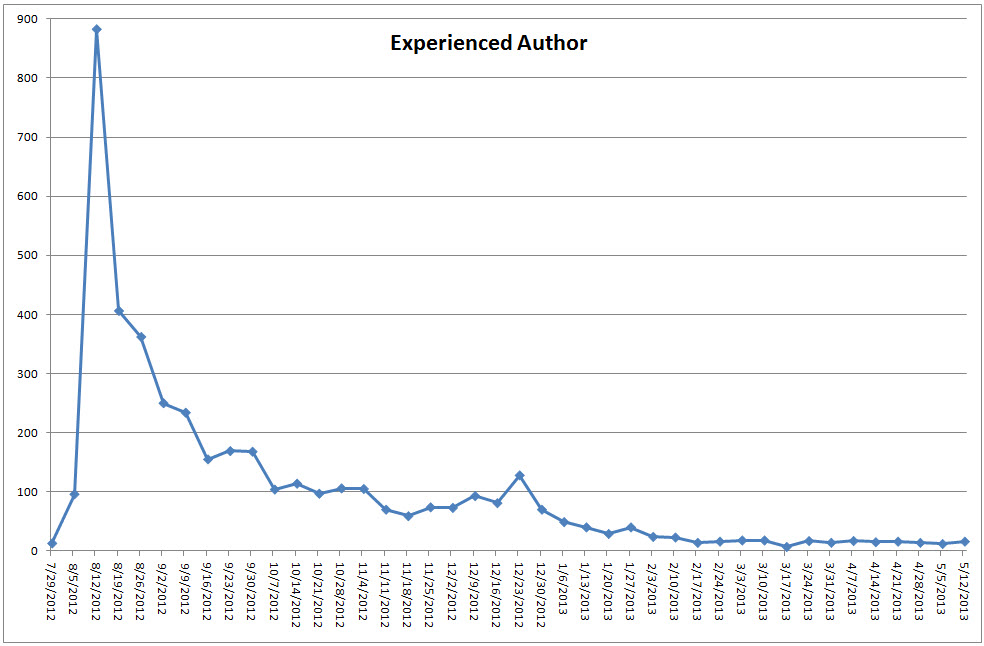 As expected, their peak is much larger than the debut author’s and while the period of time before the fall off starts (14 weeks as opposed to 13) it does take longer (22 weeks) before the sales start to decay to just a few sales a week.  Also we see a “Christmas bump” which is pretty indicative of all sales graphs I’ve reviewed.  The paperback won’t be out for a few months yet, at which point the hardcover sales will probably decay down to a book or two a week.  It is pretty consistent at around 15 books a week currently so we can estimate its first year’s sales as follows:

Unlike the debut author, this title still has some legs. A lot will be determined by the release of the paperback and I wouldn’t hazard a guess at what it’s final numbers will be. One thing I will speculate is that it probably has another year’s worth of income. For mos people $20,000 a year isn’t enough to live on and, like many authors, this one still has their day job.  It’s sobering to think that even after a decade in the business and ten books released that a day job is still required.  Unfortunately this is more of an exception than a rule.

In picking these two authors I tried to choose ones that represented solid mid-list players.  Obviously there will be wide variations on either side f these two but I think if trying to get a “feel” for what to expect these are good representative cases.