In a recent post about onmyodo, the ancient and now trendy school of Japanese occult practise, I touched on the concept of foxiness. No, not that kind of foxiness … well, sorta(1) …

In Japanese folklore, foxes are like snakes or black cats, and worse than both. They often have nine tails. They get up to all sorts of mischief, such as impersonating or possessing humans and acting out maliciously. They have that feral je ne sais quoi.

The fox spirit trope has really caught on in the West. It seems to have been popularized via the manga route. I don’t know of many Japanese novels featuring foxes, but manga? Oh yeah. And now it’s a standard trope of Japonesque fantasy written by Westerners.

If you want to close a writer down and make them apologise for having been born, label them a cultural appropriator. No defense is possible, because like racism, cultural appropriation can be unintentional. If you feel that your culture has been appropriated, it has been!

But I don’t like making writers feel like a pair of wet socks tossed into the corner. And anyway, these discussions get especially ludicrous when white Anglo writers start accusing each other of appropriating another culture. So no accusations of cultural appropriation are implied in what follows. Rather, I want to add some nuance to the cultural appropriation critique by talking about a different kind of scenery-pinching: Japonisme.

In the words of the Encyclopedia Brittanica, Japonisme was “an aesthetic cult that had a major impact on Impressionist painting. Japanism began in the mid-19th century, just after Japanese trade with the West was opened, and lasted for a generation in France and England. Japanism depended upon the careful study of imported works of Japanese art, usually recent popular prints (Ukiyo-e) rather than important older paintings.”

It’s time to popularize this term again, and broaden it to include literature.

Conveniently, I have in front of me two examples of contemporary American Japonisme. The first is The Fox Woman, by Kij Johnson.

The Fox Woman retells a folktale about a man who falls in love with a fox who has turned into a woman. As is the way with folktales, the original story is pretty simplistic, so Johnson adds lots of sex and angst. She knows a lot about Heian-era Japan. A lot. The book is painstakingly researched. The language flows with a suitably old-timey rhythm. Most aptly, the book is told in diary format–shades of Sei Shonagon! The fox, the man, and his wife all keep diaries.

This was a fast, pleasant read (all the faster and more pleasant because I skipped the sex scenes). The dialogue bounces along with verve, especially in the fox’s bits.  Naturally, this isn’t the way people talked in the Heian era (if the Tale of Genji is anything to go by). Naturally, verisimilitude isn’t what we, the readers, are after. We don’t want a realistic portrayal of Japanese history or folklore. We want a fantasy steeped in a facsimile of that atmosphere, an atmosphere imbibed from a hundred half-remembered kimono prints, pictures of cherry blossoms, wartime myths, and spoken intros to Wu-Tang Clan tracks. We want Japonisme. And that’s what Johnson provides.

The Fox Woman falls down where it tries too hard to achieve verisimilitude. Johnson has an odd tic of naming objects with their Japanese names hyphenated with their English names, e.g. kiji-pheasant, uguisu-nightingale, tanuki-badger (are tanukis part of the badger family?? I always translate them as raccoons). This is going too far in the quest for authenticity. The Japonische fantasy is undermined, if anything, by these reminders that it’s all happening in another language. It’s like the weird habit the Japanese authorities have of naming natural features twice in English, e.g. Sumidabashi Bridge (“Sumida Bridge Bridge”), Tamagawa River (“Tama River River”). Either translate everything or don’t translate anything. Preserve the fiction. 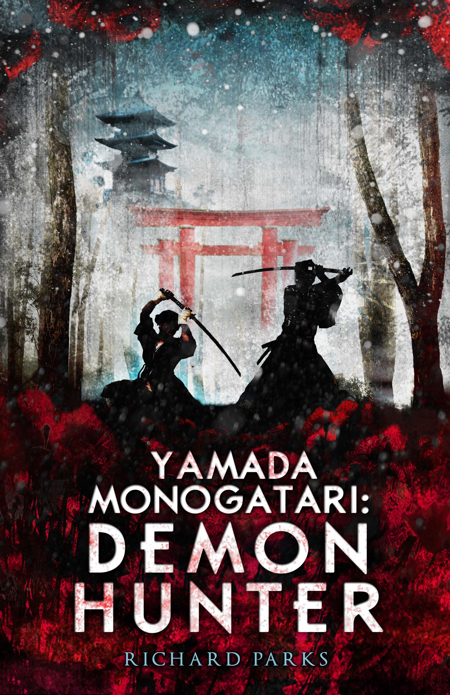 Our second example of Japonisme–more or less randomly selected, I should underline; there’s so much of it out there–is Richard Parks’s new collection of stories, Yamada Monogatari: Demon Hunter. Full marks to Parks for not translating the title. (Monogatari means Chronicle or Tale; Parks correctly surmises that readers will either know this already, or not care.) Like The Fox Woman, Yamada Monogatari is set in Heian-era Japan. But it tries less strenuously to conjure up a period atmosphere. It’s actually The Dresden Files a thousand years ago, with Japanese monsters(2).

Interestingly, the first story deals with a fox spirit, and gives a cameo to Abe no Seimei!

I found the noir-styled narrative voice a bit jarring, although it goes down easier as one gets used to it. The anachronistic tone is deliberate, of course. Parks is playfully emphasizing that what we’ve got here is not to be considered an authentic depiction of Heian Japan, even if you believe that oni and youkai really did mince around the country in the flesh back then (and who’s to say they didn’t?). It is Japonisme. Parks’s hero, Yamada no Goji, is an authentically Japanese character on paper, and yet his worldview is radically un-Japanese. His mercenary approach to life and his heart of gold come from a whole different costume party. Like I said: Harry Dresden in a kimono with a katana–but this is not to derogate Parks’s achievement. People like kimonos and katanas, and they like Harry Dresden. Why shouldn’t the twain meet, and have a nice escapist romp?

You will know by now that I’m no purist, and I did prefer Yamada Monogatari to The Fox Woman. Parks is having fun, while Johnson is trying just a little too hard. This is how Parks deals with potentially unfamiliar Japanese words: “As monsters went, youkai ran the gamut from ‘mildly annoying’ to ‘slurp your intestines like hot noodles.’ We won’t be forgetting that in a hurry.

But how would we counter charges of cultural appropriation levelled against one of these books? I had a look on the internet and found that Johnson has preemptively offered a defense: “All artists are outside culture.” No comment on that, really. Moving on! I myself would say that both these books meet the key criterion of Japonisme: pinching the scenery without trying to pinch the characters.

Writing about another culture is an act of artifice. To do it honestly, the artifice must be obvious and beautiful, and it must therefore be correct in every detail. Paradoxically, too much detail brings the whole effort down(3).

But there’s another way to use ideas that originate in other cultures. It’s the method adopted by David Garnett in his prizewinning novel Lady Into Fox. The book does what it says on the tin: it precisely and unsparingly portrays what happens when one Silvia Tebrick, a married lady living in the English countryside in the late Victorian era, turns into a fox. It’s brilliant. And don’t even think about telling me that it has nothing to do with Japanese fox spirits. Garnett published Lady Into Fox in 1922, at the very height of the Japonisme craze. He was a member of the Bloomsbury Group, who were into that stuff. Have I ever told you about the time Virginia Woolf, Duncan Grant, and four of their friends dressed up as Ethiopian royalty and got themselves shown around the HMS Dreadnought? Which was cultural appropriation at its very purest, and a nasty mean trick to boot–a perfect example of Bloomsbury smugness and snobbishness. But Bloomsburyite though he was, David Garnett displays none of Woolf & co.’s overwrought navel-gazing in Lady Into Fox. It is a marvellously honest story: an inversion of a Japanese idea, internalized and reborn in the author’s own idiom. Read it! The ebook is free on Amazon, thanks to Project Gutenberg.

Internalizing, inverting, reinventing. The Japanese are very very good at this, and I’d love to see more Anglosphere authors move beyond Japonisme and do it, too.

1. Jimi Hendrix picture completely unrelated to the topic of this post.

2. For that matter, The Fox Woman is The Little Mermaid a thousand years ago, with a jealous wife thrown into the mix. And did I mention lots of sex?

3. I did a bit of this myself in my salad days. It was done in a spirit of cringingly earnest admiration. Cultural appropriation usually is, and that is why it should be taken as flattery.