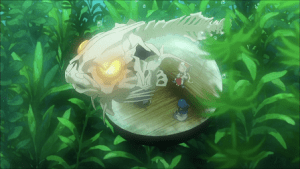 Hakumei and Mikochi #9 – Hakumei and Mikochi go out for a day on the river with a couple of friends, only since one of those friends is Sen, this means travelling in a bathysphere melded with the skeleton of an undead fish and powered by the rhythm of a tambourine. And then it means being stuck at the river bottom when the fish gets scared, because reanimated abominations of science have feelings too, darnit!

But mad science is no match for Mikochi on a crafting binge, as Sen soon finds out. When Mikochi gets it into her head to make Sen something nice, this leads to a marathon of gathering materials, arguing over design points, but eventually a very nice dress. And then the song replacing the usual ending theme this week is, I believe, Konju’s song for Sen.

The fascinating part of this episode is that it is just as interested in the details of cloth dyeing as it is in the workings of its fantasy science. Both are equally an occasion for a geeky sense of wonder. And it’s nice to see Sen given a focus episode that gives her more depth and detail than just the eccentric scientist stereotype. 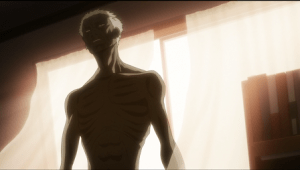 Kokkoku #10 – The Yukawas and their allies throw everything they can at Sagawa (literally), and it still isn’t enough to create an opening for Juri to kick him out of Stasis. But it is enough to run him out of energy, and when it turns out that Heralds are not conveniently made of meat, he accepts that he is defeated. Still determined to drag out his time in Stasis, he resolves to make Juri and Grandpa sit through his life story.

Sagawa was raised in a more standard New-Age-y cult with weird ideas about purity and a leader who felt free to help himself to his female followers. Discovering the latter led Sagawa to… erm… that was a weird spot to end the episode. The unfortunate pacing challenges that come with adapting manga strike again.

Growing up in a cult certainly explains that Sagawa would have the necessary skills to infiltrate another one, but that didn’t do much to explain how he wound up as the sort of person who wants to see what the end of the universe looks like. More on his spiritual journey next week, I guess. 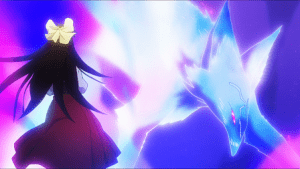 Hakyu Hoshin Engi #8 – The body of So Dakki once belonged to a young woman who was to be married to the emperor of Yin, but was taken over by the immortal fox who has been controlling Yin for generations. Why the being now known as Dakki needs to do this is unclear; her sisters appear to be traditional foxes who can just take whatever appearance they choose and are immortal in their own right.

Perhaps a human body was essential to Dakki being able to infiltrate Kingo Island. There, it turns out she hasn’t just subverted its leader, but also Ōtenkun, preying on his vulnerability when he was mistreated as a hostage. Which requires such bad decision-making on the leader’s part that I’m going to assume he was already under Dakki’s influence at the time.

This sets up Ōtenkun to talk Yōzen out of his plan to help Konron, or at least to hesitate long enough to ensure disaster. If that’s what has actually happened…

The visuals are better than ever this week– I had a hard time picking just one frame– but the narrative is getting jumpy again. What was that memory of Dakki feeling helpless about? Was it necessary to throw in at this point? 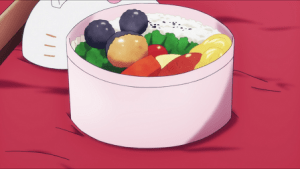 Beatless #8 – If you were wondering what kind of budget this show had, there you go: enough to get the okay to use a Sanrio character, but not enough to license Disney ones. (Kind of ironic when you consider that a century in the future when this story is supposed to be set, Disney will probably have swallowed Sanrio too.)

The blank gaze of Hello Kitty watches over Arato and his friends for a discussion about how adding human features to things evokes human emotions. Set against this is Ryō and Arato yelling at each other about whether or not it is okay to have sympathy for an android. Everyone acts like these ideas are completely alien concepts that have just come into their world, and this is where my suspension of disbelief falls apart.

This is taking place in Japan, the freaking capital of anthropomorphization and synthetic beings. This the place where everything including airport customs has a cute mascot. The country that has anthropomorphized everything including computer viruses, train stations, and its own constitution. The place that has given the world hugging pillows, Hatsune Miku, and the word “waifu”. Future Japan has to have suffered a massive loss of cultural memory.

And even if that can be explained away, Hakumei and Mikochi is doing a better job of exploring the relationship between people and possibly sentient constructions anyway. Not just this week, but with the business about the spirits of objects a few episodes ago.