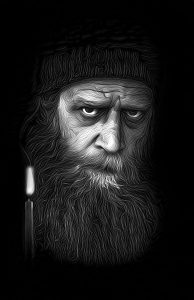 He was called Copernicus by the inhabitants of Town 7, though it was unclear how and why he had acquired the name of an astronomer long since forgotten. It might have been an ironic reference to the positioning of the shanty town’s many huts in careless circles around the nine eating houses, that themselves resembled frozen planets orbiting the local administration building. There was also his habit of spending long evenings outside his round cabin looking towards the sky for no apparent reason.

Notwithstanding the speculation, the name suited him and so he kept it. He knew that it had a life of its own, that the name followed its own orbit around Town 7, even sometimes moved to Town 6 and Town 8. It always returned, though, and he would respond with kindness when it did.

And people did. At first, embarrassed with the awkwardness of their errand. Then, suspicious when they discovered that his hut was as poor as their own, that his talents didn’t grace the dust-colored surroundings.

But few went away without having made their request, and Copernicus always did what he could to oblige them.

He had constructed a small bench that would seat as many as three. If there were more they would have to sit on the floor. For his own use he possessed a little stool that he placed opposite his guests.

He always gave them time to settle down, to feel the weariness in their bones. In the olden times, he had practiced in a ground-floor flat painted completely white, with exquisite stucco patterns on the roof.  He had often had to ask his clients to pace up and down the stairs a few times to ease the tension in their muscles and minds. He never had to do that anymore, which was somewhat lucky as there were no stairs left.

He usually talked a little with people. He asked about their age, their family, and how and where they spent their days. Most especially, he asked them what they had liked to eat.

This enquiry made them relax even more. He would then light a candle that he carefully placed on a shelf on the wall. The flickering flame would quieten people. It was as if they feared their words might quench it. A little after that, Copernicus would start talking for real.

He talked in a gentle voice about the candle, about the cabin, the dust, the town. His visitors nodded in agreement as he progressed, not really noticing how his voice had changed, had gained a chanting quality. Neither did they notice how difficult it was to focus on the light, nor how their eyes began to close and their necks bowed.

Copernicus watched it all. Now was the moment to move backwards, back in time.

He talked about what had been, of the time when the sun was the pride of the sky and not reduced to this blur of light behind the grey layer that had replaced the once blue air, the time when sunlight nursed plants and plants fostered animals. In those days food tasted like the life that had created it and not like this weird, artificial nothingness that was grown in the foaming fermenting tubs of the eating houses and consumed in the dining halls by the residents of the town, at prescribed meal times, a contemptuous mockery of what had once been a joyful human union.

Copernicus had learned not to talk too much about what had been. It was too hard.

But he always finished with the same words. He asked his visitors to remember the good meals they had shared, to remember them in every little detail. The tickling smell of roasted meat, the crispy crust of newly baked bread. If asked to do so, he added other foods. A glass of good red wine, full of flavor, yet modest on the tongue. Chocolate cake made with nuts and oranges and a crunchy icing. The first strawberry of the summer, tasting like childhood itself.

“Next time you eat, this will be your meal. Please enjoy it.”

His visitors slowly came back, Copernicus giving them all the time they needed. He knew how hard the transition from the trance to the reality could be.

He also knew that the gift he had given them wouldn’t last. The luckiest of his visitors would keep the memory for a few days, would hasten to the eating house with a happy smile, even ask for a double helping which they would devour with such pleasure that their dinner partners would stare at them in amazement.

For others, the joy faded quickly. But almost everybody had at least one meal that was as it should be, as they remembered food to be.

The children, however, he couldn’t help. He had tried. But it was impossible.

They had no sensory memories to evoke, no neurons to fire, no reflections of the time that had been. It distressed him that the children, and their children’s children, were doomed to spend their entire life in this grey, lifeless, lightless world until the dust – perhaps one day – settled.

On this night, after the last of his guests had gone, he went outside to sit beside his round cabin with the little bottle of genuine whisky that they had given him. This was a gift valuable beyond measure. Twelve years of condensed summers slowly flooded his tongue with spicy warmth. He drank from the bottle while he scanned the sky.

In times gone by he had watched the stars as they emerged. Now he peered into the dust sky and wondered what had happened to the night. It would seem that even the true dark of night had been denied them. The multitudinous dust particles reflected a weak light that hovered through the air, making the dust even more visible after the sun had set than during day.

Behind the dust were the stars, and the planets, and the many other celestial bodies. He remembered them. Comets and moons and meteors. All were gone. It would be difficult to explain to the children and their children that there was anything at all out there, that the universe that had created their predicament existed.

In spite of it all, Copernicus had kept a certain sense of humor. Perhaps his distant namesake would have approved as he now leaned back his head and laughed loudly at the thought of the asteroid that had hit the Earth, crushed the city where it had landed, eliminating many more in the subsequent shock wave. The real impact had come much later, though, with the cloud of dust that had filled the atmosphere and effaced the light of the Sun. How long had it been?

He couldn’t remember. All he grasped in his drunkenness was the irony of it. The Universe had struck at them, had hit them hard – and they would never again be able to see it.

But no one answered.