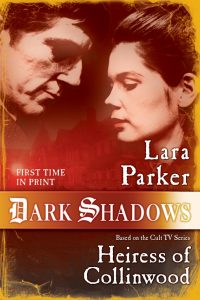 It’s time once again to return to yet another fine work of cinematic fandom. Dark Shadows: Heiress of Collinwood by Lara Parker will soon be available in trade paperback from Tor Books on November 8, 2016.

Fans of the cult classic Dark Shadows series which ran from 1966 to 1971 on the ABC television network should recognize the name of author Lara Parker. Having played the popular role of the iconic if not witchy Angelique Bouchard in the Gothic daytime soap opposite protagonist vampire Barnabas Collins (played by Canadian actor Jonathan Frid), Parker’s experience on the show gives her some of the most insightful perspectives on the original characters and provides a fresh take on some new plot twists.

Victoria Winters was an orphan in the original television series with an unresolved past that became the core of her character’s development. In this new installment, she once again is drawn back to the mysterious mansion with a slew of unanswered questions. To begin with, the entire Collins clan has gone missing except for the eccentric vampire Barnabas. Rest assured that this is not the same character portrayed by Johnny Depp in the 2012 Tim Burton version. No, in “true” Dark Shadow form, the characters are as mysterious as they are absorbing. Following the latest events, Victoria is suddenly left as the sole heir to the Collinwood estate and we, along with our hero, get to piece the puzzle together with her.

Like any good piece of literature, the strength of the story relies on the characters. Sure, the story is a complex mixture of familiar plots from past episodes and the newly developed events of the present, but the idea behind this new adventure does not hold together in the same tradition as the original cult classic without the emotional drama provided by Parker. In the end, it is still a soap opera. But it still has all the dark undertones new fans will appreciate and dramatic elements returning fans should welcome like an old friend.

On the screen, Parker’s skills were fitting for the role of Angelique Bouchard. But on paper, her storytelling is penetrating to the senses in a way the visuals could never do justice. Told in first person from Victoria Winters’s point of view, this fresh take from a different perspective brings yet another unique element to the lore of Dark Shadows.

Lara Parker has three other Dark Shadows novels to her credit, including Dark Shadows: Angelique’s Descent (1998), Dark Shadows: The Salem Branch (2006), and Dark Shadows: Wolf Moon Rising (2013). As Tor Books marches out this new addition to the ongoing series, Dark Shadows: Heiress of Collinwood by Lara Parker looks to keep the legacy going and open the door for many more.