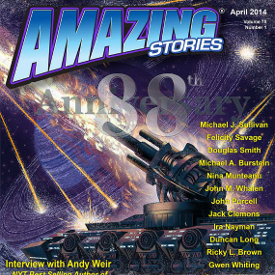 The Blog Team at Amazing Stories is quite the crew.  Most of them have never met each other except online, but they all share something in common: a deep and abiding love for and interest in seeing Amazing Stories come back as a market for short fiction.

A few months more that a year ago I reached out to the genre community to find people who might be interested in helping me bring the magazine back.  The response was so overwhelming, I ended up with over fifty volunteers – many of them well-recognized names in the industry and nearly as many relative new-comers.

We’ve since grown to a team approaching 150 people – authors, bloggers, artists, editors, reviewers, collectors, convention runners – fans of science fiction, fantasy, horror and any and every sub-genre of those fields you can possibly imagine.

We’ve made tremendous progress over the past fifteen or so months, progress that would not be possible if everyone involved hadn’t been willing to give of themselves in the finest tradition of fandom.

Several weeks ago it became apparent that behind the scenes work was approaching a conclusion and I realized that we might be able to make some significant announcements during the month of April – which also happened to be the 88th anniversary month of the magazine.

I asked if everyone was up to a a rush job of putting an issue together and – knowing our contributors the way I do – the response was unsurprising; offers of stories and artwork, articles and support came pouring in.

You are now looking at the results.  Fourteen stories, wonderful artwork, a science article in the best tradition of the magazine and an interview with one of the hottest new authors in the field.

Everyone involved should be justly proud of their efforts, as proud as I am.

Things may look a little rough at first – some features won’t appear until the end of the month and we’re trying to coordinate the magazine with the daily blog entries, but by the end of April everyone will be able to enjoy a complete issue of the magazine, jam-packed with the kind of stories we’re all looking for, peppered with new artwork, a worthy addition to the six hundred and nine issues that have gone before.

Amazing Stories is back folks and you have the Amazing Stories Blog Team to thank for that.  Give them all some hearty applause – and then get right back to enjoying everything we’ve prepared for you.

Thanks for joining us..